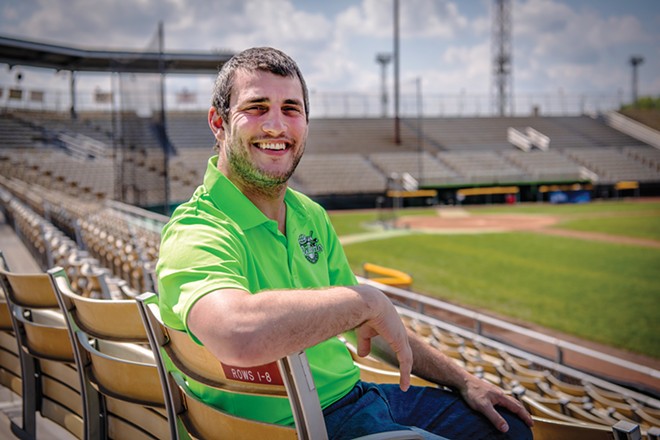 Photo by Tim Klasinski
Todd Miller has owned the Sliders since 2016. This year marks his sixth season as owner, if you count 2020.

For Todd Miller, owner and general manager of the Springfield Sliders, waiting for next year has become a far longer pause than the traditional six-month off-season. In 2019, his team endured a disappointing summer with a losing streak that reached record lengths. Even now, two years later, you can hear the distress in Miller's voice as he recalls the summer of 2019, when the Sliders started their Prospect League season competitively but soon endured a team slump when nothing, absolutely nothing, went the team's way.

When the 2019 season ended, Miller set about immediately rebuilding his Springfield Sliders. The Sliders play in the Prospect League, a wooden-bat, summer league of college baseball players who play for different schools and regions of the country but are united as a team by their love of baseball. For those just learning about the Sliders, a wooden-bat league allows players to use the bats similar to those used in the major leagues. Normally metal bats are used by college, high school and youth baseball because they rarely break. But they also strike baseballs far differently than wooden models. Major-league scouts welcome the opportunity to see how players handle wooden bats. The wooden-bat experience is exciting for players and even youth leagues, with 10-year-old players, occasionally have wooden-bat tournaments.

Another unusual aspect of the summer league is that the player roster is not built in the same manner as a Major League team. The collegiate player may only play one or two seasons in a summer league. In addition, they join a summer league only when their college season has ended. With tournaments and with the current COVID situations, some colleges will be playing into June. The Sliders regular season opens Memorial Day weekend. Miller and his new manager will be forced to fill their roster with temporary players until their full group of players are available. Some of those temporary players live in central Illinois and some may show promise and earn a spot on the Slider roster for the balance of the season. But either way, the season will begin with some uncertainty regarding when the Sliders will be at full strength.

In addition to the new players arriving in Springfield, the Sliders will have a new manager. They will be led by Terry McDevitt from Chatham, who brings experience as a teacher and coach at Glenwood High School along with a player-manager stint in Australia and coaching experience at Eastern Illinois University. McDevitt played college baseball for Eastern, was drafted by the San Diego Padres, played minor league baseball for the Padres and Phillies, and coached one season in Class A before coming to Chatham. McDevitt recognizes the community interest in baseball and is excited to welcome the community back to live baseball. He will be joined by pitching and assistant coach John Hillman, another Eastern Illinois product who pitched with the Mets and in Japan. Fans attending games will have no difficulty recognizing Hillman, who stands 6 feet 10 inches tall. Baseball trivia aficionados will know that Hillman is the same height as Randy Johnson, but one inch shorter than the tallest man in baseball history, former pitcher Jon Rauch.

If filling his roster and preparing for the season to begin was not enough, the Sliders must also pay attention to Gov. JB Pritzker and the Illinois Department of Public Health. Currently sports facilities can operate at 25% capacity. Miller hopes that the number will increase to 60% by June 1. That would allow the Sliders to have fans in attendance equal to their average turnout for past seasons. The Sliders will also have the technology to accept food orders in the concession stand and deliver the food to fans in their seats at Robin Roberts. No need to stand in line and miss any game action. If you have previously attended a Sliders game, you and your wallet know that concession prices are very reasonable. For the price of a beer in a MLB park you can enjoy a high-quality complete ballpark meal.

On the weekend of May 22 and 23, the Sliders will welcome fans to Lanphier Park for a mini exhibition season. They will play against local Springfield players in two "Field of Dreams" games. All tickets for those two games will be $3. Game time for both games is 6:35 p.m. On May 27, the Sliders welcome Quincy for opening night at 6:35, Danville on May 28 and Alton on May 30 at 5:05. Tickets are $8 for adults, $5 for seniors, military and kids. Anyone under age 3 gets in for free. The Sliders have an easy-to-operate webpage at www.SpringfieldSliders.com where you may purchase tickets and find information on promotions and games. Harry Caray said it best: "You can't beat fun at the old ballpark." Now that you can return to Robin Roberts Stadium it will be a great summer to take advantage of Harry's wisdom.

Although no fans were allowed at baseball in 2020, Stuart Shiffman of Springfield did manage to attend one Cactus League game in Arizona before the COVID shutdown. The first baseball game of his life was at Wrigley Field in 1955 when the Cubs played the Brooklyn Dodgers.