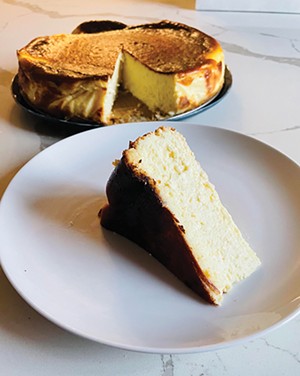 In 2013, three chefs from Chicago's acclaimed Alinea Group went on an R&D trip to Spain in pursuit of inspiration for upcoming menus. In San Sebastian, the culinary capital of Spain's Basque region, their tour guides were the head chefs of restaurants Mugaritz and Arzak. The five members of this entourage were all superstars of the culinary world. At the time Alinea was number 15 on San Pellegrino's list of the "World's 50 Best Restaurants." Mugaritz was number 4 and Arzak was number 8.

Upon their return from Spain, the Alinea Group chefs were challenged with recreating the cuisine they had just experienced for the upcoming menu of Next, Alinea's sister restaurant. Next, which had just been declared the "Best New Restaurant in the United States" by the James Beard Foundation, is a themed concept restaurant with a tasting menu that changes every four months. The results of their research became Next's Tapas Menu, a multicourse surrealistic reinterpretation of the dishes they had enjoyed in San Sebastian. The food critic of the Chicago Tribune wrote: "The dinner ends with a progression of desserts, and the one I can't get out of my mind is the torta de queso, whose dark, almost blistered skin masks two inches of creamy, almost liquid filling. It might be the best cheesecake I've ever had."

The Alinea chefs had gotten tips for making the burnt Basque cheesecake from the kitchen team of Mugartiz, but weren't able to get them to give up their recipe. After many hours of painstaking trial and error, they developed their own recipe for torta de queso. Because they were innovative and highly trained chefs, well versed in the science of molecular gastronomy, they had over-thought the process. The recipe they were trying to recreate was actually very simple, consisting of only five ingredients.

The burnt Basque cheesecake was the invention of Santiago Rivera, chef-owner of Bar Restaurante La Viña in San Sebastian. La Viña specializes in pintxos, savory tapas-like appetizers consisting of little skewers of cheeses, meats and pickles, served atop a slice of bread. In the 1990s, Chef Rivera wanted to add a dessert item to his menu. He needed something that could be quickly and easily prepared in his small kitchen. He developed a crustless cheesecake with a creamy, rich interior and a burnished, caramelized, deep brown top.  His burnt Basque cheesecake soon became wildly popular, and he freely shared his recipe with anyone who asked.

I first heard of the legendary cheesecake years ago, and I always assumed that a recipe that had its origin in the epicenter of molecular gastronomy would be way beyond my skill level. I was totally wrong. Last fall I spent a week training at Cúrate, a tapas restaurant in Asheville, North Carolina. I shared a workspace with Cúrate's pastry chef and discovered how surprisingly simple a burnt Basque cheesecake was to make.

Bring the cream cheese, eggs and cream to room temperature.

Grease the springform pan with butter. This will help the parchment adhere to the pan. Center the parchment over the pan and press it down against the bottom and sides, leaving 2 to 3 inches extending past the top of the pan. This will prevent the cheesecake from sticking and makes it easier to remove the cheesecake from the pan. The paper will be quite wrinkled. Place the pan on a rimmed sheet tray.

In the bowl of a stand mixer fitted with the paddle attachment, cream the sugar and cream cheese together, scraping down the sides of the bowl with a rubber spatula, until very smooth and free of lumps.  (Alternately, beat by hand with a large metal spoon for about 5 minutes. This is how it is done at La Viña.)  Add the eggs one at a time, stirring until fully incorporated. Switch to the whisk attachment and slowly add the heavy cream, whisking continuously, and add the salt (and vanilla and citrus zest if using). Sift in the flour through a fine mesh strainer and fold in gently.

Once mixed, pour the batter into the pan. Tap the pan against your counter to burst air bubbles.

Bake on the center rack of the oven for 40-60 minutes. Keep an eye on cheesecake to make sure it doesn't burn too much, but refrain from opening the oven door.

When the top of the cheesecake has risen up and is golden brown and almost burnt, remove the pan from the oven. If the top isn't browned enough when the bake time is up, put under the broiler for a few seconds. The center should be very jiggly when you shake the pan.

Transfer to a wire baking rack and allow to come to room temperature for about 30 minutes. It will fall as it cools. Refrigerate for a few hours or overnight before serving. This will help the center to set so it won't fall apart when you cut it. Do not remove the cheesecake from the parchment until ready to serve.

To serve, release and remove the sidewall of the springform pan and carefully peel away the parchment from the sides of the cheesecake. Allow the cheesecake to come to room temperature. To make it easier to slice, set a mug of boiling water next to the cheesecake, dip the knife into the hot water and wipe off quickly with a paper towel.

The cheesecake can be made ahead and refrigerated for up to three days.

Peter Glatz and the crew of Bertha Bus send greetings from New York, the 15th state of his culinary Tour de COVID.