Why did it take me so long to get back to fermentation? 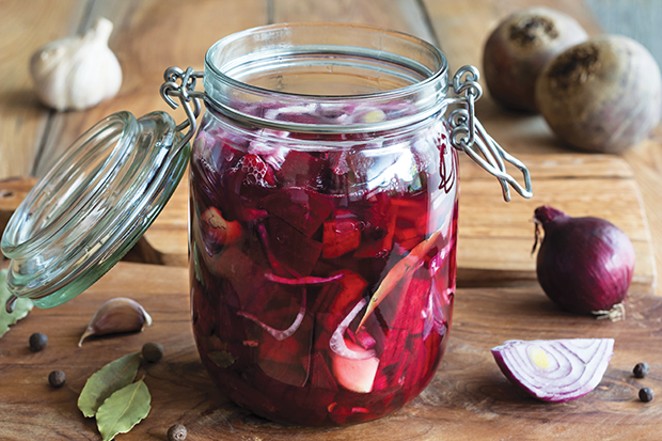 Ten years ago I became interested in fermentation and bought a book entitled The Art of Fermentation by Sandor Katz. It was a fascinating read but I confess that I was hesitant to start making my own sauerkraut and kimchi. My professional training as a dentist had made me a germaphobe and the idea of letting my food rot a bit before eating it seemed counterintuitive. Being an adventurous eater, I loved sauerkraut and kimchi, but instead opted for the presumed safety of consuming the pasteurized store-bought versions.

Yet my interest in home fermentation didn’t wane. I just felt I needed more guidance so I searched online for fermentation classes. I signed up for a two-day workshop taught by Katz at Dancing Rabbit Eco-Village, a commune in rural northeastern Missouri. When I was an adolescent in the late 60s, I was enamored by the concept of living in a hippie commune so this workshop sounded pretty cool to me. Dancing Rabbit had an inn with guest rooms for visitors that allowed pets so we were able to bring our new puppy, Toulouse.

The workshop took place over a rainy, cold St. Patrick’s weekend. Dancing Rabbit was located in rolling pastureland and, except for a small Mennonite community, was as far away from civilization as one could get in the Midwestern United States. The last 20 miles of our journey were on one-lane gravel roads. The winter thaw and spring rains had heavily saturated the ground. As we made our final turn onto the gravel road leading to the village, our Honda Accord rolled to a stop as it sunk into the gravel and mud. Our cellphones said “No Service” so I had no recourse but to start walking down the muddy country road seeking roadside assistance.

I reached the village and explained my predicament. “Oh you came in from the back road! You should have come in from the other road.” Sorry. I didn’t get the memo. Three of the villagers (they call themselves Rabbits) went to the barn and pulled a tarp off the village’s vintage Ford tractor. “I hope we can get ’er started. Been sittin’ all winter.” After a few attempts the tractor came alive and we set off to rescue my wife and dog who had been stuck in the car in the mud the last hour. This was undoubtedly the reason my wife was totally opposed to the idea of spending our ”golden years” in a communal village, an idea I still cling to.

Dancing Rabbit was an off-the-grid assemblage of mismatched dwellings connected by unpaved muddy paths. Two former Peace Corps workers had built the inn, made of straw bales and stucco, as a retirement project. It was solar-powered, had composting toilets, and its only heat was the fireplace in the main room. Despite its rustic nature, the guest rooms were very cozy and the bed was covered with a lovely warm feather comforter, which our puppy jumped on with his muddy paws.

Katz, who is considered the preeminent authority on fermentation, began his exploration of fermented foods as a way of strengthening his immune system after he tested positive for HIV. We learned that fermentation predates recorded history and that there are no known culinary traditions that don’t include fermentation. He explained that fermenting food preserved it, made it more digestible, supported our gut microbiome and enhanced flavors.

Over the course of the two days we learned how to make krauts and kimchis, kefir and kombucha, tempeh and seitan. Our St. Patrick’s Day meal, a vegetarian nod to corned beef and cabbage, consisted of a Reuben sandwich made with tempeh and sauerkraut on sourdough bread. We were surprised how much our faux Reubens resembled corned beef Reubens, except for Toulouse, who could not be fooled into thinking he was being served animal protein instead of fermented beans.

As I reread my notes from the workshop I can understand why I was slow to delve deeply into home fermentation. Fermentation techniques involve manipulating environmental conditions in a modern world that discourages bacterial growth. Some ferments, such as sourdough, require constant “feeding.” Others, such as sauerkraut, just like to be left alone.

CrossFit coach Mike Suhadolnik has long been a vocal promoter of fermented foods as a means of promoting gut health and emotional well-being. Realizing that the key to implementation of a concept or practice into daily life is making it simple and accessible, he periodically asks me to come up with easy recipes that even a non-cook can master. Perhaps the easiest is beet kvass.

Kvass is a fermented beverage of eastern European and Russian origin. It is mildly alcoholic and chock-full of probiotic benefits. And it is extremely simple to make. Homemade kvass is preferable to commercial kvass, which contains preservatives.
click to enlarge 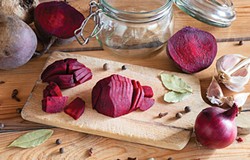 Beet kvass
Ingredients
2 medium or 1 large beet, unpeeled
½ teaspoon salt
3 cups of filtered, nonchlorinated water
A 4-cup vessel
Optional: A starter culture to speed up fermentation-- a teaspoon of kraut juice or whey (the liquid that sits atop natural yogurt)

Preparation
Scrub beets and cut into ¾-inch pieces.
Place into a clean jar and cover with a lid
Add the salt and water (and starter culture if using), leaving a ¾-inch headspace in the jar.

Allow to ferment at room temperature for 3-5 days, shaking and venting the lid daily
Decant the liquid and ferment 2-3 days more. (Save the fermented beets for other purposes)

Store in the fridge for up to two months

After a 40-year career as dentist, Dr. Peter Glatz has traded in his scalpel for a chef’s knife and is now traveling around the country in Bertha, his converted school bus, filling bellies instead of teeth.
© 2022 Illinois Times