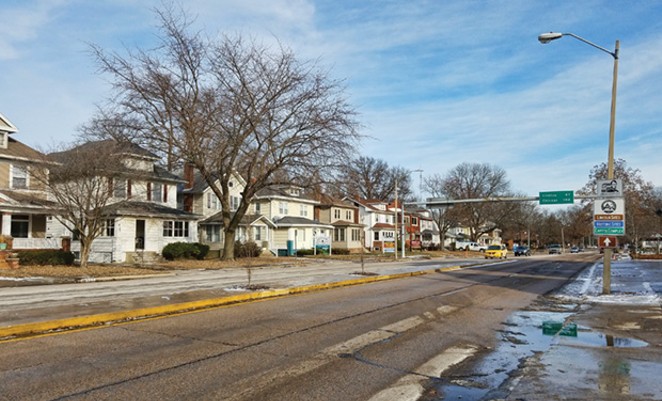 Organizers with the City of Springfield and the Springfield Regional Planning Commission held what amounted to an informal design charette the other day. Citizens were invited to imagine a future Springfield as part of the process of devising a new 20-year land use plan for the capital.

My eye was caught by remarks made to the State Journal-Register by Kurt DeWeese, president of the Historic West Side Neighborhood Association. He lamented the conversion into businesses of older homes along Spring Street near South Grand and hoped that the residential character of such neighborhoods might be preserved.

Don’t hold your breath, Mr. DeWeese. I made the same complaint myself in our edition of Dec.8, 1988, an abbreviated version of which appears below.

“Hermit crabs!” I said the words out loud – fortunately no one overheard me since I was walking down South Grand at the time, and pedestrians in that part of Springfield are as rare as Shakespeare lovers on the city council – in celebration. I had been trying for blocks to recall the name of the crustacean which houses itself by appropriating the abandoned shells of other creatures. As so often happens when I am abroad in the city, I was in search of a metaphor, in this case one which might describe the hodgepodge conversion of single-family houses into shops and offices.

You see them everywhere in Springfield, especially in the older neighborhoods. The ambitious middle-class Springfieldian apparently dreams of having her own insurance agency the way her mom dreamed of having separate bathrooms.

I am all for the incubation of small businesses. I am a small businessman myself. But the conversion of dozens of viable houses in viable residential districts into Mom-and-Pop (or more likely these days, Mom-and-Mom) enterprises is worrying. . . . Whatever the suitability of these properties for business – and most of them will be out of business before you can say “comprehensive plan” – they detract from the city as city.

The trend results in the dispersal of commercial land uses, which means that doing business in the city requires more automobile trips, more gasoline, more parking spaces than it otherwise might. It reduces the stock of low-cost housing, and in the process speeds neighborhood decline. Adjacent houses become less valuable as places to live (especially if they are demolished for accessory parking) and that discourages reinvestment; also, since their neighborhoods seldom offer expansive commercial possibilities, the pace of further conversion (and thus the opportunities to sell out) is slow, so for years these strips look like a block party after which no one cleaned up.

Springfield once was notorious for the eagerness with which it “spot-zoned” commercial uses into residential blocks. . . .We don’t see spot zoning much anymore. Instead, we have what might be called creep zoning, as properties near – not necessarily adjacent to – existing commercial lots are redeveloped for commercial use as well. On this particular walk I noticed three instances in just a nine-block stretch of South Grand (at Spring, Holmes and State streets) where businesses have opened on lots facing side streets which intersect South Grand but which themselves are residential in character. It’s as if, when the planners drew in commercial zoning along that thoroughfare, the ink bled a little.

The results cannot be justified on grounds of contiguity or coherence, except by a lawyer paid to do so; they are classic instances of the-area-is-going-to-hell-anyway approach to land use control. That such intrusions are not as egregious as those the old spot-zoning used to allow is small comfort; to say that Springfield’s promiscuous zoning policies have thus been reformed is like saying that a paroled bank robber has been reformed because he now robs nothing bigger than a gas station.

Most cities’ official land use plans have much more land zoned for such “higher” uses as multifamily residential or commercial than would be needed under the most extravagant projections of economic growth. Such plans are highly political documents, of course, and they reflect the urgent preferences of local landlords who like overzoning because it leaves them with the widest range of options for development. A plan is, of course, a guess about the future, and some provision must be made for the natural market-induced changes in land use. But consigning whole districts of single-family housing to commercial conversion is dumb.

Local government, which used to occasionally see its role as ameliorating the consequences of development, lately sees its role as a promoter of development. By allowing new businesses to locate where their chances of success are so marginal, the city manages to advance neither the cause of land use or of economic development. City hall, as a glance at Springfield’s land use plan will confirm, is not zoned for common sense.

The U.S. has no choice but to lead the world