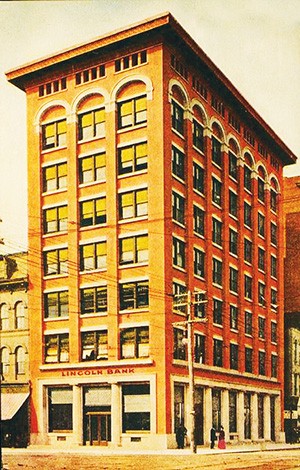 
The building was nearly 80 years old then. You know a building is on the downward slide when its tenants begin to include people like James Krohe Jr. But while it originally had a bank on the ground floor – the Lincoln Bank, which was quickly absorbed by the go-getters of the Sangamon Loan and Trust who moved it to a different building – it was never prime office space. Its six upper floors were occupied from its opening in 1906 by small men making small livings doing small things, mostly peddling real estate, get-rich-quick investments, cheap loans or car insurance. For a while its roster included a chiropodist, which gave the joint a little class, but he moved up by moving down, into the basement of a shoe store.

For a hundred bucks a month, I got my business name on the lobby directory and on the office door, and a room big enough for an office desk, a couple of filing cabinets and a reading chair. While clean and functional, the place had the ambience of the do-it-yourself basement conversion – a perfect place, then, for a do-it-yourself social critic.

It was not the most romantic of the studios but it was the most convenient. The post office was across the street, Shadid’s was a half-block away, and Lincoln Library just two blocks. The old Coe’s Book Store, since doing business as Haines & Essick, was still in the old lobby space, and while its book selection had shrunk the shop also offered basic office supplies. That mattered if you are as poor a typist as I am; had Bette Nesmith Graham not invented Liquid Paper, I would have had to quit writing and earn an honest living.

As designed by Springfield architect Samuel J. Hanes, the Ferguson was nicely proportioned, with a pleasing mix of materials, although a purist might quibble about the Doric columns. The Sullivanesque buildings that Hanes borrowed from were brick or rusticated stone right down to the sidewalk; no doubt the polished stone columns that lined the Ferguson’s first floor were attached to dignify the bank inside.

Such buildings seldom had columns on them, but they borrowed from classical columns, the structure having a pedestal (the story-and-a-half ground floor), a shaft (the six floors above it) and a capital (an ornamental frieze and cornice). Modeled it might have been after Greek and Roman temples, but in spite of its outward appearance it is a steel-frame building merely faced with brick that went up fast and was “as nearly fireproof as a building can be constructed.” Most of my readers are old enough that they are no more shocked to be reminded at how little a dollar today is worth than they are at the sight of a woman’s ankle, but the Ferguson Building, equipped, cost 150,000 1906 dollars.

The owner, by the way, was a merchant who for many years ran a successful crockery and glassware store at that corner, which he tore down to make way for the present building. By then he was a top official at the Bunns’ Marine Bank, his career as a banker not having been hindered by his being the brother-in-law of that firm’s patriarch, Jacob Bunn. Ferguson’s namesake building was handsome in its youth – weren’t we all? – but it aged badly at the hands of later owners. The building lost its cornice in 1948 when the original proved too expensive to repair. Sometime in the 1950s (I think) the street-level façade was “modernized” by removing its Doric columns and installing a fancy corner entrance and a canopy and plate glass and aluminum trim. A building with an all-steel frame, as the Ferguson was in 1906, was modern; a building with new windows and doors is merely different. As for that difference, the Ferguson (as would almost every shopfront in downtown Springfield) suddenly looked like a ’59 Cadillac had crashed into the entrance.

It got worse. The interior had the ambience of the do-it-yourselfer’s basement conversion (the perfect ambience for a do-it-yourself social critic like me). When I moved in in the mid-1980s, the building still bore the louvered facade added in 1964. This made the building look younger as convincingly as that bad toupee made your uncle look younger, although in defense of your uncle, he probably never had pigeons roost in it. The birds left crap all over the façade and the sidewalks below, which established a kinship between us; I can recognize a fellow critic when I meet one.