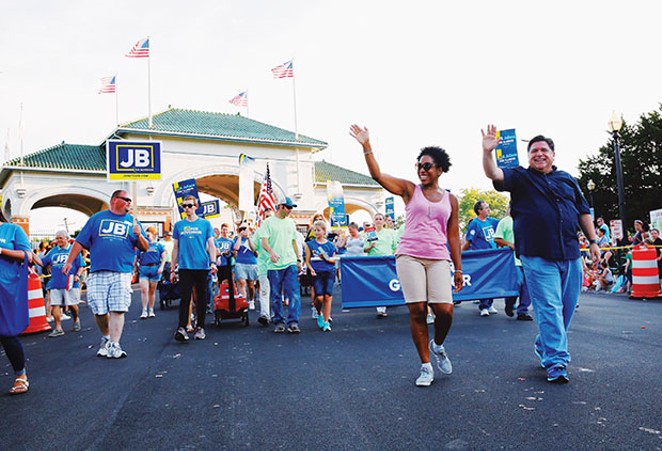 Jay Robert “J.B.” Pritzker, D-Chicago, lives by the mantra that the “the early bird catches the worm.” “I’m a guy who gets up pretty early in the morning, and my staff hates it because I’m texting and sending emails at 4:30 a.m., but you can get a lot done at the quiet dawn of the morning,” the 53-year-old businessman said in a one-on-one interview with Illinois Times, held earlier this month in Chicago.

Since April 2017, Pritzker has mounted an ambitious bid to unseat Gov. Bruce Rauner in the Nov. 6 general election. For nearly an hour, Pritzker offered candid insights on his campaign, meeting voters and overcoming his election loss in his previous bid for public office. Pritzker responded to attacks from his opponent, while detailing his own plans to transform Illinois if elected.

Despite the labor-intensive campaign, Pritzker relishes his daily schedule, noting the significance of meeting voters personally. “To me, I think voters want to know who you are and they want to feel you in real life, so my days have been full,” he said. “I haven’t taken very much time off at all, and we’ve been at this for about, I guess since I’ve started seriously thinking about looking at running, I’d say 20 months. I announced on April 6, 2017, and here we are, going into September 2018.”

Though he is known as a businessman, politics has long been a passion of Pritzker’s. From an early age, Pritzker recalls campaigning on behalf of Democratic candidates with his mother, Sue. “I didn’t quite know enough as to why we were knocking on doors, but I was with my mother and it was a good feeling to be with her and what she was doing seemed important,” he said. “My parents were extraordinarily important in setting my values and setting me up in a direction where I would fight for progressive values, working families, children and especially those who are powerless.”

Over time, Pritzker has become a formidable behind-the-scenes player in the Democratic Party. In the late 1980s, he served as a legislative aide to U.S. Sen. Alan J. Dixon. In 2008, he was the national co-chairman of Hillary Clinton’s presidential campaign, eventually helping to align Clinton with Barack Obama after he defeated her for the Democratic nomination and went on to win that year’s election.

Pritzker created Democratic Leadership for the 21st Century, a national organization with the purpose of attracting voters under the age of 40 to the Democratic Party.

Pritzker meeting with supporters at the Illinois State Fair.
“Almost every election, even long before I was running for anything, I knocked on doors for candidates, made phone calls or phone-banked for candidates that I thought were important to help get elected,” he said. “Of course, I was financially supportive as well as giving up my time, because I think both of those facets are extraordinarily important if you want to elect good people to public office.”

In 1998, Pritzker campaigned for public office for the first time, running for the vacant Illinois Ninth District congressional seat, a bid that ultimately proved unsuccessful. “I believed back then when I was running that when you put your ideas out there and you’re passionate about them, people would be drawn to your candidacy just on the ideas themselves,” Pritzker said in retrospect. “While I got a lot of support from people who believed in me and my ideas, I really didn’t have much of an organization put together. I hoped that by forcing effort and ideas, people would engage with my campaign.”

Despite the defeat, Pritzker said that he was grateful for the experience, believing that the lessons learned would be applicable in the future. “I learned honestly that when you try and don’t succeed in something, you have to examine everything about it and ask ‘What could I have done better?’ he said. “I just think, in life, when you try and don’t succeed, it’s just a learning experience for the next time.”

According to the Aug. 21 NBC News/Marist poll, Pritzker leads Rauner by 16 percentage points, 46-30. Despite the double-digit lead, Pritzker says he places little faith in polls. “Honestly, I pay no attention to the polls, and I am running this race like we’re five points behind,” he said. “The polling numbers show that I’m still going like I was 20 months ago. I’m getting up early in the morning, I’m starting early, and doing everything that I can to touch voters and make sure people know what I stand for.”

Pritzker faces continued attacks from Rauner. Recent Rauner TV spots claim Pritzker will raise taxes if elected governor. In response, Pritzker claims that the governor mischaracterizes what he wants to do with taxes. “I want to make taxes more fair,” he said. “That means lowering taxes for people in the middle and lower-middle class, because they’re paying the same rate as wealthy people in the state.”

Pritzker elaborated on the imbalanced tax structure experienced in different income brackets. He suggests that wealthy Illinoisans such as himself and Rauner should pay a higher rate. “It’s not right that someone who’s a child care worker or someone who’s a construction worker pays the same tax rate as someone who’s the CEO of a major corporation,” he said. “I want to change the system so we can give a break to the middle income levels and lower income levels and raise taxes on Bruce Rauner, myself and others who are wealthy, so that we can pay for our schools and balance our budget.”

J.B. Pritzker: “Win or lose, I have learned a lot.”
Pritzker related the story of Emily, a construction worker from Monroe County. A single mother of two, Emily spends a third of her earned income on child care. In 2015, Rauner implemented restraints to the Child Care Assistance Program (CCAP), a decision that child-care advocates say resulted in reducing state funding by 90 percent. Because of the CCAP cuts, Emily often struggles to afford quality child care while maintaining her job.

Last month, Rauner signed two bills designed to increase stability for the thousands of Illinois families on CCAP by curbing future drastic cuts. However, Pritzker believes that the plight faced by Emily is proof that the damage caused by those cuts is irreversible. “When you have to quit your job, you don’t get child care, and often people have to quit their jobs so they can take care of the kids,” he said. “In Emily’s story and stories just like hers, it’s particularly the kids who suffer when Bruce Rauner fails to do his job, and that motivates me to want to beat him and change the system.”

Regardless of the outcome in November, Pritzker said that the journey of running for governor is something he will cherish for the rest of his life. “I’m honored to be the Democratic nominee for governor. Win or lose, I have learned a lot,” he said. “I have met amazing people in this state, and they are good, decent, hard-working people who are striving to make a better life, and who care about their community.”

Pritzker concluded that the affirmations he’s received from voters throughout the campaign stimulates his drive to bring optimism if elected. “We live in a state where people actually care about each other, and they want to solve problems and work together to get things done,” he said. “I’m energized by that, and I know that as governor, I can get a lot done to help the state get back on the right track.”

Alex Camp is a master’s degree graduate in Public Affairs Reporting from University of Illinois Springfield. He is currently a freelance journalist. Contact him at acamp4@uis.edu.