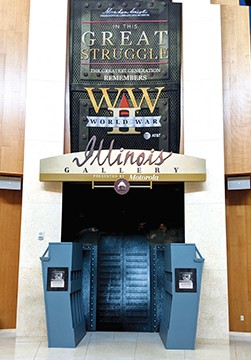 Photo courtesy of the Abraham Lincoln Presidential Library and Museum
The doors of the landing craft open, and the beach of Normandy looms ahead. Shells explode in the water and as the sound of machine gun fire beats a merciless tattoo through the hazy air. You round the corner, and suddenly World War II comes to life before your eyes through the words and objects of those who lived through it. You have entered “In this Great Struggle: The Greatest Generation Remembers WWII,” the blockbuster new exhibition at the Abraham Lincoln Presidential Library and Museum.

In creating the exhibition, “we took the perspective of the average person, whether you’re a soldier at the front or a wife at home or Rosie the Riveter making trucks,” said ALPLM oral historian Mark DePue, one of the driving forces behind the exhibition.

Recorded interviews with 21 people who experienced the war firsthand form the heart of the exhibition. Some were on the front lines, like Charles Sehe, who served in the navy from Pearl Harbor to VJ day; or on the home front, like Betty Wrigley, a real-life “Rosie the Riveter” who worked in a factory making transport vehicles. The audio footage from those interviews has been paired with archival footage of the World War II era to create a breathtaking series of documentaries that allow the viewer a firsthand glimpse into one of our nation’s greatest military struggles.

“The oral histories bring it to life,” said ALPLM registrar Carla Smith, one of the exhibition’s coordinators. “We could have done an exhibit with artifacts and images, but it wouldn’t have told the story as well.”

Nevertheless, the artifacts and images are powerful in their own right. Some are small, such as the stone picked up on Utah beach by the 24-year-old soldier who landed there a week after D-Day and carried with him as he fought his way through France. Some are large, like the 1942 Indian motorcycle developed for use in the North African theater. Some are amusing, like the beer mug owned by Vincent Sperenza, who became a legend during the Battle of the Bulge when he brought his wounded buddy beer in the only container he could find – his helmet. And some are gut-wrenching, like the handmade rag doll that was little Mary Ann Ladic’s only possession while she was a prisoner in Japanese internment camps, or the gold star flag that the parents of Private First Class Harold Sakes displayed in their window after he died of malaria in the Pacific theater.

“The gold star speaks volumes about the kind of sacrifices people make during wartime,” said DePue.

Among the items on display are photographs from Kenneth Hagan’s personal scrapbook of himself, his wife Bonnie, and his P51 Mustang fighter plane, “My Bonnie,” as well as the forged identity papers he used while trapped behind enemy lines after crash-landing in France.

The exhibition was originally intended to be a display of WWII propaganda posters from the ALPLM’s collections scheduled to coincide with the 75th anniversary of D-Day. But the scope of the project quickly evolved; first by adding in oral histories, then turning those oral histories into documentaries, and then pairing them with an ever-increasing number of artifacts as more and more gems came to light in the museum’s archives.

For Mike Casey, the exhibits chief, the motivation to do justice to the story of World War II was personal. His grandfather landed at Normandy during the third day of the D-Day invasion.

“I admire my grandparents, and am blown away with what they accomplished in this world. In my opinion it is the greatest generation, and we had to tell the story right,” said Casey. He was especially moved by Betty Wrigley’s experience working in the factory at Bremerton Navy Yard in Washington as his own son is in the navy and is currently stationed at Bremerton.

Ultimately, DePue hopes that visitors to the exhibition come away wanting to learn more about World War II and the people who lived it.

“For me, it’s always been about the stories,” he said. –Erika Holst