The agreements of Nov. 11 "Armistice Day" set the stage for a second world war 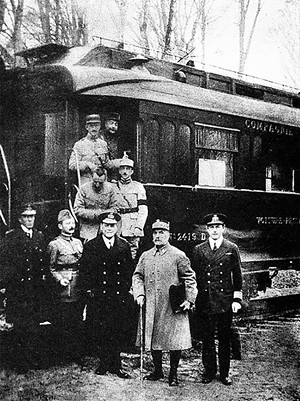 Photograph taken after reaching agreement for the armistice that ended World War I. This is Ferdinand Foch's own railway carriage in the Forest of Compiègne. Foch's chief of staff Maxime Weygand is second from left. Third from the left is the senior British representative, Sir Rosslyn Wemyss. Foch is second from the right. On the right is Admiral Sir George Hope.

It was called the "Great War" and the "war to end all wars." Unfortunately for mankind, there were even greater, and more deadly, wars to come. Though overshadowed today by the Second World War, the effects of the first world conflict defined the remainder of the twentieth century.

The war ostensibly began when Austrian Archduke Franz Ferdinand was assassinated in Sarajevo on June 28, 1914, by a 19-year-old Serbian liberator named Gavrilo Princip. The killing sparked a firestorm of diplomatic tensions between most European powers. Though Princip's shot was the catalyst, the causes of the war were decades in coming.

"It's fair to say there was a growing amount of tension between European nations before the assassination," said Mike Vietti, marketing and communications manager of the National World War I Museum in Kansas City. "Conflicts such as the Balkan wars increased tensions, and it kept building."

While Europe was embroiled in a devastating global conflict, the United States remained neutral, the reflection of President Woodrow Wilson's belief that America had no place in a foreign war. The slogan of "he kept us out of war" helped Wilson gain reelection by a slim margin in 1916.

However, diplomatic tensions heightened with the sinking of the Lusitania by a German U-boat in May 1915, costing 128 American lives. Subsequent unrestricted German submarine warfare on Allied vessels and U.S. cargo ships is cited by many as an impetus for American entry.

American support for war was further galvanized by an inflammatory telegram from German Foreign Minister Arthur Zimmerman to Mexico. Intercepted by British forces in January 1917, the telegram encouraged Mexico to declare war on the U.S. and persuade Japan to join the fight as well. In return, the Germans promised subsidies and assistance in reclaiming territories lost in the Mexican-American War of 1846-48. The U.S. declared war on Germany on April 6, 1917.

The massive scale of World War I brought sweeping developments in military technology. Trench warfare was widespread, and led to the development of a new war tool – the tank.

"Tanks were created to combat trench warfare," said Vietti. "The tank came as a result of World War I, without question. Also, radio communication, which was not a factor beforehand, came to the forefront. In many ways, the cellphones of today may be traced to the development of radio technology in World War I."

Another new method of warfare was poison gas, which inflicted hideous suffering on victims. The use of airplanes, invented scarcely a decade before, also evolved quickly. "At the start of the war, airplanes were used mainly for scouting," remarked Vietti. "By the end, their role in combat took new shape, and dogfights were common."

Casualties on both sides were staggering. Estimates of military dead range from 8.5 million to 10 million, including 2 million Germans, 1.8 million Russians, 1.4 million French and 900,000 British. Over 20 million troops were wounded.

Civilian deaths were equally appalling, including 2 million each in Russia and Turkey. Germany suffered 700,000 civilian losses, while Serbia lost 600,000 and Romania 500,000.

An armistice was signed on Nov. 11, 1918, now celebrated in America as Veterans' Day. However, scholars have pointed to many flaws in the various peace agreements, and believe the resulting political and economic upheaval paved the way for a second world war two decades later.

"World War I was the signature event of the 20th century," said Vietti. "Many of the events that followed, including World War II, may be traced to the effects of the first world war. The women's suffrage movement took shape then, as women took the place of men in the work force during the war effort and were empowered because of it.

"Things we take for granted in our daily lives, like car radios, cellphones, also had their roots in World War I," added Vietti. "Even something as simple as wristwatches, which were worn only by a few women before the war, came into popularity because they were used in service. The war affected humanity in countless ways, which we still experience today."