Will trade minestrone for a place to park

A few years ago I was at my campsite at Summer Camp Music Festival when a young man approached me carrying an empty grocery bag and asked if I had any charcoal I could spare. I had plenty so I put some in his bag. He thanked me and then asked if he could possibly use my grill. I was between meals so I let him borrow my hibachi. He left to start his fire. A while later he returned and asked: "Would you by chance have any hamburger meat or hot dogs you could spare?"

This incident with the young con artist reminded me of the old European folk tale of stone soup. Stone soup is the story about a hungry traveler who entered an impoverished village seeking food and shelter but was refused by the xenophobic villagers. The clever traveler gathered some wood and started building a fire in the town square. He pulled a cookpot and a smooth stone out of his backpack, drew some water from the well, and called out to the villagers: "I'm going to prepare a delicious stone soup for us all to share. Does someone have an onion they could spare?" He added the onion to the simmering pot. The other villagers became curious and one said: "I have a few carrots I could contribute." Another villager donated a piece of salt pork. Yet another offered up a few potatoes. Before long the traveler and villagers were all enjoying delicious stone soup.

My year as a chef in Oklahoma has ended. My apartment lease was up. My next position as a live-in innkeeper and chef in Michigan's Upper Peninsula has been pushed back from May to September so I'm living in my bus, hopscotching my way across the country, camping in people's driveways in exchange for preparing meals for them and sharpening their knives.

Photo by Ann Shaffer Glatz
minestrone can be made with whichever vegetables you have in hand.

Sourcing ingredients has been tricky. I minimize visits to grocery stores so I've become like the stone soup traveler. Before I left Oklahoma I stocked the pantry of my bus with plenty of onions, garlic, dry beans, pasta and canned tomatoes. As I camp my way across the country, one driveway at a time, I ask my hosts if they have any fresh vegetables I can use. In most cases I've been able to source enough veggies to concoct a tasty and nourishing minestrone soup.

Minestrone is a hearty vegetable soup of Italian origin. Its core ingredients are beans, celery, carrots, onions and stock. The stock can be meat-based or vegetarian. It often includes rice or pasta. Beyond those ingredients, there isn't really a set recipe. Ideally the composition of your minestrone should change with the seasons and reflect what's currently available. What follows is more of a method than a recipe. Aside from a few pantry staples, you use what you have on hand. Sometimes pancetta or bacon is added. I've used zucchini, summer squash, potatoes, peas, fennel, radishes, kale and chard. It's a very adaptable preparation. As with most stews, it's even better the next day and will keep for a week in the fridge.

Preparation:
Drain the presoaked beans, put in a stock pot and cover with a couple inches of water. Add the onion half, the quartered carrot, the quartered celery, the smashed garlic cloves, the parsley stems, and a bay leaf. Bring to a boil and reduce to a simmer. When the beans are finished cooking, about 40-60 minutes, remove and discard the vegetables. Drain the beans and save the cooking liquid.

Wipe clean the stockpot and prepare a soffrito, a flavor base made by slowly cooking chopped onions, carrots and celery in animal fat or olive oil. If desired, chopped pancetta or bacon can be added at the beginning and the vegetables can be cooked in the rendered fat. If making a vegetarian version, the vegetables should be cooked in olive oil. After the vegetables are soft but not browned, add the minced garlic. The cooking should be watched carefully to avoid burning the garlic. (If the garlic burns, discard the veggies and start over.)

Add the chopped, canned or fresh tomatoes and cook until most of the liquid has evaporated. Then add the beans and their cooking liquid to the pot. If you have a block of Parmesan, cut off a piece of the rind and add it to the soup. After the soup simmers about 10 minutes you can start adding in any remaining vegetables in sequence according to their density and cooking time. For example, diced potatoes, fennel, kale, celeriac go in early. Spinach and chard should be added later. If the minestrone is to be consumed the day of preparation, pasta can be added and cooked until al dente. If the soup is to be eaten later, add the pasta after rewarming.

Before serving, remove and discard the Parmesan rind. Serve with grated Parmesan.

At the time of this writing, Bertha Bus was en route to Wisconsin to shelter-in-place in a friend's driveway until he got the news that one of his friend's coworkers tested positive for COVID-19. So until other options open up, Bertha Bus will be surviving the apocalypse at a KOA campground in Kankakee.

How to cook a wolf 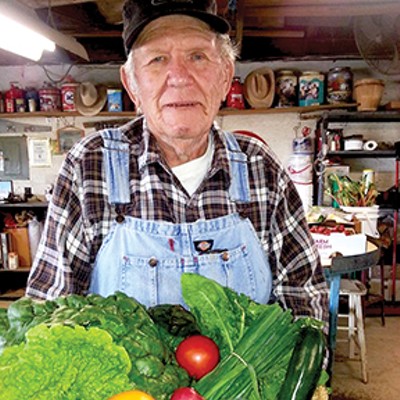 How to cook a wolf