Life and death while seasons turn 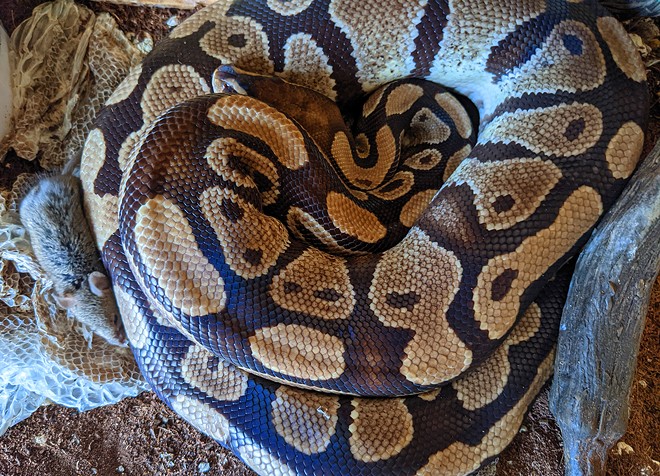 Monty snuggles with a mouse, his first roommate.

I know this not because of weather or roar of lawnmowers. I know because Monty has moved.

For 15 years now, my pet snake has been reliable as Halley's Comet, Old Faithful and that 1994 Ford Taurus I never should have sold. Each fall, around Halloween, Monty Python slithers under one of his fake rocks – he (or she) has two from which to choose – and stays there until winter ends, coiled and motionless. Perhaps he is hibernating, but snakes lack eyelids, so whether he's asleep is hard to tell. About this time of year, he sticks snout out from beneath the rock, his way of saying "Feed me." Not exactly Punxsutawney Phil, but less trouble than a groundhog.

Nothing can rush this rite of spring.

Not long ago, I caught a mouse. Nora, my freeloading cat, showed no interest when I dangled squeaking prey within paw's reach. Not wanting to waste a perfectly good rodent, I put it in Monty's cage. He'd last eaten five months prior.

Monty always has been provided euthanized rats, frozen, then thawed in baths of warm water until reaching a temperature right for a rodent instantly dead from massive heart attack and so seemingly fresh to a pea-brained python craving live or the next best thing. This, I thought, should be interesting.

My snake remained under fake rock while the mouse sniffed over there and then over here, seemingly more curious than frightened. It did not scurry, nor did it seem panicked, as it moved about the enclosure, nose a-twitch, checking things out. It examined most every corner and cranny before crawling beneath the resin fake stone to join Monty – the last place it hadn't investigated.

A python getting serious isn't silent. I awaited the "Whap!" that happens when a snake launches – even with carrion, they go through the motions, digging fangs into flesh while wrapping body around body, constrictor fashion, all in a millisecond. I waited. And waited. And waited some more.

Finally, I reached into the cage, carefully, having learned that a hand near snake in vicinity of rodent can be dangerous to thumb. Like anyone, pythons make mistakes. I flipped over the rock. Monty and mouse appeared to be snuggling. He looked awake, or at least looked up, with mouse unperturbed, tight by his side. I put the rock back and left them to their business.

An hour or so later, Monty made a rare late February appearance, crawling from beneath the fake rock, heated by a thermostat-controlled thingy, to underneath the pretend rock, unheated, on yonder side of cage. The mouse stayed put. I found it dead the next morning, under the rock where it had bedded down with Monty. No autopsy was performed.

Monty remained on the cold side of his cage until last week, when he looked out, expectant, and got what he was looking for. There is one less rat in my freezer, and will be many fewer, if history holds, as spring and summer run their courses. It is hard, I guess, to teach old snakes new tricks.

WANT TO GET VACCINATED? Consider getting arrested. Sangamon County Sheriff Jack Campbell reports that shots weren't particularly popular last week when inmates were offered the Johnson and Johnson jab. One third – 111 of 336, to be precise – of prisoners locked up on April 7 signed up, but 28 changed their minds when their date with the needle arrived. Another nine, plus 14 jail employees, took their place – all told, 106 folks received shots. The next round of vaccinations, the sheriff says, will happen when 10 prisoners raise their hands. Every jail employee has been offered vaccination, according to Campbell, but only half of the staff has taken advantage. Somewhere, Jonas Salk and Louis Pasteur, not to mention more than 21,000 Illinoisans dead since pandemic began, roll in their graves.

IN THE WIND: Work has started on a Morgan County wind farm expected to produce sufficient electricity to power more than 100,000 homes. Crews are building roads and foundations for 107 turbines that should be in place in eight months, according to an email from Mas Jabrixio, spokesman for Apex Clean Energy, a Virginia-based company that secured necessary permits from Morgan County late last year. The project will stretch over 36,000 acres. Proponents once had plans for turbines in Sangamon County, where opposition was staunch; Jabrixio writes that none are planned outside Morgan County. "We've been dealing with this off and on for 10 years," says Sangamon County Board Chairman Andy Van Meter. "There may be some places in Sangamon County where they're appropriate, but I think they're most appropriate in areas that are extremely rural in character."