In this show is a six-foot-tall cabinet carved out of wooden cigar boxes during the winter of 1910-1911 by itinerant Charles Bosquet, who created this piece in exchange for lodging that winter. Bosquet was moving through Will County and had stopped at Julian Sprimont’s farmhouse to request room and board.

Typically tramp art was made from carving cigar boxes with a penknife to create three-dimensional objects. This piece was created to house a battery-operated Sears Roebuck & Company crystal radio. It is a curiosity worth seeing. This piece is also unusual because we know the name of the artist, according to Jim Zimmer, Director for Art and History for the ISM.

The dedicated staff of the Illinois State Museum has pulled together a fascinating group from its collection of 35,000 pieces of fine art and decorative art for this show, despite threatened closure of all ISM facilities by Gov. Bruce Rauner. Many items are being shown for the first time.

“The Kipp Family Tree” is an 1850 charcoal and watercolor drawing on paper that documents the family back to Jacobus Kipp, born in Holland in 1632.

As for decorative arts, Bertha Stenge’s “The Bible Quilt,” made in 1936 and exhibited for the first time, takes the cake. Made of cotton, linen, silk and satin, it depicts 12 scenes from the Old Testament, including Noah’s Ark, David and Goliath, Jacob’s Ladder and Daniel in the Lion’s Den. ISM staff restored this quilt, and it is magnificent.

Galesburg quilter Jean Lohmar’s 2006 quilt, “Oliver Twist,” is machine appliquéd and quilted and based on stamped tin ceilings in commercial buildings from the 1800s. The colors and workmanship in this quilt are remarkable. 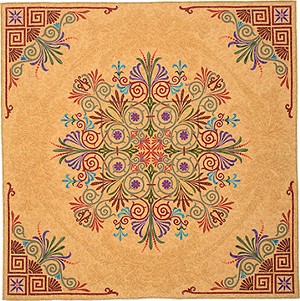 Aficionados of collectible glass will appreciate the case of nine pieces of Higgins fused glass from the mid-20th century. Frances and Michael Higgins met at the Chicago Institute for Design and opened their business in 1948. These are particularly detailed examples of fused glass.

One of the museum’s newer acquisitions is Robert A. Ketchens’ painting “Decade of Hope,” a portrait of an African-American girl holding a diploma from Southern Illinois University. It was previously displayed in the Statehouse office of former Lt. Governor Sheila Simon.

Founded in 1877, the Illinois State Museum did not begin collecting fine art until 1928. The ISM was the first venue to host an exhibit of 400 paintings, sculptures and prints from the Illinois Academy of Fine Arts in 1926 before a portion of this exhibit traveled on to 14 other Illinois cities and towns. The ISM purchased a number of these works in 1928 and others were donated for its fledgling collection. Fifteen landscapes and portraits from the 1920s are displayed.

I invite Governor Rauner, Speaker Madigan and Senate President Cullerton to walk over to the Museum and take a look at some of the remarkable examples of Illinois history and culture. And then figure out a way to keep this internationally respected museum open.

A reception for the public to view the Spectrum exhibit will be held Thursday, Sept. 3, from 6 to 7:30 p.m. Spectrum will run through Sept. 25. The museum is open 8:30a.m.-5p.m. Monday through Saturday and from noon-5 p.m. Sunday.