Before describing many causes that allowed the triumph of the Taliban in Afghanistan, let's state what our country did right. We brought justice to Osama bin Laden by eliminating him and we defeated al-Qaida for their heinous attack of 9/11. We have protected our land from further al-Qaida attacks. Most important, our military forces fought under arduous conditions against an enemy who soon wove themselves into the fabric of the countryside. Though it is painful to unpack the failure of two decades of valiant service of our troops and officials and the expenditure of over $1 trillion of our resources, we must learn from our failure to establish a secure and democratic government in Afghanistan.

Many are the causes of that failure.

First in importance is the abject failure of the Afghan elites to create the trustworthy leadership to inspire their countrymen and army to support and sacrifice for their country. From the start, the Afghan leaders poured their new-found American riches into their traditional vessels of government – a decentralized, tribal and warlord way of running their country. This was ingrained and hard to change. It had protected them from foreign invasions – from the two British attempts in the 19th century, to the Russian attempt in the 20th century, to the American "help" in the 21st century. In short, what we call corruption, which was rife, they call lubricating normal channels of governance. The Afghan leaders deluded themselves in thinking that the U.S., caught up in the great struggle with Russia, would never leave.

Second, there was the duplicity of Pakistan. In Malaysia after the Second World War, the British demonstrated that an insurgency lacking a safe haven for resupply and troop respite could be defeated. The obverse is that even a competent government will be unable to defeat an insurgency that has access to a neighboring country for rest, resupply and medical support. Unfortunately, this law of safe haven-insurgency was confirmed by the U.S. in Vietnam and now Afghanistan.

Third, the larger geopolitical stage for our conflict was beyond our control, namely, the deadly fear and rivalry between India and Pakistan. Pakistan saw its national interest as requiring and even controlling a friendly government in Afghanistan to protect it from Indian control. It also sought to keep on the good side of the U.S. to obtain aid. That's why Pakistan played a treacherous double game of supporting the Taliban. They gave them a safe haven for their troops, especially in winter, offered them resupply and medical support, while allowing merciless Taliban attacks on our tortuous truck supply lines passing through Pakistan. The Taliban were so strong and merciless they even carried out terrorist attacks on Pakistanis within Pakistan. Thus Pakistan was a key barrier to U.S. victory, since their support allowed the Taliban to fight on as long as needed.

Finally, President George W. Bush, who rightly defeated al-Qaida, did not fully weigh the difficulties of fighting on in Afghanistan to create a friendly, democratic country, even after starting the Iraq war. His administration, especially Vice President Cheney, had no plan for a victory in Afghanistan except the old Vietnam plan: assume superior U.S. military and modern technology will do the job. We did not learn from our previous experience in Vietnam. Furthermore, we armed the Afghan army with advanced and sophisticated weapons and equipment largely unfit for the guerilla war they had to fight. As in Vietnam, top military brass often quashed accurate reports coming from the field, telling Washington instead that we had "turned the corner."

How many corners did we turn? Clearly, the desertion rate within the Afghan army indicated morale was miserable. Clearly, corruption drained off both payroll and equipment originally intended for the troops. With Vietnam, fear of being considered to have "lost" a war kept LBJ in the war. Likewise it kept Obama and Trump in Afghanistan. However, President Biden recently spoke forcefully to the American people about why continuing an unwinnable war was an immoral policy, for our soldiers and for our country.

Yes, the planning and execution of the final U.S. pullout were appalling. Even an ordinary citizen reading the reports for the last six months could easily conclude that the bottom might fall out without U.S. troops to bolster Afghan forces. But this essay is about the extended U.S. drama in Afghanistan, not the concluding act.

What have we learned from all this? In the 1960s, the Vietnam war was greatly expanded to no end. And during the last two decades, once again our leaders did not tell the American people the truth about Afghanistan and priceless treasure was once again squandered. We can and must do better.

Roy Wehrle of Springfield was Economic Counsellor to the Ambassador in charge of Economic Policy in the first three years of the Vietnam War.

Russian bear is on the prowl 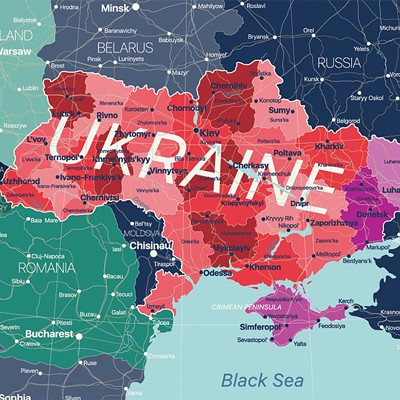