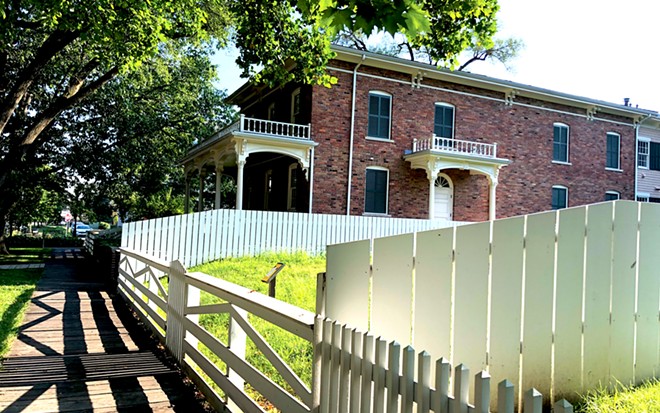 A reproduction of the Ninian Edwards home in which the Lincolns were married is now a conference center for the National Park Service.

The recent announcement that the Abraham Lincoln Association (ALA) wants to reconstruct the original one-story version of the Lincoln home needs a more thorough vetting than the publicity coming from the ALA. It's time to put some perspective to the need for another replica building to tell the Lincoln story.

Springfield already has the most authentic Lincoln sites – his home as well as his tomb and a modern museum. Another replica Lincoln site does not advance the story of Lincoln's life and represents community resources that would be better used in preserving authentic places, which Springfield does rather poorly. Despite the best of intentions, an "authentic reconstruction" is just another word for a fake with a veneer of respectability.

Springfield already has Lincoln sites with questionable authenticity. For example, The "Lincoln Depot" failed to meet the Lincoln authenticity test of the National Register of Historic Places during many years of community misrepresentation. The depot was added to the National Register of Historic Places in 2014, not as the Lincoln Depot, but as the Great Western Railroad Depot, significant for the railroad history of Springfield.

The premise of this idea is faulty.
The ALA has stated that the reason behind recreating the first version of the Lincoln home is that current visitors to the house get the impression that Lincoln was a successful lawyer with a very nice house. Somehow or other, they have turned this to be a negative that his success prevents people from knowing that he started from more humble origins. This logic is faulty. The American public has grown up with the story that Lincoln was born in a log cabin. The New Salem historic site more than adequately tells this story. The NPS already has a display with models of the Lincoln home showing its evolution. This was a wonderful method of telling the story of Lincoln's success as a lawyer and the home improvements that came with this success.

Build it and they won't come.
There is a huge crisis facing America's house museums. The public interest in this type of cultural attraction is waning and virtually none of them are self-supporting. The ALA has accurately calculated that a historic house museum won't pay for itself in admission charges and therefore needs a perpetual funding source for its long-term care.

The ALA has made a political plea for the property to be "given" to the National Park Service, and therefore the American taxpayers. They have falsely stated that the NPS desires an expanded campus, when they already have more properties than they need. The NPS does and should have high standards for acquisitions and already has enough fake Lincoln sites. The Lincoln birthplace site in Kentucky is already known to be a fake. The Lincoln home site already has a fake version of the home in which the Lincolns married.

The NPS professionals who are the stewards of our collective legacy should not be burdened with more replicas. It's demeaning to the professionalism of the NPS and a misuse of the political capital of Sen. Dick Durbin and U.S. Rep. Rodney Davis. The NPS also has no need for the Iles House, which was included in the potential "donation" to the them. This property is a piece of community history and is not essential to telling Lincoln's story.

There are other options.
If the Abraham Lincoln Association wants to do something new to better explain Lincoln's life through the places that represent him, there are better ways to do this than recreating the early version of the Lincoln home. The use of virtual recreations through modern architectural rendering tools and information software could put the ALA at the forefront of virtual historic interpretation. There are many examples of this for ancient sites, but this option has not been used nearly as well in America. If this group is still considering a physical recreation, they need to build and maintain it themselves, and not "give" it to the NPS.

Recreations do have the advantage that they can be used for modern activities that are not appropriate for authentic historic sites. An Abraham Lincoln Airbnb where a modern visitor could stay in a "Lincoln Home" might be a new model for a replica historic house that could actually pay for itself. Building it knowing that enough people won't support it is the first mistake. Making this a "gift" to the National Park Service only compounds the error.

Mike Jackson is a preservation architect in Springfield who served as the chief architect for the Illinois Historic Preservation Agency for more than 30 years. He is active in the house museum community and chairs a task force on house museums and building codes.