Why I weep when I hear "Danny Boy" 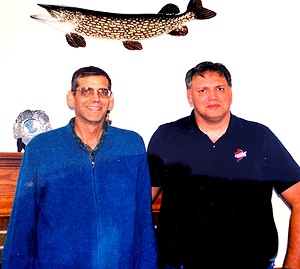 PHOTO COURTESY OF SCOTT REEDER
The author (right) with his brother, Danny, in 2005.
I glanced at the calendar and the date Feb. 26 stared back at me. It was my brother Danny's birthday.

But there is no Social Security check coming in the mail. His life came to an end too soon.

I'd almost forgotten the significance of the day. Earlier in the week, I chatted with a friend who had donated a kidney to a stranger. I mentioned I had a brother who benefited from a liver transplant.

But even that conversation wasn't enough to jog my memory. The mind doesn't like being reminded of tragedy. Losing a sibling at age 48 ranks right up there among life's losses.

Eighteen years ago, I found myself in the perverse situation of hoping someone would die so that my brother would live.

For months, Danny had teetered atop the Mayo Clinic's transplant list waiting for a liver.

For years he suffered from a rare liver disease – primary sclerosing cholangitis. His liver was giving out. Death was near, unless a transplant liver was found.

While there are some excellent living donor programs, my brother's transplant surgeon determined he was not a good candidate to receive a portion of a liver from a living donor. So, I found myself in the perverse situation of hoping someone would die so that my brother would live.

His prospects grew dimmer as he waited. Each day, 20 Americans die waiting to have an organ transplant. The waiting list for folks seeking transplants exceeds 100,000. Not enough people have signed up to be organ donors.

For my brother, his situation was more dire than most. Not only did physicians need to find a good genetic match but also someone who had never had mononucleosis.

Danny had never had mono. Our mother, a registered nurse, drilled into us the importance of good hygiene. We never shared cups, lollipops or dishes with friends. And mono, a common infection, never came our way.

But this careful attention to cleanliness became a detriment. If Danny received an organ from someone who had been infected anytime in their life, he could have life-threatening complications.

So, the potential donor pool was small. And all we could do was wait and pray.

I was at an investigative reporting conference in Atlanta when I received the early morning call.

It was my mother, and she was crying. Mom didn't weep easily. But that day her tears were happy ones.

A donor liver had come through.

On Father's Day 2004, he began his path to recovery. With the gift of a new liver his yellowing skin returned to a healthy peach color. His weakened body regained energy.

But this isn't an "and they lived happily ever after" story. I wish it were. Cancer began to grow in his transplanted liver and by December 2005, he was dead.

My brother, a man who lived 48 years without tasting alcohol, died of liver failure. It's not fair. It's not right. It just is.

At age 57, I still see my big brother's influence. He's the reason I studied at Iowa State, why I love John Prine music and why I shoot free throws in the same stiff, awkward manner he taught me.

I see his legacy in his adult son and daughter. Still, I wonder what might have been.

I can't help but ask, was it worth it? He only lived a year-and-a-half after his transplant. Well, when you don't know if your next breath will be your last, 18 more months is a blessing.

It gave Danny time to reconcile wounded relationships, love and look eternity squarely in its face.

Some woman, whose name we will never know, gave him a year-and-a-half that he never would have had.

My brother was not a man prone to much introspection. He was a farmer. Most things were black and white: crop yields, commodity prices, hog weights. Idle intellectual reflection was not something for which he was known. But when it came to the unknown woman who gave a part of herself to him, he became quiet and contemplative.

"I wonder what she was like. Did she have kids?" he said shortly before he died.

I wonder if her family misses her as much as I miss him.

We do know this much about the woman: She cared enough to give.