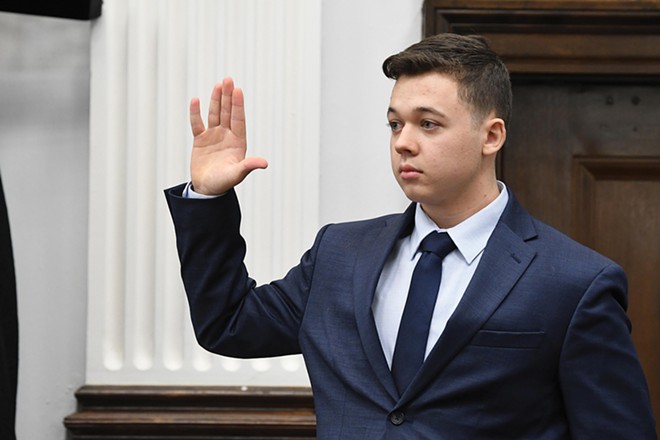 Photo by Mark Hertzberg/Pool/Getty Images/TNS
Kyle Rittenhouse is sworn in to testify during his trial at the Kenosha County Courthouse on Nov. 10, 2021, in Kenosha, Wisconsin.

The Kyle Rittenhouse trial and verdict is a bit like those ink blot tests psychologists sometimes have patients examine. A half-dozen folks can look at the same thing and see something different.

I've heard Rittenhouse described as a "hero" by right-wingers and as a "criminal" by those on the left. But when I look at him, I see a wannabe.

Thirty-some years ago, when I was a reporter at the Quad-Cities Times, there was a teenager who bought an old police car at an auction, painted it white, put a CB radio on the console and trolled around town like he was a cop. The high school kid's antics got eyerolls from the real police officers.

And I'd get calls while working the newsroom's night desk that a "plainclothes policeman" was seen someplace. Inevitably, it would be the kid playing dress-up.

He never really said he was a cop, but when folks would see his four-door sedan with its whip antenna they would hit their brakes and watch their speedometers.

Watching Rittenhouse testify, I couldn't help but think of that mystery teenager from more than 30 years ago. Today he'd be well into middle age. I never found out if he moved from being a wannabe to being a get-to-be.

Did he move from a life of pretend to a career of service?

I wonder about Rittenhouse, too. My hope is that he will move beyond this new-found notoriety and settle down and live a productive life. Killing two men and wounding another is not something to be proud of.

Can anyone say beyond all reasonable doubt that he wasn't in fear of his life when confronted by sometimes-violent protestors? I can't. And that is the burden of proof those 12 jurors had to unanimously reach if they were to convict him.

But what I can say with certainty is that a 17-year-old shouldn't have been there in the first place. If a teenage civilian feels the need to carry a rifle for self-protection when leaving home, it's time to rethink his destination.

That lesson was taught to me by my parents. Growing up on a farm, we found that occasionally thieves would take advantage of the remoteness of our location and that of our neighbors and steal gasoline or tools late at night.

A farmer we knew pointed a rifle at someone stealing his tools and held him at bay until a deputy sheriff arrived. The next day, the sheriff was praising the farmer on the front page of the Galesburg Register Mail.

I wanted to be a hero, too. So, in my teenage enthusiasm, I told my parents if I saw a thief, I would take my .22 rifle and confront him.

My folks set me straight.

There is no tank of gas or power drill so valuable to warrant the taking of a human life. If I saw a theft in progress, they said to make sure I was safe in the house and to call the sheriff.

That is the difference between the reasoning of a teenage boy and an adult.

I wish someone had sat Kyle Rittenhouse down and told him the same thing. A used car lot in Kenosha isn't so valuable that it warrants the taking of a life.

Comedian and social commentator Trevor Noah said, "Nobody drives into a city with guns because they love someone else's business that much."

Rittenhouse is a working-class kid who worked after school as a fry cook and a janitor. Some members of Congress have recommended him for a Congressional Gold Medal. Another congressman said he might offer Kyle an internship.

Killing two people and wounding another, perhaps in self-defense, doesn't merit an award. If he was truly in fear of his life, his reward is still being alive. My hope is that Rittenhouse doesn't cash in on his new-found fame, but instead pursues an education and picks a career of service.

That way, he'll no longer be a wannabe but a get-to-be.

Scott Reeder, a staff writer at Illinois Times, can be reached at sreeder@illinoistimes.com.