When Lincoln’s friend was killed just as war began 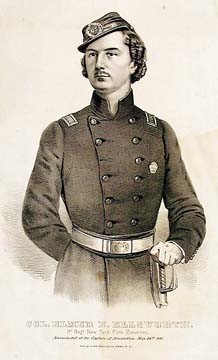 The Civil War was only five weeks old when Col. Elmer Ellsworth, 24, was killed tearing down a Confederate flag in Virginia. As the first prominent Union casualty, he became an instant hero: newspapers around the country mourned his martyrdom and composers penned songs in his honor.

His death hit Springfield and Abraham Lincoln particularly hard because he was a good friend of both.

Before a war was certain, Ellsworth began training volunteers for battle in the style of French Zouaves, known for their flashy costumes and precision drilling. His Chicago regiment became nationally known.

Before the war, Gen. John Cook, who headed the Springfield Zouaves, also called the "Springfield Greys," invited Ellsworth to Springfield to train the group, according to Ellsworth's papers from the Abraham Lincoln Presidential Library. The men drilled in Elijah Iles' pasture, located on the east side of Sixth Street south of Cass Street. Allegedly, Lincoln used to watch them there.

Cook was quite impressed with Ellsworth and encouraged the aspiring lawyer to study with Lincoln, who must have been impressed with him, too. In a March 7, 1860, letter Cook wrote to Ellsworth, he said: “You ask…if I have since your departure seen our friend Mr. Lincoln. I answer oft repeatedly and never without our conversation turning upon you. He is very anxious that you should not give the determination to make this place your home and his office your headquarters…. He has taken in you an interest I have never known him take in anyone.”

Ellsworth moved to Springfield temporarily and accepted Lincoln’s offer. The Illinois State Journal (Sept. 11, 1860) noted the occasion: “We are pleased to learn that Col. Ellsworth, late commander of the celebrated Chicago Zouaves, has reached this city for the purpose of making it his future residence…. He is now completing his studies at the law office of Lincoln & Herndon.”

Lincoln was a presidential candidate at that time and Ellsworth made local campaign speeches for him. When the Lincolns moved to the White House, Ellsworth accompanied them, according to the May 28, 1861, Illinois State Journal. In a March 1861 letter to his fiancee from Washington (in the ALPL collection), a sick Ellsworth wrote that he had gotten measles from the Lincoln boys.

After war broke out, Ellsworth raised a volunteer Zouave regiment from New York’s firemen, who went to Washington to help protect the Capitol and slept in the House of Representatives, according to Ruth Painter Randall‘s 1960 book, Colonel Elmer Ellsworth. There, the wily bunch impersonated lawmakers and passed mock legislation disbanding the House of Representatives.

But the men had to get serious not long after, when Virginia seceded. The regiment was sent to guard Alexandria, Va., which was within sight of Washington. There, Ellsworth spied a Confederate flag atop the house of a “well-known secessionist,” said the May 28, 1861, Illinois State Register. He tore it down and was immediately killed by the homeowner. News flashed around the north that Ellsworth was dead.

The May 29, 1861, Journal reprinted a New York reporter’s account of Lincoln’s reaction to the news. “The President burst into tears and concealed his face in his handkerchief…. [Lincoln said,] ‘I knew poor Ellsworth well, and held him in great regard.’ ” Later that day, Lincoln and his wife went to the Navy Yard to view Ellsworth’s body. The president had it moved to the White House where it laid in state until a funeral was held the next day. According to The Lincoln Log (thelincolnlog.org), Mary Lincoln laid a wreath on the colonel’s casket.

That same day Lincoln wrote Ellsworth’s parents (a copy of the letter is in the ALPL collection): “In the untimely loss of your noble son, our affliction here is scarcely less than your own…. My acquaintance with him began less than two years ago; yet through the latter half of the intervening period, it was as intimate as the disparity of our ages, and my engrossing engagements, would permit….”

Flags at Springfield were lowered to half mast and memorials to Ellsworth were printed in both the Democrat and Republican newspapers.

While Ellsworth was hailed as a hero, some said his removal of the Confederate flag was rash.

An Aug. 10, 1912, recollection of Ellsworth (from the ALPL), written by one of his former regiment members, countered that claim. Edward P. Bartlett wrote: “The Confederate Flag could be seen floating from the balcony of the White House in Washington, and it is said that at one time the President had pointed it out to Ellsworth and remarked that it was insulting. When the troops of Col. Ellsworth marched into the city of Alexandria, and they came in sight of the flag, his only thought may have been to secure the same and send it to the President with his compliments.”