And the governor picks his opponent

Democracy may not be dead in Illinois, but it's circling the drain. 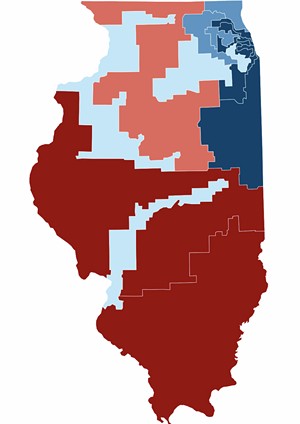 It's the dirty little secret of the Illinois General Assembly; most members aren't so much elected as anointed.

The majority party in the General Assembly has gerrymandered legislative districts in a manner designed to ensure its continued control. That's part of the reason why the Democratic Party has a supermajority status in both the state House and Senate.

Now, before you think I'm unfairly maligning Democrats, I'd note that Republicans are engaging in the same type of behavior in places like Texas and Florida. And I don't doubt that if they were in charge here, their behavior would be the same.

In a democracy, power is supposed to rest with the people. But entrenched political interests have spent decades stripping voters of choices.

Politicians distort and stretch their districts into strange shapes for two reasons: To get more seats for their political party and to get reelected without having to run a substantial campaign. Potential candidates don't run because they look at how a district has been drawn and know they can't possibly win. Instead of voters picking legislators, we have legislators picking voters.

So just how bad is it in Illinois?

At my request, Ballotpedia analyzed 2022 Illinois election filing data and found that in 58% of Illinois legislative districts the candidate is running unopposed.

Yes, you read that right. Most Illinois voters have only one legislative candidate to "choose" from. And in the remaining 42% of districts, the opposition is expected to be nominal in most cases.

But aren't most other states just as bad? Not really.

In Colorado, 94 percent of all legislative candidates will face opposition in the general election. And Oregon and Maine voters will have choices in 87 percent of legislative races. Illinois ranks in the bottom one-fifth of states for competitiveness.

In 2016, the Illinois Supreme Court, in a party-line vote, shut the door on a constitutional amendment being placed on the ballot by voters that would create independent redistricting in Illinois. This leaves a legislative vote as the only avenue to place such a measure on the ballot.

Madeline Doubek, executive director of Change Illinois, said it would be difficult to get such a vote to pass because lawmakers would be making their own jobs more vulnerable.

Redistricting doesn't affect candidates running for governor because governor is a statewide office, but something even more insidious happened this year. Gov. JB Pritzker picked his opponent.

As NBC News reported, the Pritzker campaign spent $32 million on TV ads in a primary in which he was unopposed. And the Democratic Governor's Association spent $18.4 million more.

The money was spent to ensure that Aurora Mayor Richard Irvin was not the Republican nominee and to help downstate State Sen. Darren Bailey capture the GOP gubernatorial bid.

"As nefarious as it is, it's effective politics to interfere in the other party's primary – especially if you are a candidate who has more money than God," said GOP consultant Patrick Pfingsten, who publishes the Illinoize political newsletter.

Scott Reeder, staff writer for Illinois Times, can be reached at sreeder@illinoistimes.com.