We have a city plan. Now what? 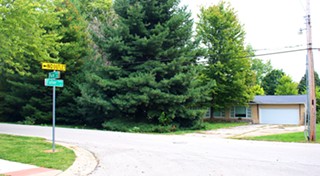 PHOTO BY STACIE LEWIS
A developer received approval for a zoning change to allow construction of 24 two-bedroom apartments at 3526 S. Park St., although nearby residents expressed concern about increased traffic and inadequate infrastructure. The property is within Springfield city limits, but the street is maintained by Woodside Township.

The biggest hurdle in Springfield's urban planning process is the actual implementation of our comprehensive plan. The most recent one, Springfield's 2037 Comprehensive Plan, references transit and also calls for individual neighborhood plans to be developed. It was approved by the city council, but other levels of government have to go along with it, voluntarily, to make it a reality. For example, transit is not provided by city government, but instead by the Sangamon Mass Transit District (SMTD), whose board is appointed by county government.

Our planning process is like herding cats. It requires getting various units of government on the same page, to play nice with one another and to do so with little conflict.

That's a lot of work.

On the August agenda for the Springfield Planning and Zoning Commission (of which I am a commissioner), we had a request to change the zoning of one lot from R-1 (single family) to R-3 (multi-family) to allow for a new apartment complex. The location was on a narrow street that is maintained by Woodside Township, but the lot itself was in the city limits. There are no sidewalks in the area, lighting is limited and transit service is at least a half-mile north on Wabash Avenue. Because it's not a city street, it would be unlikely to receive any upgrades. Yet, there we were, being asked to intensify the land use and allow some 50-60 residents to live in an area that was previously occupied by one family. This is an example of multiple units of government not coordinating well with each other, and landowners and residents being left to hold the bag.

The landowner was potentially being denied use of their property for a good economic return and the community was potentially being denied more affordable rental housing, yet the nearby residents would be faced with increased traffic and inadequate infrastructure if we approved it. There was no right answer. The commission ultimately approved the petition, and the full city council approved the zoning change 8-2 at the Sept. 21 meeting.

Zoning is handled entirely within city government, but land subdivisions go through the regional planning commission. When a lot is subdivided, we tend to get slightly better planning results, as a more comprehensive view is taken. When we change zoning, the Springfield-Sangamon County Regional Planning Commission (SSCRPC) staff make recommendations that may or may not be followed by city hall.

If our zoning process were different, perhaps Woodside Township representatives would be in the room and be made aware of the increase of traffic on its streets. Perhaps more coordination could occur and outcomes would be improved for everyone involved.

Ostensibly, SSCRPC exists to help smooth some of these wrinkles, and generally it does a fantastic job. But sometimes it is unable to do its work unimpeded because of a power struggle. The Democratic-leaning city government feels like it is giving yet another bit of its power to the Republican-leaning county government, despite the SSCRPC being independent of county government. As a result, city hall tends to wield power within its boundaries without fully considering the regional planning consequences of its actions.

The planning process is choppy because of this power dynamic. Some council members have called for the city to hire a city planner. However, we have a staff of professional planners at the Springfield-Sangamon County Regional Planning Commission. Another city planner on the payroll is going to say: Follow the plans that already exist. Listen to professional staff. Spend more than five minutes on the petition during the zoning portion of the city council meeting.

What we really need is to listen to the professional staff we already pay to guide us, give that staff more authority in areas of zoning and planning and review our ordinances to make sure they are in line with our goals in the comprehensive plan and in line with best practices for the 21st century.

This is a call for us to review how we plan and coordinate our land use, zoning and infrastructure. Right now, it is a choppy, cumbersome process that does not provide the kind of results people in Springfield are seeking. If we want better outcomes, including the ability to attract new employers, we have to focus on a truly comprehensive plan and an implementation process.

Steven Simpson-Black is a Springfield resident and the newest member of the Springfield Planning and Zoning Commission. He is pursuing a degree in urban planning at University of Illinois Springfield.