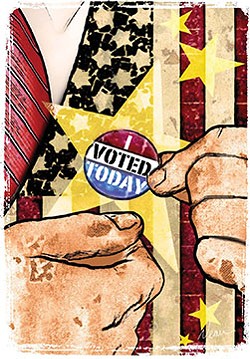 ILLUSTRATION BY Rick Nease/TNS
ILLUSTRATION BY Rick Nease/TNS
As a nation we are split into two camps along familiar populist/progressive lines, with one believing that government doesn’t work because the people running our governments don’t understand the voters and the other believing that government doesn’t work because voters don’t understand government. Members of the General Assembly in the latter camp joined to approve and send to the governor a bill that would require students in Lincoln’s land to pass a one-semester course on civics in order to graduate. The aim, says the bill, is to create “competent and responsible” citizens.

That’s expecting a lot of a high school class. That’s expecting even more of citizens. Thirty-five percent of Americans can’t name a single branch of our government, according to a 2014 survey by the Annenberg Public Policy Center. Ask Americans the state of crime rates, immigration, the economy, almost anything and a majority will describe a country that does not exist. Nor do they know which governments do what or what any of them spend on anything, and in their ignorance imagine that governments spend more than they actually do on things they don’t like, like foreign aid, and less on what they do like, such as mortgage interest deductions.

Illinoisans are denied the vote while in prison for committing a felony against the public weal. Casting an uninformed vote is a crime against the public weal too, yet responsible people call for more of it. A few weeks back, Barack Obama suggested that voting be made mandatory in the U.S. More recently Mrs. Clinton, his heir presumptive, called for universal, automatic voter registration. I don’t believe that the ignorant and the indifferent should be forced to vote, nor am I certain that the ignorant and the indifferent should be allowed to vote.

We require immigrants to know something about how U.S. government works before we make them citizens on the assumption that they won’t have learned how our system works; why not demand the same of natives who are just as uninformed? A high school course might help, but I would prefer that voters be required to pass a test on government structure, powers and finance. I don’t mean the arcana about the length of a dogcatcher’s term but the real stuff  – who decides what at each level, how the tax system works, what’s in the state and federal constitutions and budgeting. The state of Illinois makes nail technicians take a test to prove their competence. Ditto condo managers, auctioneers, hair braiders and interior decorators. Not voters.

I am aware that the expectation of knowledge is regarded as a form of bigotry in this country. I also concede that my problem with voters is my problem with democracy. The Founders, remember, made their new nation a republic rather than a democracy because they believed (to quote the authors of the book Democracy and Its Discontents) that “important social and political decisions cannot be left to the uneducated, manipulable masses, who could not be trusted to make decisions for the social good let alone for their own good.”

Yes, I know – dead white males are always saying things like that. But uninformed voters fall much further short of being competent and responsible citizens than their elected representatives fall as competent and responsible officials. (In fact, being competent and responsible is probably the surest way I know for an official to lose an election.) Polls consistently support the claim that people associate good looks and tallness with competence, they value likeability over experience and while they don’t mind a candidate being educated they dislike her for speaking like it. An election-changing minority of what H.L. Mencken called the American booboisie will punish incumbents for anything that happens when he is in office, from gasoline prices to their divorce. Hell, they punish an incumbent for some things that happened when he wasn’t in office; my favorite Stupid Voter Trick was revealed by the 2013 Public Policy Polling survey of Louisiana Republicans, a third of whom blamed Barack Obama for the feds’ poor response to Hurricane Katrina, even though that storm occurred three years before he took office.

If we are to change majority government, we have to change the majority. That, ultimately, is the hope – and has always been the hope – behind progressive nostrums like mandatory civics classes. But most people don’t want to be relieved of their ignorance. They like it; it’s familiar and it’s comforting. (Illinoisans recently elected one of their own as governor, a man whose boast that he knew knowing nothing about government they saw as a qualification.) “Positions” on issues, it is becoming clear, are merely after-the-fact rationalizations to justify votes decided on more sordid instincts such as racism, class resentment, social anxiety or religious chauvinism. Most voters, I’m convinced, already know as much about government and public affairs as they want to. And hey, it’s their government.