Volunteering doesn’t pay...or does it?

PHOTO BY PATRICK YEAGLE
Some of the 280 volunteers gathered outside the United Way of Central Illinois headquarters at 1999 Wabash Ave. on Oct. 5 for a Day of Service.

On a blustery Friday, an endless stream of people ambles into the United Way office, filling the small space with white T-shirts bearing the words “Live United.” Moments later, they’re filing back through the door and fanning out across Springfield to tackle a variety of tasks.

It’s a record-breaking “Day of Action” for the United Way of Central Illinois, with 280 volunteers heading to 17 sites across the city. This marks the third year for the twice-yearly program, which harnesses volunteers from more than 20 different companies and schools. Workers spent the afternoon of Oct. 5 painting, cleaning, moving boxes and winterizing buildings, among other jobs.

“What’s unique is to see the power of volunteers all at one time,” he said. “This community is blessed by strong volunteers throughout the year, but for us to mobilize resources all at one time is exciting. It actually lets our agencies plan for projects they could do with 12 volunteers or 20 volunteers.”

Some of the groups that benefited are associated with United Way, but many were not, Kelker says, adding that coordinators tried to match volunteers with jobs that match their skill sets. Kelker says the nonprofit coalition Independent Sector released a nationwide study that valued volunteer labor at $22.77 per hour, putting the total monetary value of volunteer work done during the Day of Action at more than $27,000.

At Mini O’Beirne Crisis Nursery, 1011 N. Seventh St., a group of volunteers from American General Life Insurance sorted through several bins of clothing, pulling out children’s summer clothes and replacing them with winter clothes. The nursery provides emergency care for children from families experiencing a crisis. American General and several other companies gave their employees paid time off from work to participate. 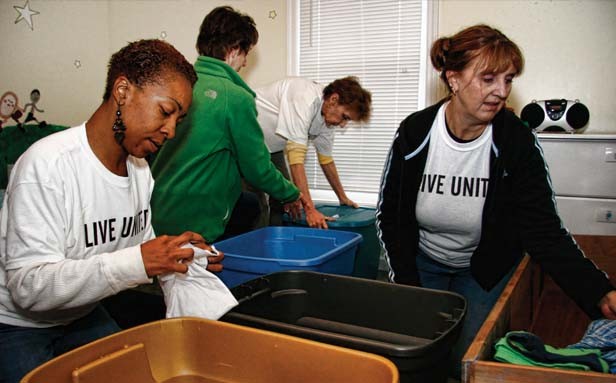 “We’re a very small staff with a very small budget, so volunteers are like the lifeline for us,” Cox said. “Without them, we wouldn’t be able to help as many families and kids. This Day of Caring program is great for us because it not only helps us get some projects done that we’ve had to put on the back burner, but it also gives us a chance to let other people see what we do.”

Volunteer Cindy Crompton said she feels it’s important to give back through volunteering.

“It’s nice to get out and work with the community and see things like this going on, knowing that families have a place to go,” she said. “It’s good to get together with co-workers, and it makes you feel good doing something good for the community.”

Kelker says that despite an uncertain economic forecast, volunteerism in Springfield and across the nation is stable. A study from the Corporation for National and Community Service, a federal agency that runs several volunteer programs, shows more than a quarter of the U.S. population volunteers in some way. Illinois showed higher than average volunteer rates for most of the past 10 years, the study shows.

“It may be that some people feel that they’re in a better position to give of their time than their resources,” Kelker said, attempting to explain the constant flow of volunteers. He says volunteering is important because the economy has driven more people to need nonprofit social services, which stretches agencies’ resources “as thin as possible.”

“We’re putting a smile on peoples’ faces,” he says. “I know that sounds silly, but more times than not, individuals and families go to agencies when they’re in trouble and need help. If we can make that environment a little more welcoming and friendly, it’s got to help.”