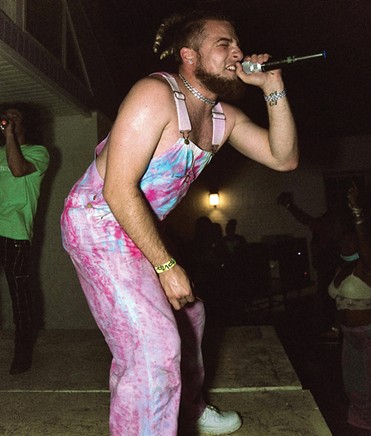 A true sign the hip hop, rap and pop movement in central Illinois is not only alive and well, but finally getting the attention it deserves, Kid Ziggy (otherwise known as Zachary T. Geller) claimed honors as our best male vocalist this year. Now approaching 6,000 monthly listeners on Spotify for several singles and plays from his album "Brainstorming," he also has nearly 5,500 views posted on his latest YouTube video and single, "Bad Influence" (filmed by Visual Paradise), and over 1,300 followers on his Facebook musician page.

In online numbers – and that's what counts these days – Kid is killing it while carving a path into the world of music-making. Not only does he write and perform original material, he posts regularly on social media sites such as Facebook and TikTok, singing songs by popular artists such as Ed Sheeran, Bruno Mars and Sam Smith, clearly showing he has the pipes to do whatever he chooses when it comes to laying down the tunes. He's also collaborated with Papa Luke, RJC, Danny J and THEDAMNCLAMMAN in an independent record label based in Springfield called ZiPPiR Collective, who as a group have released two EPs, produced several live shows and developed into a driving force in the music community.

Born and raised in Taylorville, Kid Ziggy makes no bones about wanting to get to the top of the music industry heap and keeps up every day with the work necessary to achieve such a goal. Besides producing and posting songs on his media sites and generally doing what it takes to make some noise on the internet to gain recognition beyond our community, he also performs live at local venues, taking it to the streets for the folks around here.

He's got the drive, the look, the music, and according to our readers and thousands of social media followers, the voice to carry on to be the best. And you better know that when Kid Ziggy gets going, he's going to get real gone.