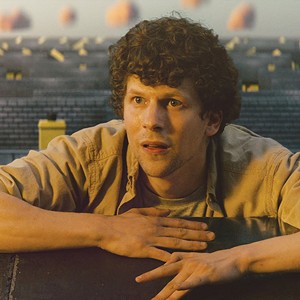 Tom and Gemma weren't really looking to buy a house. They went into the real estate office on a lark, a vague plan of the future in their heads, looking at the models of the perfect, cookie cutter homes on display with bemusement. Embarrassed to say "no" to the awkward, overbearing real estate agent that greeted them, they reluctantly agreed to follow him to the newly built subdivision, Yonder. The house and all it contained was fine; that each home on the block looked exactly the same didn't give them pause. However, when their guide disappeared and the couple found that their attempts to drive out of Yonder were futile, that all roads led back to their new "home," well, it was too late.

If you're a fan of Rod Serling's classic anthology series The Twilight Zone, Lorcan Finnegan's Vivarium will likely be right up your alley. Challenging yet intriguing throughout, the film casts a wide thematic net, touching on a variety of societal concerns as well as interpersonal issues. Anyone who's felt a bit hemmed in at times by the notion of a committed relationship or worried about their place in the grand scheme of things will find their fears addressed in this slow-burn look at the traps we unwittingly set for ourselves.

That Tom and Gemma are unable to find a way out of the labyrinthine community they're trapped in is the least of their worries. Soon after they arrive, a cardboard box containing an infant is left on their doorstep. They're instructed to raise the child; then they will be granted their release. Fortunately, the boy grows at a fantastic rate, yet he's a nightmare – constantly demanding attention, throwing Tom and Gemma's words back in their faces by perfectly mimicking their voices and giving them absolutely no privacy. The strain wears on the couple and they ultimately embrace their own devices to cope – he, digging a hole in the front yard in the hope of escape, while she tries to bond with their "son."

The Rene Magritte-inspired set design is purposely artificial and while the premise is an obvious construct, the emotional issues put under the microscope are wholly relatable, if a bit scattershot. Is this a cautionary tale about the loss of identity that occurs when becoming a parent? A modern take on Descartes' No Exit, perhaps? A warning about the dangers of suburban assimilation and rampant consumerism? How about a timely look at the pitfalls of isolation? Finnegan is ambiguous about it all but it would be safe to say that he tips his hat in the direction of all of these themes at one point of another, not drawing any definite conclusions, but allowing us to come to our own. Much like a Rorschach test, Vivarium is a purposely vague nightmare, one we bring our own baggage to and draw our own conclusions, making for an unexpectedly personal experience.

As Tom and Gemma, Jesse Eisenberg and Imogen Poots prove to be very likable and sympathetic throughout. Perhaps the most refreshing thing about the film is that as things become more stressful, these two never turn on each other. They remain supportive and understanding of the pain each is suffering even if they don't condone how the other is dealing with the situation. And in the end, I think that's what Finnegan is trying to say – the world can go to hell in a myriad of ways but having empathy for each other is the only way to cope. In that regard, Vivarium's message couldn't be more timely.