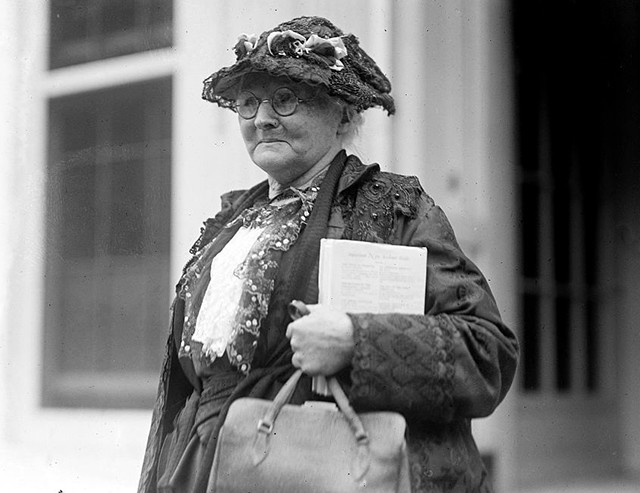 It is not a new story, this struggle between laborers and owners/management. Mary Harris Jones, better known as Mother Jones, dedicated her life to better conditions for miners and an array of laborers. You can find out about her amazing legacy right here in central Illinois.

The first stop for my friend Janna Seiz and me when we set out on our Mother Jones mission was the Coalfield rest stop near Raymond. We stopped at the rest stop on the southbound lane to see the new historical marker and exhibit inside the stop. This was installed in part due to the efforts of Northern Illinois University Professor Rosemary Feurer, who has been working to share Mother Jones legacy. The marker and exhibit were unveiled on Dec. 11, 2017. Feurer is the director of the Mother Jones Museum and Heritage Project, which sponsored the marker.

Our next stop was the Miner Cemetery in Mt. Olive. This is the only cemetery in the state owned by a union.

According to the Mother Jones Museum Foundation, “The cemetery was established in 1899, when commemorations of the miners killed in the 1898 Virden riot became controversial in the established Virden cemetery. In the Virden riot of October 1898, four security guards and seven miners were killed during the United Mine Workers of America strike. The bodies of the Virden “martyrs” were moved from the Virden cemetery and reinterred in a cemetery established as the Union Miners Cemetery by the Mt. Olive United Mine Workers local.

On the square in Virden there is a beautiful marker dedicated to those who lost their lives and this bloody history that took place so near my home.

The Miner Cemetery is interesting, and the monument is quite touching. Mother Jones said she wanted to be buried in Mt. Olive. After she died, in 1930 at the age of 100, she was buried there. During the Depression, miners started a fundraiser for the beautiful 80-ton Minnesota pink granite monument, 22 feet high, that is flanked by two bronze statues of miners. There is also a small covered pavilion with a bench. On the brick wall are quotes from Mother Jones. My favorite: “I’m no angel. Get it straight. I’m not a humanitarian. I’m a hell raiser.”

Our last stop on the Mother Jones Trail was the Mother Jones Museum which is housed at the Village of Mt. Olive building. One room is dedicated to the small museum, but the largest treasure we found was the documentary Mother Jones: America’s Most Dangerous Woman. The documentary and the museum helped Janna and I better understand who Mother Jones was and how she came to be so fierce in her mission.

Her story is one of an immigrant who came to North America for a better life. Born in County Cork, Ireland, in 1830, the Harris family made its way to Toronto Canada and settled in. She became a teacher and a dressmaker and made her way to the U.S. In Memphis, she met and married her husband, George Jones, a foundry worker and a member of the International Iron Molders Union. In 1867 she lost her husband and her four children to a yellow fever epidemic. The 30-year-old widow headed to Chicago and opened a dress making shop that burned down in the great fire of 1871.

As the years went by Mary Harris Jones reinvented herself as Mother Jones. She took on a persona that moved men, women and children alike to strike for better wages and conditions. She represented miners, steel workers, bottle washers and everyone, everywhere. Living on a stipend from the miners union for the rest of her life, she traveled wherever she felt the need and stated, “My address is like my shoes. It travels with me wherever I go.”

Mother Jones was a fascinating woman who suffered loss and turned her anger into a determination to change the world as she knew it for the better. She didn’t fear guns, police, authority or, from what we saw, basically anything. She told those she was fighting for that the power was in their hands. For more information about the Mother Jones stops we enjoyed, log onto the http://www.motherjonesmuseum.org.

Cindy Ladage, author of children’s books, lives on a farm near Virden.