Visions of an anti-racist education

Educator and professional trainer on how to go about change 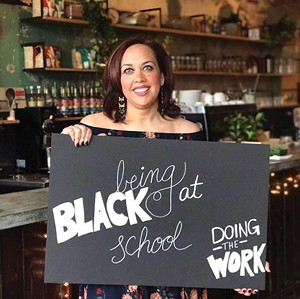 The sentiment that schools do a poor job of telling the true history of racial oppression is not new, but calls for change have been amplified in recent weeks. This comes as demonstrators across the country call for widespread reforms in the wake of more police killings of Black people.

Petitioners have asked school districts across the country to rethink how Black lives are taught about it, and have demanded changes that would challenge the traditional framing of the nation's history. At a recent Juneteenth rally in Springfield, Brandis Broomfield, an elder of Kingdom Authority Ministries International, prayed for education reforms that would "remove oppressive power structures, coded languages, microaggressions and the institutionalization of racism from the lexicon of the American educational system."

But just what would an anti-racist and inclusive curriculum look like? That question has long been on the mind of Springfield's Kelly Wickham Hurst, who worked in public and private schools for more than two decades. Hurst said as a light-skinned Black woman, she's cognizant of her privilege. While working for schools, she felt tokenized, and as though it was expected for her to go along with the "dominant white culture." She said school administrations expect Black employees to "uphold the status quo, when it's hurting people who look like us and who look like our families." So, she left.

Now, she's a consultant and head of Being Black at School, a nonprofit organization that works with families and officials to make schools more equitable. She's also a member of the Springfield Coalition on Dismantling Racism and a trainer for CrossRoads Antiracism Organizing and Training. Anti-racism is the practice of actively eliminating racism within organizational structures, institutions, systems and attitudes – and promoting inclusion and an equitable distribution of power.

According to Hurst, an anti-racist school curriculum would "embody anti-racist values, which are collaboration, cooperation, operating from a place of abundance, operating from a place of transparency – of stating exactly what we're doing and why we're doing it." It would go beyond just adding more Black history into textbooks where authors have long marginalized those stories, she said. "You have to have more people at the table making decisions. And they cannot come with a white-centric view."

"We could have a very robust conversation if we actually use the resources of people – the people who already live here, the people who have their own family stories, family history and family heroes and heroines, and people who have done incredible work in their lifetime that we may never hear about," said Hurst about utilizing lessons from within our own city. "An untapped resource is actually our very own community."

"Black history is American history, it just needs to be. I think that what needs to happen in these textbooks is to figure out how much of our textbooks are white and Eurocentric," said Hurst. Anti-racism asks for critical reflection on who is helped and who is harmed by certain protocols and narratives. A more accurate, fair and just telling of history, said Hurst, "would include everybody's history and it would not be dominated by white voices and it would not be dominated by the narratives of white heroes and heroines who, by the way, have themselves harmed and subjugated and murdered people of color, not just Black people."

"Anti-racism looks at the real picture. It looks at history from a lens of people of color who have been completely wiped out of history," said Hurst. She's heartened by what she's seen and heard in recent weeks. Just how close are we to creating a more inclusive and accurate telling of our history? "We're closer than we've ever been," she said. "This is definitely the closest I've seen us come." Effecting change takes a critical mass, she said. But even if just 15-20% of those in an institution are willing to speak up, Hurst said research shows, "That's all you need."