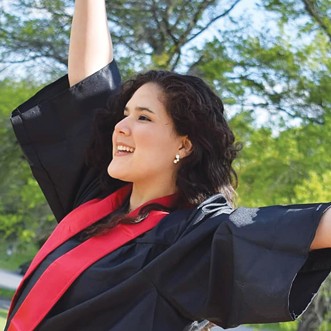 Photo by Mia
Sabrina Páez in her SHS cap and gown.

Sabrina Páez has a friendly smile, outgoing personality and is quick to engage in a lively conversation. Upon meeting her, it's hard to believe she just turned 17. Páez has been attending Springfield High School since September as a Rotary Youth Exchange Student from Maracaibo, Venezuela. She should be headed to Grand Rapids with 500 other Rotary exchange students. Instead, she is in Springfield with her host family, Barb and Lee Malany. Being unable to travel due to the pandemic is nonetheless a cultural experience in her mind. Páez has a happy disposition and looks at the good side of things. She has learned not to waste time on small things, to rethink how lucky she is to have her family and to appreciate the comforts she's been given.

Instead of returning to Venezuela, Páez will join her family in Toronto, Canada. Her parents have taken the risk of starting a new life and hoping for the best, due to fear of continuing to live in a nonstable country.

Páez attended an all-girls Catholic school from the age of two. Attending an American high school was a radical change. Language issues and not knowing anyone were major challenges. Also, students were more interested in talking to the exchange student from Italy than someone from Venezuela, as most students don't know where Venezuela is or anything about the country.

Páez's eyes light up when talking about the Venezuelan people. She is accustomed to being around a large circle of loving friends and family, where hugs are the norm. Now, she has a hard time remembering not to hug her new friends when she sees them while walking in the park.

Páez joined the Rotary Catatumbo Interact Club in Venezuela to participate in service projects. That led to a Rotarian telling her about Rotary Youth Exchange. It wasn't easy to apply. With no American Embassy in Venezuela, she had to travel to neighboring Colombia to obtain a visa.

When she left home, she didn't expect to celebrate her 17th birthday in the midst of a worldwide pandemic. Nor did she realize she wouldn't return to Venezuela. Conditions became more difficult after her departure, with massive blackouts, ongoing political unrest and no sense of security. Consequently, her parents left Venezuela in January. Her father is a public accountant, and her mother works in marketing. She regrets not being able to go back and see her friends, but there is no opportunity for her to live a normal life in Venezuela.

Páez is acutely aware of the issues facing her country – the wars between citizens and the military and the socioeconomic and political crises as a consequence of the dictatorships of Hugo Chávez followed by Nicolás Madura. Hyperinflation and escalating hunger, disease, crime and death rates are causing widespread emigration. The health care system is not equipped to manage a pandemic. Lack of electricity, insufferable heat and access to food are ongoing problems Páez has seen firsthand.

Páez is committed to doing her best to help others. In the meantime, she flourishes here in Springfield. She was thrilled to don a cap and gown for the virtual SHS graduation. To officially graduate from high school, she will need to take additional classes in Canada. Later she hopes to go to a university and study international relations.

Páez enjoys observing day-to-day life in the U.S. and describes her experience as "a life in a year." She's interested in everything from what people eat for breakfast to how Americans are responding to the coronavirus pandemic.

Páez has a passion for art, having taken classes since she was five. She enjoys painting and applied this talent to meet a goal while stuck inside. She needed $1,000 to buy an iPad for designers. She sold her paintings through Facebook to family and friends and met her fundraising goal.

"The pandemic has given me a lot to think about," says Páez. "Seeing that the world is gathered together trying to solve a common situation gives me a ray of hope that you are never alone. In Venezuela you feel that you are far away, that there is no one to listen to you or help. But, seeing this situation shows me that the international community never abandons itself."

Karen Ackerman Witter enjoys meeting youth exchange students, having experienced the life-changing impact of studying abroad as a Rotary Ambassadorial Scholar at the University of Wales in the late 1970s.