At long-term care facilities, staff often say no to the shot 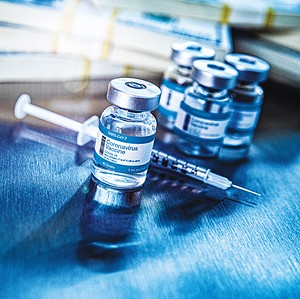 CVS and Walgreens are situated to provide up to 7 million vaccines to long-term care facilities combined, according to AARP. But the federal program pairing pharmacies with long-term care providers has failed to meet initial benchmarks. Meanwhile, large percentages of staff at many nursing homes are refusing the vaccine.

"With staff, we have seen a lot lower participation because they do have that fear of 'how is this going to affect me' and wonder if there are going to be effects down the road," said Shana Lister. Lister is the administrator of Regency Care in Springfield, a nursing home with 99 available beds according to online listings.

Others are simply "holding off to see how it plays out," said Lister. There was some unease among Regency Care nurses and staff who attended the first vaccination clinic, but those who got the initial shot decided it was worth it to keep residents safe, said the administrator.

Lister said the facility spent 10 months trying to prevent an outbreak and was lucky to evade the first wave of the virus. However, cases in nursing homes throughout Illinois spiked around the end of November and beginning of December. On Dec. 3, the first case of COVID-19 was reported at Regency Care in Springfield. By the end of the month, 20 staff and 37 residents had tested positive for the virus, said Lister. In the last weeks of 2020 vaccine schedules were drafted for long-term care facilities and nursing homes. This gave residents at Regency Care hope after seven of their neighbors had died due to COVID-19 complications.

Vaccines were made available to the facility on Jan. 12. In partnership with Green Tree Pharmacies, 80% of residents received the first immunization doses. But only 30% of Regency Care staff signed up for shots in the first clinic.

The Pharmacy Partnership is the federal vaccination program designed to put residents and long-term care providers at the forefront of immunization efforts. Local pharmacies are paired with long-term care and nursing facilities to administer inoculations on-site. On average, the state of Illinois receives 120,000 new vaccines every week and thousands are given to pharmacies enrolled in the program.

Last week, Gov. JB Pritzker criticized the federal partnership and CVS for lagging immunization efforts. In adherence with federal CDC recommendations, Walgreens began vaccinating residents earlier in December. But CVS representatives said the governor was at fault for the late 'activation' date, scheduled Jan. 25. More than 495,000 shots have been allocated to long-term care providers and residents statewide, but only 31.6% have been administered as of Feb. 2, according to the Illinois Department of Public Health.

Walgreens and CVS insist the slower rollout is attributed to low acceptance rates among long-term care and nursing staff. Lister said state officials "never really have done a great job of keeping us educated so that people can make informed decisions," but hopes more staff members will participate in a second vaccination clinic scheduled for Feb. 4.

State and local outreach programs have been designed and are near completion. AARP Illinois director, Bob Gallo, said the organization is putting immunization information in the hands of long-term care staff. AARP is sending flyers to smaller facilities, staff and residents because information online can be confusing and frustrating, he said. The goal is to help ease vaccine fears or anxieties by giving people something tangible to reference and read.

"It's an outreach effort on our part in trying to work as closely as we can with federal, state and local government to help get the word out and to clear up the confusion and chaos that's out there during this rollout," said Gallo.

While vaccine education and reassurance may cure some fears, staff bear witness to the uncoordinated vaccine efforts on local, state and federal levels. Alongside listening closely to the concerns of all Illinois residents, Gallo said state leaders in Illinois need to "manage people's expectations as well."