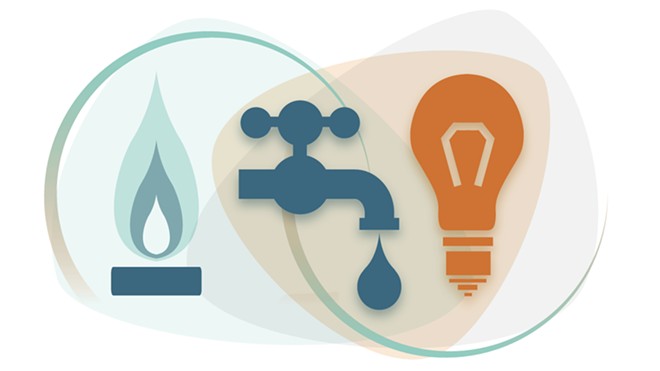 This bad news for consumers who already are dealing with record levels of inflation and higher prices for everything from groceries to gasoline is related to a variety of factors, including the Russian invasion of Ukraine, Ameren officials told Illinois Times.

Other factors include record-cold weather in the South in 2021 and the nation's lagging transition from fossil fuels to renewable energy, officials said.

And the higher prices for customers of Ameren – which serves Sangamon County and much of the rest of central and southern Illinois – may persist for several years, according to Jim Blessing, Ameren Illinois' vice president of regulatory policy and energy supply, and Ameren communications director Tucker Kennedy.

They point out that Ameren Illinois, a subsidiary of St. Louis-based Ameren Corp., a publicly traded company, doesn't make a profit on the higher bills. That's because the increases are directly tied to increases in the cost of energy – wholesale electricity and capacity procured by the state's Illinois Power Agency and natural gas that American Illinois buys. These costs are passed through directly to Ameren Illinois customers, dollar-for-dollar, they said.

Ameren in the late 2000s stopped producing its own electricity because of deregulation of investor-owned utilities mandated by the Illinois General Assembly. Ameren supported deregulation.

The typical Ameren Illinois electric customers will see a $626 annual increase in their power bills, or about $52 more per month, Ameren officials said.

Customers of Springfield's City Water, Light and Power electric utility will be mostly shielded from these capacity price increases that Ameren Illinois customers are feeling this year, according to Doug Brown, CWLP chief utility engineer.

That's because CWLP generates enough of its own electricity – mostly through the Dallman 4 unit – to cover "almost all of our capacity requirements" without having to depend on buying power off the electrical grid, Brown said.

"This is one way the Dallman Unit 4 is shielding our customers from higher market rates," Brown said.

Average CWLP bills related to the purchase of power capacity that the utility needs in addition to its own generation might increase bills about $2 per month this year, compared with increases for Ameren customers that are more than 20 times higher, he said.

Regional and global trends are fueling the hikes in natural gas and electric bills in many parts of the country, though the clean-energy bill passed by the Legislature this year – known as the Clean Energy Jobs Act – is providing credits on the electric bills of northern Illinois residents and insulating those customers from electric rate hikes for now.

State and federally funded energy assistance programs will blunt the increases for many low-income customers in downstate Illinois, but family budgets will be affected this summer and winter for many others, according to Dave Kolata, executive director of the Citizens Utility Board.

"That's going to make it extraordinarily tough for consumers to make ends meet," he said.

The war in Ukraine has led to Russia reducing natural gas exports to European countries that are opposing the Russian invasion. Those countries' demand for gas from the United States and elsewhere has driven up the price of gas and electricity worldwide, since natural gas-burning power plants contribute to the power supply.

American consumers are feeling the fallout from the Ukrainian situation, as well as the lingering impact of the disruption of Texas natural gas supplies related to winter storm Uri in February 2021. Customers have seen natural gas price increases of about 40% since that time, Blessing said.

The distribution network damaged by Uri has been repaired. But demand for natural gas has remained high, keeping the price high, in part because of the war in Ukraine and the U.S. economic recovery during the past year of the COVID-19 pandemic, Blessing said.

Another big factor influencing prices, he said, is the retirement of coal-fired power plants in the United States without a comparable increase in power produced by renewable sources – primarily wind and solar – in parts of the Midwest and South that generate power used by Ameren, he said.

Electricity prices on the grid have risen as a result, and natural gas-fired plants have helped make up the gap in supply, increasing the demand for gas and driving up its price, Blessing said.

"We're not certain how long this is going to last," he said. "Fundamentally, what's driving this is high natural gas prices and a transition to clean energy in which the fossil fuel is declining faster than the new renewables are coming online."

He added, "We're really kind of subject to the markets, and there does not appear to be a very simple or fast solution to this."

To help deal with increases in their natural gas and electric bills, consumers should contact their local community action agency to get help from the mostly federally funded Low Income Home Energy Assistance Program, Kolata said.

The county agency, which serves people in households with incomes up to 200% of the federal poverty level – or up to $53,000 per year for a family of four – is at 2833 South Grand Ave. E. in Springfield and can be reached at 217-535-3120. More information is available online at bit.ly/powerbillshelp.

Blessing encouraged customers having problems paying their bills to contact Ameren to work out a payment plan or arrange for other assistance. Utilities are prohibited by law from cutting power or gas to customers in certain weather conditions and at certain times of the year.

Kolata said consumers should look into ways of saving money through energy conservation programs offered by utilities, which can include help in affording high-efficiency electric heating systems with heat pumps.

"I think the average consumer would be surprised how much they can save through energy-efficiency measures, some of which are basically no cost, and both Ameren and ComEd have incentive programs that can help people out," he said.

"The cheapest energy there is, is the energy you don't have to use," he said.