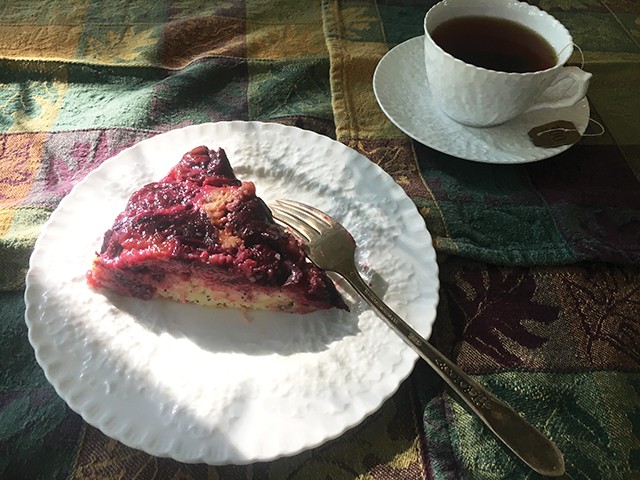 With the onset of crisp autumn weather, I’ve been eager to retreat into my kitchen and bake. Displays of ripe autumn fruit, stacked high on tables at the market, make me want to run home and turn off the news, turn on my oven and work myself into an apple and cinnamon-fueled oblivion. At times like these, when I’m baking purely for joy and comfort, I’ll often make an upside-down cake.

Pineapple is what comes to mind when most folks think of upside-down cake, but this type of cake has been popular since the 1800s, well before the advent of canned tropical fruit. They were often referred to as skillet cakes at that time because they were made in heavy cast-iron skillets and cooked on the stovetop, since home ovens were not yet in widespread use. Almost any fruit can be used in an upside-down cake, making it a perfect canvas for creative cooks. I scaled down my mother’s basic yellow cake recipe so that it would accommodate a skillet full of ripe fruit, butter and sugar.

For the apple cake, I employed one of my favorite methods for maximizing flavor-roasting. Peeled and quartered apples are tossed with butter before being lightly roasted in a hot oven, caramelizing them and concentrating their sugars. I also use this method when I make apple pie by first roasting the apple pieces before mixing them with sugar and cinnamon, then pouring the roasted apple mixture into my pie shell. Because the apple pieces shrink as they bake, this allows me to squeeze a full 6 pounds of apples into a single pie. This technique also works well with firm pears, and the fruit can be roasted several days ahead.

Upside-down cakes freeze well. Allow the cake to cool in the pan and then wrap it with plastic wrap, pan and all, before freezing. Unwrap the thawed cake and place in a hot oven for 5 minutes to loosen the cake in the pan before inverting onto a plate.

Preheat the oven to 425 degrees. Peel the apples and cut them into eighths. Toss them with the oil or melted butter, then spread them in a single layer on a parchment-lined baking sheet. Place in the hot oven and bake until lightly browned but still firm, about 20 minutes.

In the bowl of a mixer, combine ½ cup butter, flours, 1/2 cup granulated sugar, 1/2 cup brown sugar, salt, spices, baking soda, eggs and sour cream or yogurt. Mix on low speed to combine, then scrape down the sides. Beat on medium-high speed for 3 minutes until pale and very fluffy.

Make the butter-sugar topping by combining the remaining melted butter, brown sugar, cinnamon and salt. Spread this mixture in the bottom of the greased skillet or pan, then arrange the roasted apples on top. Spread the cake batter over the roasted apples, then place the cake pan on a baking sheet to catch any drips in case some of the apple-butter mixture bubbles over. Bake in a 350 degree oven for about 45 minutes or until a skewer inserted into the middle of the cake comes out clean.

Let the cake cool in the pan for 10 minutes. Run a knife around the edge of the pan, then place a serving plate upside down over the top of the cake. Invert the cake in one quick motion, then set it down firmly on the countertop to release the cake from the pan. Say a prayer, then lift up the cake pan to reveal the apple-topped cake.

Preheat the oven to 350 degrees. Lightly grease a 9-inch skillet or cake pan. Combine the topping ingredients and spread over the bottom of the pan, then arrange the plum halves on top.

Combine the remaining cake ingredients in the bowl of a mixer. Mix on low speed to combine, then stop and scrape down the sides of the bowl. Mix on medium-high speed for 3 more minutes until pale and fluffy. Spread over the plums, then bake in a 350 degree oven for 35-45 minutes until golden brown and a toothpick comes out clean when inserted into the center of the cake.

Let the cake cool in the pan for 10 minutes. Run a knife around the edge of the pan, then place a serving plate upside down over the top of the cake. Invert the cake in one quick motion then set it down firmly on the countertop to release the cake from the pan. Lift off the cake pan to reveal the plum topped cake.

(For a delicious holiday variation, omit the poppy seeds and substitute cranberries/orange for the plums/lemon.) 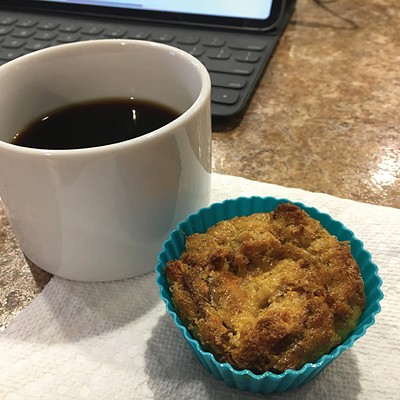