It’s capital vs. labor again in the Capitol 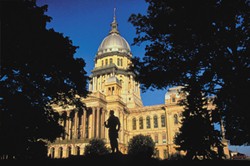 The news media, as their name suggests, focus on what is new in the world. Journalism’s only subject is current events – “current” having been defined of late to mean “within the past 10 minutes.” Yesterday is barely mentioned, last year is nearly forgotten, a century ago does not exist.

That does a disservice to the interested but uninformed citizen, because so much of what will happen next already happened a century ago. Consider the ongoing wrangle between Illinois’ governor and the speaker of its lower legislative house. Nothing about the press treatment of the power struggle between Rauner and Madigan is more misleading than its characterization as a partisan power play or a personality clash between two alpha males. This is not Rauner vs. Madigan, this is Capital vs. Labor all over again.

Illinois was a major battleground – literally – in a century-long contest between capital and labor over who would control the conditions of work. Beginning around the time of the Civil War, new industrial systems took the skill out of work, and thus rendered workers mere appendages to the company’s machines. In the new order, power belonged to those who could afford the machines; workers were useful only until someone invented better machines. The result was hunger, chronic poverty, murderous workplaces and poisoned cities. Collective action – regulation of the workplace and the economy by elected legislators and of the contract by labor unions – was the only way to protect not only workers but the public against this kind of predatory wealth.

In all of Illinois’ voluminous history of capital-labor conflict, I know of no instance in which workers organized to exploit capital, only to protect themselves against the whims of people who understand Bleak House as a how-to manual. Workers were exploited in the public sector too; AFSCME, remember, began as a workers association that pressed governments to honor the civil service rules meant to protect employees from arbitrary firings by patronage pols.

In that fight to protect themselves, state government in Illinois was anything but a neutral party, as John H. Keiser makes clear in his history of the state from 1865 to 1898, Building for the Centuries. Keiser – a name some readers will remember from his days at Sangamon State University – notes that one of the two most important roadblocks to unionism, apart from the intransigence of the owner class, was “the attitudes and actions of an unsympathetic government.”

The state government insisted that violence and the destruction of property [by strikers] be avoided, but it actually encouraged mayhem by legalizing the anti-union activities of management while declaring the weapons of organized labor to be criminal acts. By 1898 organization itself could be termed an illegal conspiracy. The boycott was forbidden. Striking, picketing and the peaceful spreading of propaganda could be halted by the injunction. Governors were encouraged to wield the National Guard against strikers more vigorously than they did. . . .

It took half century, much suffering and some blood, but by 1898 Illinois finally found a governor in Republican John Tanner who for the first time acted as a neutral referee in workplace disputes. For example, Tanner justified his sending in the state militia to intervene (in a coal strike in Virden, as it happened) on grounds that the miner had the same right to fight for his property, that being his labor, as the mine owner did to protect his property. Private-sector bosses however did not back off. As Keiser reminds us, there were no limitations on firings, blacklisting was common, lockouts were frequent, strikebreakers were widely protected by goons hired by local sheriffs who were in the pockets of the owners. That was the Illinois that Rauner wants to return to, where collective action embraced by capital in the form of price-fixing or monopoly is illegitimate when done by labor.

The progressive-era reforms that culminated in the New Deal left the U.S. with an economy whose excesses were constrained but whose central workings were left unfettered. Illinois has always thrived when neither capital nor labor are in the ascendancy, but when their ambitions are in a productive stasis. The system worked so well that subsequent generations of Americans – you, me, our parents – forgot why it was needed.

Today the fight is on again, only now the owners that organized labor works for are the public. The governor regards state government as a vulture capitalist views a company that lags in performance because of slack management and is ripe for a takeover. Having installed himself as the CEO, he is playing the boss. Writing that, I worry that I exaggerate. But his proposed contract with the state’s public employee unions would prohibit bargaining on pensions, wages, including overtime, vacations, holidays and any fringe benefits, employer-provided health insurance, hours of work and layoff rules. In his speeches he draws nasty distinctions between public employees and Illinois citizens that to my ear are echoes of the old curses directed at “foreign” labor agitators.

So if you want to know the news tomorrow, go to your local library today – assuming it has not yet had to close for lack of funding – and read up on some of our state’s unhappy history.