Understanding the harm in hate speech

Due to the apparent disregard for civility in discourse in our country recently, as well as more mood and behavior problems in students, heightened anxiety in minority students and a trend suggesting extremist groups are trying to recruit youth, exploring the effects of hate speech appears to be in order. Hate speech is defined as speech directed against an individual or group based on an arbitrary feature that is easily identifiable and stigmatizing, and leads to incitement. Hate speech illustrations involve dehumanization. Examples include metaphors of Jews as cockroaches in Nazi Germany and Tutsis as cockroaches in Rwanda, blacks as three-fifths of a person in the U.S. Constitution, Iraqi prisoners portrayed as dogs by their torturers and, more recently, people seeking refuge in the U.S. being referred to as animals.

Hate speech affects brain processes. Neuroscience research suggests that dehumanization has a dampening effect on neural mechanisms of pain empathy. Neural empathic mechanisms activate without our conscious awareness, suggesting that implicit bias occurs, not because of what we believe to be human, but what our non-conscious neural circuitry has been conditioned to most strongly associate with human traits. In other words, our brains make automatic associations that are negative and dehumanized, even if we do not consciously want to make these associations, based on frequent exposure to hate speech. In addition, the more exposure we have to hate speech, the more desensitized we become, which has been measured at a basic physiological level.

Hate speech causes harm. Hate speech leads to consequential harm, which persuades hearers to believe negative stereotypes and engage in harmful conduct while normalizing discrimination, and constitutive harm, which involves indirect effects related to power imbalances. The pathway to extremism starts with frustration, then involves engaging in hate speech with others, and eventually viewing violence as necessary before carrying out acts of violence or destruction for the benefit of an extremist group.

Countering hate speech. We can ensure social media regulations are being followed. For example, YouTube’s terms of service states, “We encourage free speech and defend everyone’s right to express unpopular points of view. But we do not permit hate speech: speech which attacks or demeans a group based on race or ethnic origin, religion, disability, gender, age, veteran status and sexual orientation/gender identity.”

We can also access resources such as the Anti-Defamation League, Women, Action, and the Media (WAM!), Online Hate Prevention Institute, the Sentinel Project (for genocide prevention), and Tell MAMA (Measuring Anti-Muslim Attacks). Education and promotion of respectful conduct can be facilitated by training sessions for bloggers, journalists and activists run by the No Hate Speech movement, as well as teaching materials and lesson plans developed by MediaSmarts. The Anti-Defamation League provides materials for assembly programs to address bullying and prejudice with the StepUp! Program, as well as provides a series of training programs for educators and providers regarding understanding and addressing cyberbullying.

Addressing hate speech with counterspeech (refuting hate speech through thoughtful, true and fact-bound arguments) has been found to influence a specific social media audience in the opposite direction of extreme opinions, especially of undecided individuals. The Anti-Defamation League recommends when responding to bigoted words, to 1) think, 2) act and 3) maintain dignity. Specifically, doing an emotional check-in is helpful after ensuring your safety, as well as addressing your concerns, engaging in respectful dialogue, and holding others accountable by letting them know that their words are not acceptable.

Words matter. Words affect how we think, how we feel, and how we act. With the wisdom of my grandmother, “If you can’t say something nice, don’t say anything,” or simply be kind. Surrounding ourselves with less caustic language is engaging in self-care. Just as hate speech conditions our brains, kindness is contagious. We can do better.

Melissa Fisher Paoni, Ph.D., is a licensed clinical psychologist and co-owner of the Springfield Psychological Center, 3416 Liberty Drive.  Paoni has been in practice for 18 years, and she specializes in evaluations and therapeutic interventions for children and adolescents.

We all have COVID fatigue 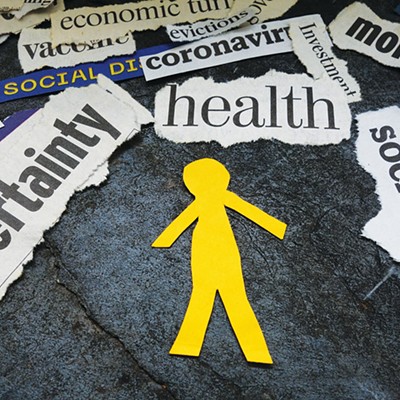