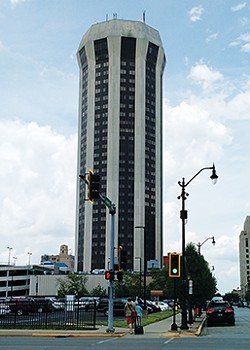 Photo by Bruce Rushton
A new owner is running a landmark Springfield building.

It was a foreclosure sparked in 2015, when the hotel owned by Egizii and the late Denny Polk (who died in 2016) changed brands from Hilton to Wyndham, contrary to terms of a mortgage that came with a $15 million balloon payment due in the spring of 2017. The bank and its loan servicing entity foreclosed in 2016, asking that the hotel be put into receivership on the grounds that the switch in brands without permission from the lender violated loan terms. The foreclosure lawsuit came two months after a preemptory shot from Egizii, whose partnership sued U.S. Bank, asking a judge to declare that there had been no loan default – after all, every required payment had been made in full and on time.

Egizii hasn’t paid the bank a nickel since the balloon payment came due last year, after Sangamon County Circuit Court Judge John Madonia rejected a 2016 request that a receiver be appointed. Egizii had been optimistic, telling me two years ago that he was positive he’d be able to refinance so the lawyers would go away. He appeared to have a sympathetic judge.

Back then, Madonia said that he wasn’t convinced that the bank could win. “Additionally, the court finds defendant has demonstrated good cause to deny the appointment of a receiver based upon the current operation of the hotel under defendant’s management combined with the potential negative impact that the appointment of a receiver could have on the operation of the hotel as a continued Wyndham franchise,” the judge decreed in the summer of 2016. In short, the hotel appeared to be functioning, and, at that point, Egizii was current on his payments.

Behind the scenes, Egizii says, he and his lender were clashing over improvements to the hotel. Before the switch to Wyndham, Hilton was demanding $20 million in upgrades, according to Egizii, who says he favored a $5 million plan, known in the hotel industry as a property improvement plan, or PIP. That wasn’t good enough for the bank and its loan servicer, Egizii says. “They stopped agreeing to the $5 million PIP,” Egizii says. “They wanted a Hilton PIP.”

The hotel has been an economic engine. In a 2017 filing in the foreclosure matter, Egizii’s lawyers wrote that monthly gross revenue averaged more than $900,000 and that the hotel employed 256 people. Turning the hotel over to a receiver, Egizii’s lawyers said then, would interfere with negotiations to expand a Starbucks operation on the hotel’s ground floor as well as impacting renovations to the parking garage that the hotel’s owner leases to the City of Springfield.

When the fight reheated last year following failure to refinance and make the balloon payment, Egizii’s lawyers warned that jobs would be lost if a receiver was appointed. Egizii also said that hotel revenues had been “severely impacted” due to the court fight. “Who would book a wedding, convention, family reunion, etc., in a hotel that might not exist on the day of the event?” attorneys for Egizii wrote in a motion objecting to the bank’s renewed call for receivership.

Phooey, retorted the bank’s lawyers, who last year labeled the plea to maintain the status quo an “unfounded emotional appeal.” Crescent Hotels and Resorts, the Virginia-based company that now runs the downtown Wyndham, has a business relationship with the hotel chain, the bank’s lawyers wrote in the 2017 motion to establish Crescent as receiver, and no hotel under Crescent management had ever lost a national brand. According to the 2017 filing, Crescent intended to continue operating the hotel as a Wyndham franchise, and that’s what has happened since Egizii in September settled the case by turning the property over to the bank and its loan servicer.

Crescent executives could not be reached for comment, nor could LNR representatives. According to Crescent’s website, the company manages 86 hotels and eight restaurants in the United States and Canada.

The hotel has a fair market value of $11.5 million, according to Sangamon County property records, and generates more than $320,000 in annual property taxes. Egizii calculates his equity in the hotel totaled $4 million. “But you can’t turn equity into cash,” he says. The hotel, he says, hadn’t made a profit in the past three or four years. “I would say it just broke even,” he said. While the court fight is over, neither side won, Egizzi says.

“All we did was, we made a deal – we walked and they took over,” he says. “They didn’t do very well, and I didn’t either.