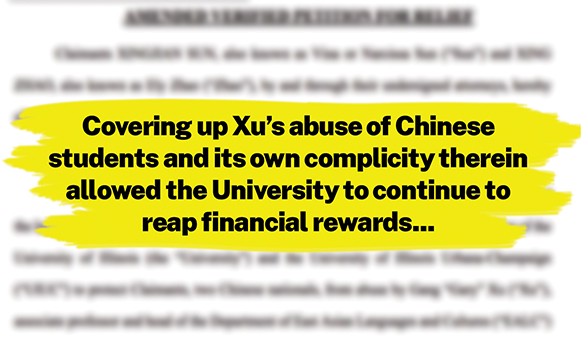 Credit Illinois Times
A quote from the lawsuit, which claims that when students were critical of a professor's alleged misconduct the university ignored or silenced them.

The lawsuit outlines claims that are part of another lawsuit the former students filed in September 2019 against former UIUC professor Gary Gang Xu. Both lawsuits allege that he raped and assaulted a former undergraduate student and forced another former student to do work for his commercial projects, for which she was uncredited and unpaid. The 2019 lawsuit, which is pending in federal court in Urbana, also claimed that the university had a financial incentive to keep what it knew about allegations against Xu quiet. The women now seek about $11.7 million from the U of I board of trustees for pain and suffering, unpaid wages and attorney fees.

Robin Kaler, a spokesperson for UIUC, said the university was aware of the most recent lawsuit but could not comment on its contents. "The university investigates and takes appropriate action whenever conduct is reported that may jeopardize or impact the safety or security of our students or others," Kaler said in an emailed statement. A lawyer representing Xu did not return repeated requests for comment by deadline. Xu denied sexual assault allegations reported by The Daily Illini student newspaper in 2018.

The 2021 lawsuit claims the university failed to investigate claims of sexual harassment and assault in a timely and adequate manner. Xingjian Sun, the plaintiff who detailed an abusive relationship with the professor, reported Xu's behavior to UIUC on multiple occasions. But she rescinded the claims shortly after "as is typical of a victim of domestic violence ... to protect her safety after Xu beat her and threatened to hurt her and her family if she did not," the lawsuit reads.

University officials "tried to keep things quiet, they tried to hush things up. They dropped reports, multiple times, in order to be able to keep the funding stream going," said attorney Alison Wilkinson, who represents the former students.

The U of I is a destination for students from China. The Urbana-Champaign campus enrolled only 37 undergraduate students from China in 2000, but by 2015 that number was close to 3,000, according to Inside Higher Ed. As Illinois Times reported in 2017, a former University of Illinois Springfield recruiter of Chinese students, Gary Yang, was accused of raping a UIS Chinese student. Yang pleaded guilty to raping the youth on her 17th birthday. Yang was released from prison last year.

Wilkinson said Chinese students under Xu's tutelage were especially vulnerable, as their visa status could be contingent on whether he passed them. The lawsuit claims Xu had a reputation within the UIUC community for exploiting female Chinese students. "No one felt empowered to do anything about it. So, the professors, the students, they didn't really know what to do," said Wilkinson. She pointed to a 2015 report prepared by UIUC that found only about half of students surveyed reported knowing where to turn for help after a sexual misconduct incident, and only about one in three understood the process following a misconduct report.

The U of I has been scrutinized for its handling of sexual misconduct claims in recent years, including those against Xu. He was one of several subjects of reporting by ProPublica's Local Reporting Network that detailed a pattern of the university allowing professors accused of sexual misconduct to quietly resign. Some, including Xu, collected pay after investigations found they violated policies.

According to court records, Sun sought a protective order against Xu in August 2015, after an incident in which she said Xu tried to run her over with his car. The incident brought renewed scrutiny from the university of Xu's behavior, the lawsuit claims. Xu was placed on administrative leave from January 2016 to August 2018, during which he collected his $85,446 annual salary. According to documents obtained by ProPublica and NPR Illinois, in August 2016 the university finalized an internal investigation involving claims from Sun beginning in 2014. It found Xu's relationship with Sun violated university policy and that Xu had violated a directive not to have contact with Sun. The university gave Xu a $10,000 bonus as part of the separation agreement he signed in 2017, and had him promise to keep details of the agreement confidential.

The university has made changes in its policies since allegations of harassment by professors have made national news in recent years. For example, the U of I board of trustees last year barred "intimate personal relationships" between undergraduate students and professors.

Still, Wilkinson said she hopes the lawsuit against the university will spark further change. "Policies that are not enforced are just words on paper," she said. "What we really need to see is not beautifully written policies, but we need to see students who are aware of their rights ... and a university that is there to protect them."

Mary Hansen, a reporter for NPR Illinois, contributed to this report. Rachel Otwell was lead reporter on a 2019 ProPublica Local Reporting Network series on faculty sexual misconduct. Hansen was an editor on that project.