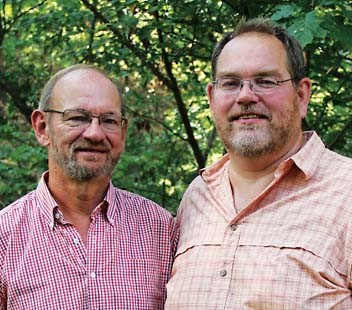 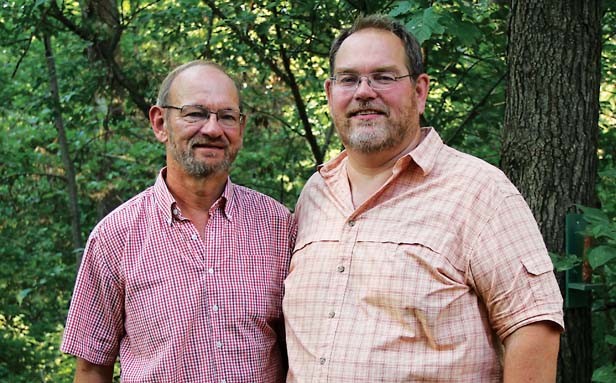 Bert Morton and Lee Korty of Springfield are plaintiffs in a lawsuit that seeks to legalize same-sex marriage in Illinois.

Randy Walden did everything right, but it wasn’t enough.

When Walden’s partner of nine years, Curt Sills, was diagnosed with cancer in 2002, Walden and Sills drew up documents giving Walden power of attorney and placing Walden in Sills’ living will. As Sills grew weaker in 2004 and had to be taken to the hospital, the two men found that their documents weren’t enough to protect their rights because they were gay and couldn’t legally marry.

Walden, a 12-year resident of Springfield and a veteran of the U.S. Army, says copies of the couple’s advance medical directive documents went missing from Sills’ medical chart several times, despite being stamped “Permanent Chart Copy – Do Not Remove.” The nurses refused to recognize Walden’s right to stay by Sills’ bedside or make decisions on his behalf, Walden says, instead insisting that only Sills’ parents or nonexistent spouse could do those things.

“Every single time there was a question about change of treatment, (the nurses) went straight to Curt’s parents and ignored me,” Walden says. “They kept telling the nurses, ‘You need to ask Randy about that,’ and I kept getting ‘Who are you to him?’ every time I asked the nurses a question. I got madder and madder and madder. Had we thought it would have been an end-of-life issue, it would have taken a police officer to get me out of his room.”

Walden says he wasn’t notified as Sills neared death, but Walden finally managed to gain access to his room just in time for Sills to utter, “I love you,” before slipping into a coma. Sills died eight hours later.

Walden and his new partner, Bob Carey of Springfield, committed to one another in a civil union ceremony in August 2011. The new couple wants to prevent a repeat of Walden’s previous experiences.

They joined 25 other couples in a pair of lawsuits filed this month in Cook County asking a judge to strike down as unconstitutional part of Illinois’ marriage law which defines marriage as between one man and one woman. If the lawsuit prevails, Illinois would join at least six other states and the District of Columbia in legalizing same-sex marriage. Illinois began allowing civil unions between same-sex couples in June 2011.

Cook County Clerk David Orr, the defendant in both lawsuits, issued a statement in support of same-sex marriage.

“The time is long past due for the State of Illinois to allow county clerks to issue marriage licenses to couples who want to make that commitment,” Orr said in a prepared statement. “I hope this lawsuit clears the last hurdle to achieving equal marriage rights for all. The courts have overcome discriminatory laws in the past and I trust they will do so again.”

Though Orr favors same-sex marriage and likely won’t mount a defense in the case, less sympathetic groups could ask the court for permission to file as “intervenors,” which would give them the ability to fight the lawsuit even if Orr doesn’t.

Karen Sheley, the ACLU attorney handling the issue, expects both lawsuits to be consolidated into one. Sheley says it will be the first same-sex marriage lawsuit in Illinois, though similar lawsuits in other states like Iowa have resulted in the legalization of same-sex marriage elsewhere. She calls civil unions a “novelty” that confers a “separate but unequal” status on same-sex couples, evoking the famous Brown v. Board of Education U.S. Supreme Court case that struck down racial segregation in schools.

“The new name (civil union) transforms the official status of these relationships from a celebration of love and commitment into a mundane entryway to spousal benefits,” Sheley wrote in the ACLU’s complaint. “The essence of marriage is a private and public celebration of love and commitment; civil unions fail to achieve that goal.  Marriage is something many hope for from a young age, an ideal they aspire to; civil unions are not.”

On May 31, a federal appeals court struck down the federal Defense of Marriage Act, which bars same-sex couples from receiving federal benefits like the ability to file a joint tax return, collect Social Security survivor benefits, and more.

Data from the Sangamon County Clerk’s office shows the county has issued at least 129 civil union licenses since Illinois legalized civil unions in June 2011, with 49 such licenses issued the first month.

Bert Morton and Lee Korty of Springfield say they were the second couple to apply for a civil union license in Sangamon County after that law took effect. Like Walden, their support of same-sex marriage comes from dealing with health problems. When Morton had a heart attack in 2006, they found their power of attorney documents weren’t well understood by nurses who simply wanted to know whether Morton was married or single for decision-making purposes.

“I might be near death, and (the nurses) are questioning whether I have a relationship or not,” Morton says. “The closest thing I have to a relationship is right outside the curtain, and after 30 years, they’re going to tell me I’m single? My God, what a thought to go into your last breath with.”

“If you look back on our history, we’ve moved toward a greater acceptance of people,” Morton says. “It doesn’t matter the color of your skin if you love somebody. I think someday we’ll look at this the same way.”