Turn leftovers into a tasty snack 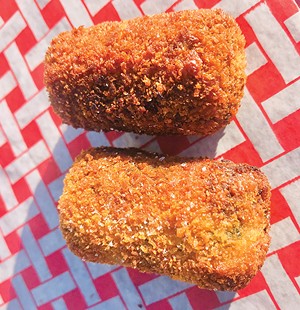 That old Yiddish adage Mann Tracht, Un Gott Lacht (which translates to Man plans and God Laughs), keeps running through my head these days. It's ironic that I decided to retire from dentistry to embark on a new career as a chef exactly one year before COVID-19 started shutting down the restaurants. Presumably the pandemic will fade away, but most certainly not in the foreseeable future. I had set myself a goal of reaching a certain level of culinary expertise by the time I'm 70. I'm 67 now and, thanks to the coronavirus, I've wasted almost a whole year traveling around the country in a school bus, waiting for things to return to normal.

Actually the last eight months have not been completely unproductive. I learned how to make steamed buns and cucumber kimchi at Miss Kim, a Korean restaurant in Ann Arbor. I perfected my sourdough skills and learned how to cure trout roe at Milkweed Inn at the Upper Peninsula of Michigan. And most recently I spent a week learning how to make Spanish tapas at Cúrate Tapas Bar in Asheville, North Carolina.

As an amusing aside, while en route from Michigan to North Carolina, I had a two-day stopover in Springfield. I called Chef Justin Richardson, who gave me my first restaurant job at Vele. He suggested we meet for a drink at his new restaurant, Curate, which opened after I had moved from Springfield. When I searched for the address on Google maps, Curate in Springfield and Cúrate in Asheville came up side by side.

Cúrate in Asheville specializes in Spanish tapas, little snacks meant to be enjoyed with a glass of sherry, wine, beer or cider. The owner chef, Katie Burton, walked away from a graduate program in molecular biology to study molecular gastronomy with Ferran Adria at his legendary restaurant El Bulli in Catalonia, Spain. The Nobel prize-nominated humanitarian and chef Jose Andres (founder of World Central Kitchen) became her mentor and close friend, helping her open Cúrate nine years ago.

Of all the tapas I learned to make at Cúrate, probably my favorite was the Croquetas de Pollo (Chicken Croquettes), little cylinders made of finely shredded roasted chicken and bechamel, breaded and fried. They can be served hot or at room temperature and can be a great way of repurposing leftovers. They take a bit of effort to prepare, but once they are rolled and coated, croquetas can be frozen and fried up anytime for a quick appetizer.

This year, with smaller family gatherings, there should be plenty of leftovers. Croquetas de Pavo (turkey croquettes) would be a great way to turn your leftover turkey into a tasty snack or appetizer. Mildly flavored and delightfully crunchy, they will be enjoyed by adults and children alike.

Recipe adapted and used with permission from Katie Button

Make the bechamel: Melt the butter in a large saucepan over low heat. Add the onion and cook, stirring occasionally, until translucent and soft but not all browned, about 15 minutes. Add the flour and cook, whisking continuously, just until the raw flour smell dissipates, about 1 minute. Continue whisking while adding the milk a little at a time to prevent the mixture from clumping. Whisk in the cream. Bring to a boil over medium heat, then boil for 2 to 3 minutes, whisking the whole time.

Add the turkey, salt, nutmeg and pepper and stir for 2 minutes to draw out some of the moisture. Spread the mixture on a half-sheet pan and refrigerate, uncovered, until cold.

Roll 1 heaping tablespoon of the croqueta mixture into a football shape. It should be about 2 inches long and 1 inch in diameter at its thickest point. Repeat with the remaining mixture. If the mixture has softened in the process, refrigerate until firm.

Process the panko in a food processor into fine crumbs, then transfer to a shallow dish. Beat the egg with 1 tablespoon water in another shallow dish and place the flour in a third dish.

Working with 4 or 5 pieces at a time, coat in flour and shake off excess, then coat with egg and let the excess drip off. Finally, dredge in the panko to completely cover. At this point, you can cover and refrigerate for up to 3 days or freeze the coated croquettes. When frozen rock hard, transfer to airtight containers and freeze for up to 1 month.

When ready to cook, fill a cast-iron skillet with high temperature cooking oil to a depth of ½ inch. Heat over high heat until you see ripples forming on the surface. Drop in one croqueta right away and wait until the oil gets hot enough (approximately 350 degrees). Add just enough croquetas to fit in a single layer, being careful not to crowd the pan. Cook until golden brown on one side, then using a fork or spoon, carefully flip them over and cook until golden brown on the other side, 3 to 5 minutes. Transfer to a paper towel-lined plate to soak up the excess oil. Repeat with remaining croquetas. Season them with a little salt.

Cool for at least 5 minutes before serving. You don't want to burn your tongue, and the croquetas taste great when completely cool, too. Serve them hot, warm or at room temperature.

This year Peter and his wife will be preparing Thanksgiving dinner for two on Bertha Bus, visiting with family via Zoom, and giving thanks that their COVID tests have come up negative.

Spicy chili crisp will see you through 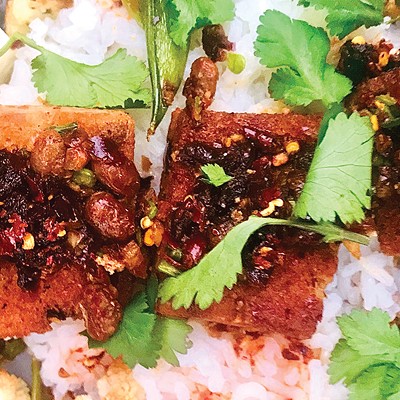