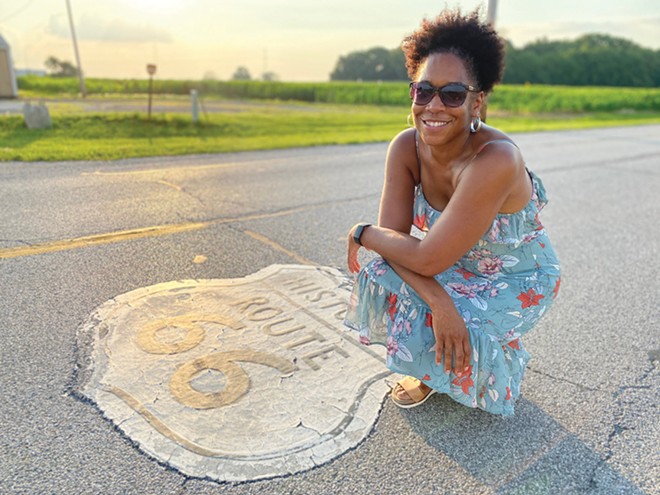 Credit: facebook.com/ltgovstratton
Lt. Gov. Juliana Stratton next to a Route 66 marker in Litchfield.

The Route History museum and souvenir shop in Springfield is currently closed due to coronavirus, but owners made a recent exception. On July 16, Stacy Grundy gave a tour to Lt. Gov. Juliana Stratton. The museum and souvenir shop tells the story of Black Route 66 travelers, as well as history surrounding Black entrepreneurship and other lesser known aspects of Springfield's history.

Grundy graduated high school in 2006. As a teen, Grundy said, she would travel from the small town in southern Illinois where she lived to Springfield for an internship. Her mother would tell her which towns were safe to stop for gas, and to call when she made it to Springfield safely.

Stratton, the first Black lieutenant governor, traveled historic Route 66 in Illinois earlier this month with her husband. Her father-in-law is a Mississippi native and had used the Green Book, a guide for Black motorists on how to navigate the country during the Jim Crow era, with details such as safe towns and stations to stop for gas. Stratton said this facet of history is something she has been trying to further bring to light.

"Route 66 is supposed to be this pathway to opportunity ... but for many of us, those opportunities didn't exist." She said these lessons are especially important given the current climate of civil uprising against systemic racism and police killings of Black people.

"With the Great Migration, the sundown towns also contributed. A lot of times people focus on who came from the South. But we came from southern Illinois too, because of racial violence in other parts of our state," said Stratton. "People don't talk about that."

Anna is not far from the town where Grundy grew up. It's about a 40-minute drive north of Cairo. Its history was "passed down from generations," Grundy said. Growing up, her family told her not to travel there after dark, and to stick to the highway when passing through.

Last year, Logan Jaffe of ProPublica Illinois wrote about Anna, after a townsperson there told her that Anna stood for: Ain't No N——-s Allowed. The piece described that while that's not the true genesis of the town's name, the sentiment has been a part of its identity.

Anna is one of the more than 500 Illinois localities scholar James Loewen has noted to be a sundown town, a place where Black people were not allowed after dark, enforced through policies and/or violence.

In a recent panel discussion about sundown towns, hosted by ProPublica Illinois, Loewen said that for him at 78 years old, the past month or so has been "some of the most fun" of his career – citing the removal of Confederate statues and Black Lives Matter protests in small towns such as Anna.

Loewen is a Decatur native. He said he found that 20 of the small towns surrounding his hometown were sundown towns. "I had no idea. I thought Black folks were just showing good judgment by not living in these dinky little towns too small to have a motion picture there, but no. Each of these towns had a policy, formal or informal." Loewen has said the 1908 "Race Riot" in Springfield – where Black homes and businesses were burned down and two innocent men were lynched – was an attempt to make it a sundown town.

While Anna is one of the small towns with these racist roots, it's also one of the smaller Illinois communities where demonstrators have gathered under the banner of Black Lives Matter this year. In June, around 200 people showed up for a protest. They flipped the A-N-N-A acronym to stand for: Ain't No Negativity Allowed. Co-organizer Takiyah Coleman is a young Anna resident, originally from Chicago. She said her Black family was warned Anna might not be a safe place to live. She said she wants residents and civic leaders to acknowledge racism is not just a thing of the past. "The first step is acknowledging that things are happening," she said during the panel. Efforts are not only about reckoning with history, but also present conditions. She and other organizers continue to stay connected through social media.

Back at the museum in Springfield, Stratton echoed others in saying an accurate telling of history is needed. "If you knew that for 400 years we were not allowed the same opportunity, then maybe it might make you more open and compassionate to say this is why we need change, but too many people don't know that history. It's not taught in our schools." Route History owners have been developing a curriculum they hope will be broadly taught to help rectify that.

Editorial note: The original version of this article stated Lt. Gov. Juliana Stratton traveled to visit her father-in-law in Mississippi in recent weeks. Stratton did not leave Illinois and her father-in-law now lives in the state.

A change was also made to remove imprecise language about the time period sundown towns were active.