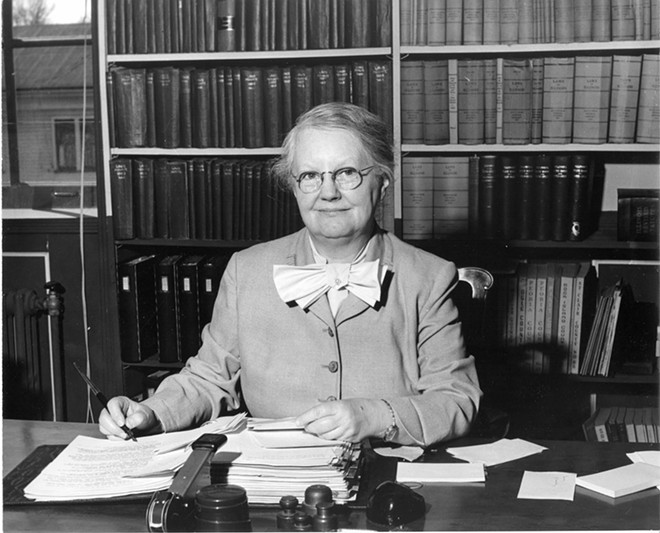 Margaret Cross Norton (1891-1984) served from 1922 to 1957 as the first archivist for the state of Illinois. She left behind a legacy that is unrivaled among state archivists.

Norton was born in 1891 in Rockford. She earned bachelor's and master's degrees in history from the University of Chicago and a library science degree from the New York Library School. Norton didn't especially want to be a librarian, but as she later noted, "At the time that I was in school there were only three professions open to women. One was nursing, one was teaching and the other was librarianship."

After working in various places for seven years, in 1922 she interviewed for a position with the Illinois State Historical Library. Instead, Secretary of State Louis Emmerson hired her to be the first archivist for the state of Illinois.

Norton entered a field dominated by men and historians. She quickly carved out a place for herself that earned her a national and even international reputation.

She saw a state archives as a vital part of government and not just as a place where old obscure documents were stored for historians to use. She stressed that archives made state government more efficient and more open. She actively worked with state agencies on their records, rather than wait for the agencies to decide which records to take to the archives. And, she insisted that archivists follow professional standards for record keeping, maintenance and accessibility.

With her proactive actions, when decisions were made for budgets and new programs, the archives had a voice that was listened to. Norton argued that state government needs archives as much as it needs any other state agency and that an archives isn't about the past but is about the present and even future operations of government.

An example of her work can be seen in the planning and construction of the archives building that now bears her name. During the height of the Depression she was able to make the case to policy makers of the importance of the building to state government. If state agencies were to properly do their jobs, they needed to make sure their records were safely stored and accessible. She then proceeded to take charge of the design and construction of the building, which opened in 1938.

While historians may have not liked the idea that they weren't the "highest priority" of a state archives, they have been the beneficiaries of the idea. Without her advocacy on behalf of the archives, many of the records we now have would not have been saved. Her efforts also gave the archives the resources, tools and professionalism to make these records available to the public.

During her 35 years as state archivist, Norton became a leading theoretician about the archives profession. She was a founding member of the Society of American Archivists and served terms as that organization's president and journal editor. In 1975 the SAA published a collection of her writings in the book Norton on Archives. It quickly became a standard textbook in classes on archives, library science and information management.

While Norton could debate archival theory with the best of them, she was always practical in her approach to a state government archives. Her successes in the rough and tough world of Illinois government and politics stand as testament to her pragmatism and beliefs.

Margaret Cross Norton is not seen in any of the ceremonial pictures taken of the 1936 groundbreaking for the archives building or for its 1938 grand opening, an oversight surely related to her gender. However, in 1995 the Illinois General Assembly voted to name the State Archives building the Margaret Cross Norton Building. It was the first building on the Capitol complex to be named after a woman.

David Joens is director of the Illinois State Archives.