The hometown as hero in mid-Illinois books 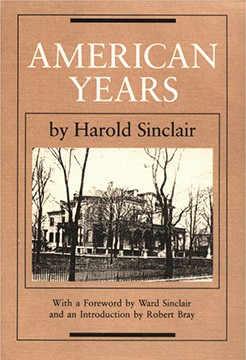 “This is, I think,” explained the author to an interviewer in 1947, “a departure from the usual method.” That departure was to write a novel in which an American town would be the chief character, with the human beings as the background. That novel was American Years by Bloomington writer Harold Sinclair, published in 1938. The book is the first of a trilogy that recounts in fiction the first century of Bloomington, which is disguised in no way but the name he gave it, “Everton.”

That conceit that the town is more than a mere setting for characters’ lives is central to several essential literary works of the Midwest, such as Winesburg, Ohio and Main Street. But such works usually offer characters who embody the town’s virtues or vices. Sinclair dispensed with the emblematic characters and made the town itself the central character.

If American Years was an historian’s version of a city, Mark Harris’ City of Discontent, was a fiction writer’s version of a city’s history. The subtitle states the author’s ambition and hints at his method: “An interpretive biography of Vachel Lindsay, being also the story of Springfield, Illinois, USA, and of the love of the poet for that city, that state, and that nation.” Laurence Goldstein, in the foreword to the University of Illinois Press’ 1992 edition, noted that Harris “wants to communicate the feel, not just the facts, of Lindsay’s experience. And the most intensely felt experiences, Harris argues, were those in Springfield.” Indeed they were; Springfield was both the villain and lover in that strange story. Goldstein observed that Harris’ Lindsay was a poet making a heroic stand against implacable social and economic forces, and what is a city but economic and social forces embodied? It would be interesting to know if Harris had read American Years.

No one would dispute that towns have different personalities. Champaign differs from Urbana, for example, and both from Springfield. Can they be said to have lives, however? They are born, grow old and die. In middle age they falter in the race against nimbler competitors. They blush with shame at things they have done, and they are capable of collective mourning for a loss, as Springfield still mourns the loss of its industrial economy.

What made American Years interesting in literary terms is what doomed it in commercial terms. The book was favorably, and on the whole astutely, reviewed. A few historians took issue with Sinclair’s trespass on their turf, in particular Harry E. Pratt, then executive secretary of the Abraham Lincoln Association in Springfield. The consensus among readers seemed to be that it was not quite enough of a novel and not quite enough of a history, and it sold only modestly. Locally, Bloomingtonians reacted to American Years pretty much as Springfield reacted to City of Discontent; their outrage did not quite mask their hurt feelings.

American Years is available, thanks to the U of I Press, which put out a new edition in 1988. That work features an introduction by Robert Bray, now the R. Forrest Colwell Professor of American Literature at Illinois Wesleyan University, that is worth the price of the book as an introduction to that novel and kindred works. While American Years is arguably the most interesting of Sinclair’s Illinois books because of what he attempted, Paul Angle thought the best of them in terms of what he achieved,being both stirring and historically accurate, was Westward the Tide, a 1940 novel about George Rogers Clark’s Illinois campaign during the American Revolution. Sinclair also was capable of first-rate journalism, the best example of which was The Port of New Orleans. The book that people remember him for, of course, was The Horse Soldiers, which was made into a mediocre movie starring John Wayne.

Apparently the family of Gov. Adlai Stevenson asked Sinclair to do a history of the family newspaper, the Pantagraph, which had been one of the great newspapers of Illinois’ golden age. The bohemian Sinclair was an odd choice for the patrician Stevensons; not surprisingly, they did not care for the result and the work was left unpublished until 1976. Sinclair also wrote a history of the Illinois home front during the Civil War that was never published.

Sinclair died in 1966, not yet 60. Of the several literary artists that this part of the world has coughed up, Sinclair is probably the most conventionally unconventional. Largely self-educated, he loved (and played) jazz, had chronic money troubles, drank too much, was moody and ambivalent about success. And, like so many such men, he found himself a wonderfully intelligent, forgiving, tolerant and adaptable wife; God looks after children and fools and writers, apparently.