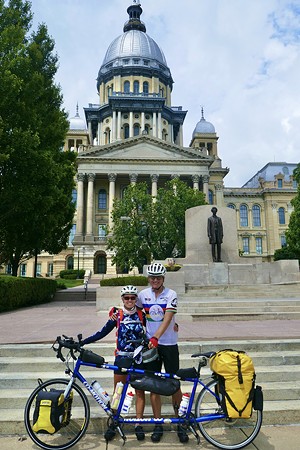 Vickie Wilson and Dan Reagin with their tandem bicycle enroute from Flagstaff to Chicago on Tour de Route 66.
On May 9, Dan Reagin and his wife, Vickie Wilson, set out on their tandem bicycle from Tucson, Arizona, on Tour de Route 66, a planned 2,200-mile trek along the Mother Road from Flagstaff to Chicago. When they arrived in Springfield last weekend, they had logged 1,867 miles across six states. This is from their blog.

On Saturday, June 26, day 34 of Tour de Route 66, we cycled from Litchfield to Springfield, Illinois. We took yesterday off in Litchfield because the forecast was calling for rain all day, with one to two inches of accumulation. Guess what? Not one drop of rain fell from sunrise to sunset. But there has been severe weather in central Illinois for a few days now and the forecast says it is going to continue for about another week.

We were a bit frustrated. So today we ride. We did a little bit of dancing around the rain and thunderstorms and tornado warnings and tornado watches. Being as Illinois is as flat as a pancake and we are out in the middle of cornfield country with a limited number of roads, shelter options can be very limited as well.

Today we rode up to Springfield, the capital of Illinois and one-time home of Abraham Lincoln. His presidential library is here in Springfield, along with several other historical museums. Half of our day was spent on the frontage road alongside the interstate, and the other half was spent on segregated cycleways and country farm roads. It's awesome that on day three of riding in Illinois farm country and over 100 miles in, segregated cycleways continue to be a thing.

Our route from Litchfield to Springfield was straight north for the entire day. Today it was gusting up to 25 mph straight out of the south. Can you say "tailwind"? We rode the first 40 miles of the day in just two hours. It was insane. We were rolling down the frontage road on pretty smooth pavement while we were maintaining over 31mph on a fully loaded tandem bicycle. It was awesome.

We rolled into Springfield before noon. Much too early to check into our hotel. So we rode around downtown and took a little self-guided tour. In doing so we happened upon a closed street which was hosting the weekly farmers market. They seem to be pretty proud of their farmers market here in downtown Springfield. So much so that they painted a mural in honor of said market.

We really liked the vibe in this district of downtown and there were several dining options for lunch. So we parked the bike and enjoyed a nice lunch at a popular sidewalk cafe. As usual several locals and tourists approached us and wanted to chat about our adventure and whatnot. Our bike is such a great conversation starter. I also think Vickie makes us pretty approachable. I would be such a lonely guy without her.

One gentleman who engaged us in conversation, Sam [Cahnman], used to be on the Springfield City Council. He had a wealth of knowledge about the town, of course, and we had a delightful chat with him. He ended up giving us two peaches from the batch he had purchased at the market. We ate them for dessert. He told us that he knew a local TV reporter and asked us if we would be interested in doing an interview for the local news. We told him that would be OK. We did not hear from the TV guy but Sam did invite us out to dinner later in the evening.

While we were lingering downtown, the first of two strong rain showers moved in on us. Fortunately we had good shelter at the time. Then we see the first tornado watch. So we check the weather radar again and did not see anything too menacing in the vicinity. We were only about five miles from our hotel so we decided to finish our day and ride over to our lodging destination.

Upon arriving at our hotel, we were advised that they did not have a room for us. They were overbooked, completely full. Not to worry, they said: the Ramada hotel across the street is our sister hotel and they will have a room for you. And indeed they did have a very nice room for us. I had looked at this Ramada hotel as a possibility for us, but the rooms were $150 per night. So I booked the hotel across the street for $77 for the night. Yep you guessed it: we are staying in a $150 room at the Ramada for $77 bucks.

Just as we are settling into our room we notice that it was really dark outside. So once again we check the weather radar and see that the tornado watch has now been upgraded to a tornado warning. Shortly thereafter, boy did it pour down rain and the wind was howling. It was crazy. Fortunately, we did not see any tornados.

Tomorrow we do the dance again. Another metric century. Our route is northeast bound for the whole day. The winds are forecast to continue to be out of the south so that will help move us along. Hopefully at the end of the day tomorrow the score will be: Mother Nature - zero. Team Tandem – 2.

For those trying to understand homelessness