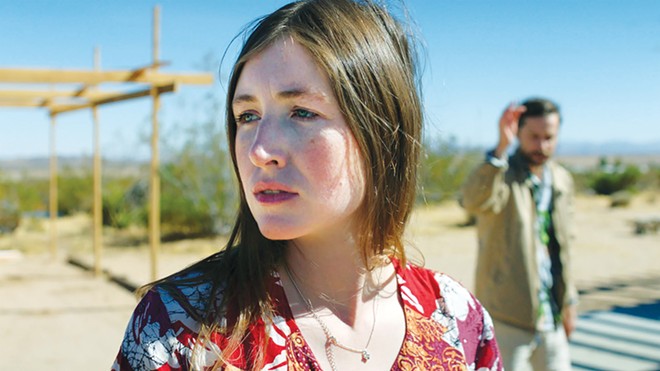 I've always been fascinated by the timeliness of movies. What with a usual lag time of about a year between the end of production and when a film hits the screen, that a feature speaks to social concerns occurring while it's playing means that either the director in question was very prescient or a bit of luck is at play. I tend to opt for the latter explanation, but there may be something more at play with Amy Seimetz's She Dies Tomorrow, an intriguing, at times frustrating horror film that slowly creeps under your skin, a movie that sticks with you despite some questionable narrative moments.

Seimetz begins with a striking image – an extreme close-up of one of Amy's eyes with the actress Kate Lynn Sheil expressing a gamut of emotions with her shifting gaze before settling on an expression that conveys a sense of inescapable dread. She has no reason to feel this way. She's just bought her first home, she's managed to kick a bad drinking habit and is young enough that life is full of possibilities. So why is she turning to the bottle again, shopping for cremation urns online and fixating on the notion that she'd like her skin used for a jacket after she dies? She can't really say, but she's thoroughly convinced she will die the next day and there's nothing she can do to prevent it.

This is a fascinating premise for a horror film, and Seimetz effectively exploits it by treating this sense of impending doom as a contagion. Amy's friend, Jane (Jane Adams,) comes by to check on her and before you know it, she too is convinced her time is up tomorrow. Upon visiting her brother (Chris Messina) and sister-in-law (Katie Aselton), she "infects" them, as well as their two guests (Tunde Adebimpe and Jennifer Kim) and does emergency room physician Doc (Josh Lucas) no favors when she visits him in an effort to find out what ails her. Needless to say, there's no cure readily at hand.

While the film runs a scant 84 minutes, there are moments when Seimetz lets the pace lag, too many scenes lacking the punch a film of this sort requires. And the inexplicable kaleidoscope of flashing lights that assail some of the victims when the insidious thought worms its way into their minds is a needless affectation that distracts, rather than captivates. Still, the cast is so thoroughly invested they keep us hooked to the end.

A sense of alienation permeates the movie. Repeatedly, characters don't listen to what's being said to them. At times, parallel conversations are occurring in which the speakers aren't connecting, and at other moments key things are left unsaid. The insular nature of every character and the sense of self-imposed isolation leads to a common feeling of paranoia that ultimately runs rampant, leading to fissures in our social fabric. Disinformation or a lack of information about what's ailing them only fosters a sense of baseless fear and helpless that simply can't be contained.

There's no question that Seimetz's film touches upon many hot-button issues we're contending with, what with the isolation caused by the COVID-19 epidemic and the political divisions that plague the nation. In the end, there's no explanation for what's causing the infection in She Dies Tomorrow and that ambiguity is in keeping with the times. While it's obvious what's causing our collective sense of foreboding, that we have no clear sense of how things will be resolved is enough to cause anyone to turn toward the darkness.