A pair of heavyweights are leaving the State Journal-Register.

Political writer and columnist Bernard Schoenburg and statehouse reporter Doug Finke have accepted buyouts and will be departing the paper on Dec. 1. Finke has worked at the SJ-R since the 1970s; Schoenburg’s first byline appeared in the paper in 1990.
click to enlarge 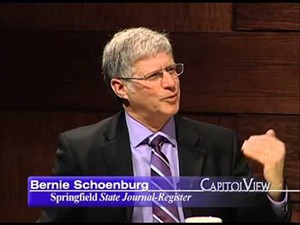 Their departures will leave the daily newspaper with two news reporters and an equal number of sports reporters, presuming Finke and Schoenburg are not replaced before their departures and current staff isn’t reassigned. The paper, which has no fulltime courts reporter or police reporter or city hall reporter or education reporter, has posted jobs for a statehouse/politics reporter as well as a cultural, diversity and inclusion reporter who will “focus coverage on culture, diversity and inclusion trends across central Illinois,” according to a job listing posted by Gannett, the SJ-R’s parent company.

Gannett is under heavy financial pressure. Stock in the company was trading at more than $6.50 a share when GateHouse Media, which had owned the SJ-R since 2007, bought Gannett in 2019 and dropped the GateHouse name. The stock closed today at $1.74 per share. A $1.8 billion loan from Apollo Capital Management, a private equity firm that financed the GateHouse-Gannett deal, that came with an 11.5% interest rate is due in 2024.

At the SJ-R, Schoenburg became legendary for his messy desk, his tendency to dress better than most politicians he covered and an ever-present tape recorder he used to capture even the most inconsequential of interviews, making claims of being misquoted tough to sustain. Finke has been as rumpled as Schoenburg is dapper, wearing a sport coat almost grudgingly, it seemed, as if in sartorial surrender to statehouse rules setting minimum standards. “I swear, it was the same coat forever – either that, or he had no imagination,” recalls Pat Coburn, retired SJ-R publisher. “I don’t think he suffered fools gladly. He came off, personally, as sort of an irascible old fart, beyond his age: I think he was born that way.”

Schoenburg and Finke will be tough to replace, said Mike Kienzler, former SJ-R city editor. “As far as statehouse coverage goes, they’re the most experienced team there – John O’Connor (of the Associated Press), by himself, is maybe the only competition. I have a hard time talking about them as individuals – they’re both great. There will be a depth of understanding and history and connection that simply can’t be replaced, no matter whether they hire more people to replace them. They’re not going to be able to replace their backgrounds and their knowledge.”