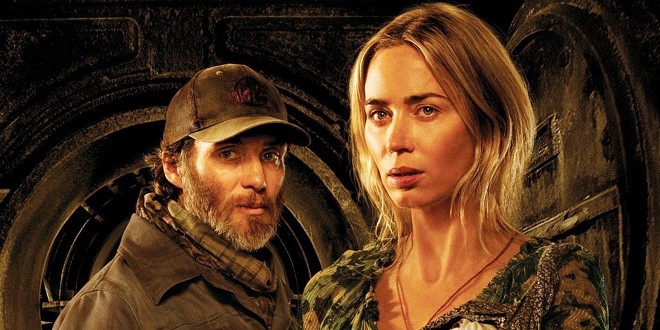 Quiet Place 2: Long on thrills, short on logic
A surprise hit from 2018, John Krasinski’s A Quiet Place managed to scare audiences with a sense of impending dread using malevolent aliens who, though blind, react to the most minute sounds in order to hunt their prey. Viewers were so taken in by the on-screen threat, they too were afraid to make a sound.

In the sequel, Krasinski effectively pulls off the same trick, as we witness the Abbotts- grizzly bear momma Evelyn (Emily Blunt), resourceful hearing-impaired daughter Regan (Millicent Simmonds) and scared of his own shadow, pre-teen Marcus (Noah Jupe) - try to pick up the pieces of their shattered lives.

The story, such as it is, is of little consequence. Part II is a thrill machine, it’s only purpose to get the viewer to the edge of their seats and push them over, which it does effectively, again and again. I just wish the script was as tight. Far too often, characters act inconsistently, while continuity mistakes during key moments are obvious cheats. For many, Part II will be good enough, if they check their brains at the door. In theaters.

Charming Spirit fine family fare
To be sure, I don’t belong to the demographic that Spirit Untamed is pitched to – I’ve never spent much time with horses, nor have I ever been mistaken for a pre-teen girl – but I’ll be darned if I didn’t have fun with this latest entry, in what I’ve learned is an extensive television and film franchise.

Apparently, the titular horse constantly lives up to her name and meets a kindred soul in Lucky Prescott (voice by Isabela Merced), a New York City transplant who’s ventured out west to be reunited with her father (Jake Gyllenhaal). The relationship between them, to say the least, is rocky, but the young girl can connect with the renegade stallion who a group of outlaws is trying to tame.

Lucky won’t have it, and along with her friends Abby (Mckenna Grace) and Pru (Marsai Martin), she sets out to rescue Spirit but must cross treacherous terrain to do so. Vividly animated and briskly paced, the movie is bolstered by an infectious sense of exuberance that sweeps us away. A gentle film, this is the sort of family fare children will love and parents, in the end, won’t mind sitting through. In theaters.

Collette takes Horse to the finish line
There’s an unassuming quality to Dream Horse, a based-on-fact account of Dream Alliance, the underdog of all underdogs in the horse racing world. Short on melodrama but long on sincerity, the film is anchored by the always reliable Toni Colette as Jan Vokes, a woman in need of a bit of hope. She finds it through Howard Davies (Damian Lewis), a regular at the bar where she works. Overhearing his tales of once owning a racehorse, a seed is planted that blossoms into the most improbable of dreams.

Vokes and her husband, Brian (Owen Teale), manage to purchase a brood mare and breed her; the result is a quarter horse they dub Dream Alliance. The animal’s career on the track is fascinating, and screenwriter Neil McKay provides additional color with the group of eccentrics who make up the syndicate that sponsors her. There are no surprises in movies such as this, and that’s fine. We look to sports films for inspiration as, like Jan, we need to be reminded of the power of hope. Dream Horse ably supplies this, the titular animal continuing to inspire long after her final race. In theaters.