Featuring specials to help you celebrate

For the second year in a row, the Illinois Times 217 Black Restaurant weekend is highlighting Black-owned businesses and the delicious flavors that they bring to the capital city. This event is anchored by Springfield's annual weekend-long Juneteenth celebration, which recognizes the day in 1865 when the last enslaved people in Texas received word of their emancipation, three years after the signing of the Emancipation Proclamation. This year the festivities kick off on Friday, June 18, with a rally at the Capitol, followed by a Juneteenth Parade and celebration at Comer Cox Park on Saturday, before capping off with a revival on Sunday, also at Comer Cox Park. To help you celebrate, these three locally owned Black restaurants will be featuring food and drink specials all weekend long.

After a fire ravaged its location in July of 2020, MJ's Fish and Chicken Express was forced to close for four months. When they reopened, the formerly spartan interior had been transformed into a warm and inviting space with a polished wood bar and cheerful decor. "It's like you're coming to dinner at our house, that's the feel we were trying to create," said Margaret Taylor, who owns the restaurant with her husband, Jerome. And although the interior has been updated, the food is still as delicious and comforting as it's always been. "Some of the recipes that we prepare, such as our collard greens, mac and cheese and green beans – those recipes have been in my family for over 100 years," explained Margaret, who grew up in Mississippi. Jerome also comes from a long tradition of cooks. Originally from Cairo, Illinois, Jerome started frying chicken and fish for his families' Friday night get-togethers when he was just a teenager. He eventually moved to the Springfield area and worked for Roberts Distributing/Sysco in the warehouse and as a driver for nearly 30 years before starting MJ's eight years ago. They've been in their current location on Enos Avenue for three years and have since established a loyal following of hungry customers, winning the Best Soul Food in the Illinois Times Best of Springfield Awards two years running.

While they are known for their excellent fried chicken and fish, MJ's also serves up tender slabs of ribs, crispy pork tenderloin and a stellar selection of sides, including fried green tomatoes, sweet potatoes, spaghetti with meat sauce, and succulent fried cabbage. New to the menu this year is a Southern-style cucumber and onion salad, which serves as a welcome foil to the other rich offerings on the menu. Hungry patrons should check out their ever changing daily specials as well as homemade desserts like caramel cake, cherry cheesecake and lemon meringue pie.

Since opening their Springfield location in March of 2020, Jerk Shop Go has quickly become a fixture on the downtown restaurant scene and was awarded the Illinois Times Best of Springfield Award for Best New Business that same year. Owner Kadejia Berkley originally hails from the Austin neighborhood in Chicago where her family opened their first location, the Jerk Shop, in 2014. After moving to Macomb to attend Western Illinois University with her triplet sisters, Berkley and her family opened Jerk Shop Go, a walk-up location serving up "Caribbean Flavor with a twist" to hungry college students. The Macomb location closed in 2019 after the sisters graduated, but it wasn't long after moving to Springfield for an internship that Berkley seized the opportunity to bring her family's island-inspired flavors to the capital city. In spite of opening just before the onset of the pandemic, the business has managed to hold on and even expand during quarantine, opening a second location in White Oaks Mall in February of 2021.

The menu is eclectic and perfectly suited to carryout, an asset during a year of difficult lockdown restrictions. Fusion-inspired dishes pepper the menu, such as jerk quesadillas made with seasoned beef or chicken, jerk egg rolls, jerk nachos and even a juicy jerk-style Philly sandwich, loaded with cheese, peppers and onions. Sides like sautéed sweet corn, red beans and rice, and smothered cabbage round out the menu. Portions are generous and the recipes are heavily spiced with traditional Caribbean flavors. Jerk marinated chicken wings are available on Wednesdays, but get there early because they sell out quickly.

Anchors Away serves up Creole-inspired flavors in its historic downtown location, a space which many locals will remember as Norb Andy's. The restaurant was opened in 2018 by Jeff Moore, who relocated the restaurant from its original location in Peoria to its current home in Springfield. The interior of the downtown space has been updated with a new bar, fresh paint and nautical décor, but still has the same intimate ambience that many will remember, including the large ship's wheel at the restaurant's entrance.

The menu boasts a variety of dishes from the Big Easy, such as crawfish étouffée, New Orleans-style barbeque shrimp, po' boy sandwiches, blackened catfish and fried frog legs, as well as standard fare like burgers and steak. Also popular are the seafood steamer bags, in which guests are invited to choose from options like snow crab legs, shrimp, mussels and lobster, along with add-ons like new potatoes and corn on the cob with their choice of seasoning and level of spice. 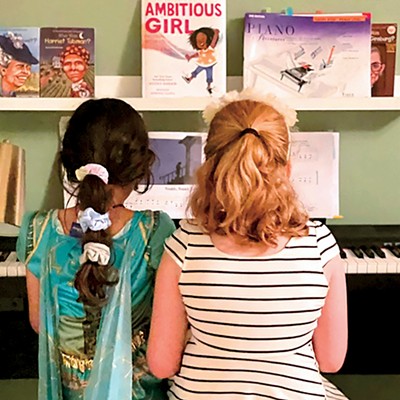