This zoo is becoming a whole different animal

Henson Robinson Zoo, has a new director, new animal exhibits and a plan for the future 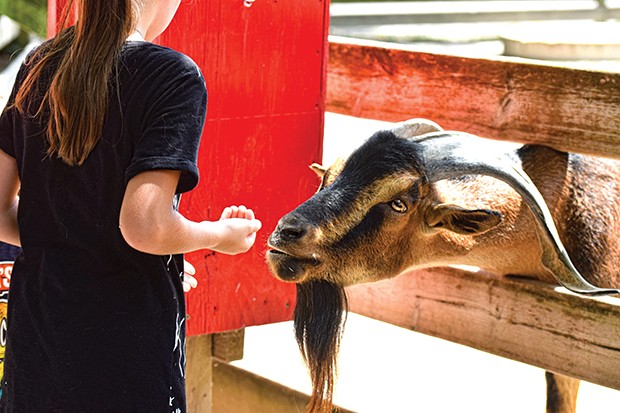 Photo by Christina Stampf
A visitor feeds Typhoon, a male San Clemente goat. There is feed available to give to a variety of animals in the petting zoo.

Things are looking up at the Henson Robinson Zoo. Built in the late 1960s and opening in 1970, Henson Robinson has been the area’s top attraction in central Illinois for those hoping to see rare and beautiful animals.

Jeff Mitchell, general curator at Henson Robinson, has been with the zoo for a year and a half, having spent 25 years working with animals at zoos all over the Midwest. “Even as long as I have been doing this, I still can learn something new,” he says. Mitchell’s specialties were fish and reptiles, but he has found a number of other passions here at the Springfield zoo, with several new additions coming on board.

“We have lots of fun new things going on here,” says Mitchell, who was excited at the arrival of two Alaskan baby black bears last fall. Each was found orphaned in the Alaskan wilderness last year when they were approximately 3 months old. “Klondike and Kenai are growing rapidly. We had vets come in from Brookfield and the University of Illinois to work with the bears. It was a very busy day.”

Along with the baby bears, some of the more popular zoo animals include the otters, spider monkeys, lemurs and langers. “People are also fascinated by the wild painted dogs. They just love them,” says Mitchell. “Then we have the lemurs, which are from Madagascar. And the langers are like Asian lemurs.” The zoo recently brought in a group of three male langers from the Columbus Zoo. On occasion they will bring in only bachelor groups, which eliminates breeding but keeps the social aspect for the animals in place.

The zoo takes part in the American Species Survival Plan (SSP) which was formed in 1981 to help ensure the survival of selected endangered species in zoos and aquariums. The SSP manages the breeding of these species in order to ensure health and genetic diversity. In January, the zoo welcomed a baby white-eared titi monkey. “We own the female, Maniqui. The male, Wally, is from the Bronx Zoo,” says Mitchell. “This is a neat cooperation project with zoos across the nation. The Bronx Zoo will get the baby this year and, when they breed again, we will get the baby next year.” According to Mitchell, geneticists work full time to match the male and female of each species to ensure the best outcome. 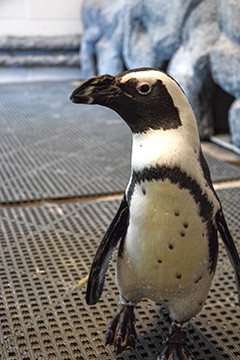 Photo by Christina Stampf
Nelson is a male African penguin. During a recent heatwave Nelson was kept inside with his four other tuxedoed friends. P

Other new additions include two baby red ruffed lemurs, another endangered species, born in the spring of 2018. They also now have a new pair of red-billed hornbills, Kim and Sara, which are the smallest of the hornbill species. They will have a brand new home at the zoo very soon. A baby gray titi monkey was born this past January and is doing very well. “For the first two weeks of its life, the titi monkey will stay exclusively with Mom for nursing. After that, though, almost all of its time is spent with Dad,” says Mitchell.

When most animals arrive at the zoo, they are put in quarantine for anywhere from 30 to 90 days, depending on the species. “We get blood work, a radiograph, fecal check. Basically we do a complete physical when all new animals are brought in,” says Mitchell. “Many depend on where the animals come from. Sometimes if we get an animal transferred from another zoo, they don’t even go into quarantine.” One species that takes the full 90-day period is the snake, as it takes much longer for parasites to fully die off than with other animals.

The events schedule at Henson Robinson Zoo is packed full of fun for the entire family all year round, as the zoo always looks to be more interactive with people. The popular Dr. Doolittle Day is held every spring with great success. “Veterinarians come out and set up a booth and cover different aspects of animal health care,” says Mitchell. “Each have interactions with the kids on what they do for animals. It is a learning opportunity and an opportunity to give back to the kids.”

Tat-Zoo Day this past July was also a success for the zoo. The event featured real tattoo artists, temporary tattoos, henna tattoos, face painting, food trucks and animal interactions. “More than 300 people showed up to the event, and the zoo raised more than $500 for the Krejci Laboratory at Bethune-Cookman University. They are working on climate change and effects on seahorses and algae blooms in the Caribbean Sea,” says Mitchell.

The Fur Feather Fin Fall Fling, scheduled for Sept. 28, helps show people how animals are prepared in the fall for the upcoming winter weather. The event includes vendors, games and crafts for children. “Weather can be a factor when deciding what animals can be brought in,” says Mitchell.

Fast forward to wintertime, the Winterland Holiday Zoo Lights event is an annual tradition that is gaining popularity each year. “We always want to make that one more interactive – with food vendors, meetings with Santa and photo booths,” says Mitchell. The event runs every weekend from the end of November through the last weekend in December.

Children are encouraged to take advantage of all the fun educational opportunities offered by the zoo. Zoo Tots, offered several days during the week, gives children ages 2-5 the chance to experience the zoo through stories, animal visits, games and crafts. For the 5-9 age group, the zoo offers Zooper Edventures, Saturday classes which includes theme-related games and crafts, along with a zoo discovery walk.

Mitchell and the rest of the Henson Robinson administrators are busy working on a new master plan for the zoo. “We are passionate about making sure we take care of the buildings and infrastructure we have, before building new things,” he says. Mitchell is excited about the future arrival of two binturongs headed to the zoo. “Those are bear cats, like Asian wolverines. We have a pair coming in shortly.”

To keep the zoo continually moving forward, Henson Robinson has been looking for help in the form of grants and outside volunteers to assist with regular necessities. ZooGOERS adult volunteers have been a great help to the zoo over the years, as they help with animal diet preparation, guest greeting, special events and kids classes. “This group has to be over 18, and they help cut the food to feed to the animals. This has saved us several hours of time,” says Mitchell. 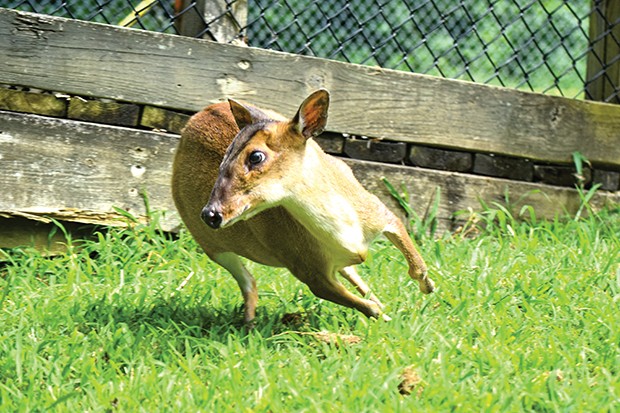 Photo by Christina Stampf
This is Billie. She is a Muntjac, also known as a barking deer. She can be found running around between the red-crested lemur and black bear enclosures.

The Springfield Zoological Society, a fundraising and promotion arm of the Henson Robinson Zoo for 25 years, has provided grants for District 186 so students can visit the zoo. “Schools can’t always afford the cost of buses and lunches in order to get the kids out here to visit the zoo,” says Mitchell. The Zoo Society consists of a seven-member board that focuses on helping the zoo achieve its mission.

“Regarding District 186, this is a new partnership for them, and Jeff is hoping to help teachers supplement their curriculums regarding conservation and biology with hands-on experiences,” says Lynne Slightom, president of the Zoo Society. “They are really hoping to bring kids out to the zoo for an experience they would not get otherwise. There has been a lot of research done that children who are introduced to animals and learn how to respect their environment and animals are more likely to have better relationships with their peers and family.”

Slightom has worked for Salvation Army and has seen numerous children who have never had the opportunity to go outside their neighborhood, let alone visit the zoo. She is hoping to close this gap. “Jeff said one of his missions is for the Henson Robinson Zoo to not only be a place for families to come and enjoy the Park District but also an integral part of the Springfield community and a place that gives back,” she says. “He recently called a local nonprofit and asked what kind of school supplies they needed and personally bought items that had not been donated yet.”

Attendance at the zoo has been good, according to Mitchell. “In May and June, we made our attendance and income budget goals. That was the first time in 12 years making it two months in a row,” he says. The zoo’s social media presence has played a major role in boosting attendance, given the number of videos and other giveaways being posted. “The Facebook page has grown exponentially. A lot of work was put into that. We are reaching out to new people all the time.”

What does a bear do to prepare for the winter? How many miles does a crane have to fly to migrate? Where do the bees go?  Get these pressing questions answered and find out more about how animals, plants and people prepare for the cooler seasons at Henson Robinson  Zoo’s annual Fur, Feather, Fin Fall Fling, Saturday, Sept. 28, 10 a.m.-2 p.m. Join the zoo for a fun-filled day of animal education programs, garden activities, face painting, games and crafts.  Visit with the vendors and chat with a zookeeper.  Plush toys of the zoo’s two Alaskan bear cubs, Kenai and Klondike, will be available for purchase, and for $4 you can enjoy a hot dog lunch to keep yourself fueled up for more action. This interactive event is great for all ages. The special event admission pricing is $5 for adults and $2 for children.

Eric Woods of Springfield has been a local freelance writer for nearly 15 years. He is a published author of two novels, PUMMELED and the newly released Dragon’s Blood.

A look at Halloween's merry spirits 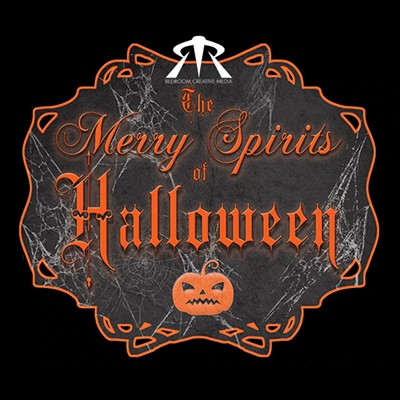