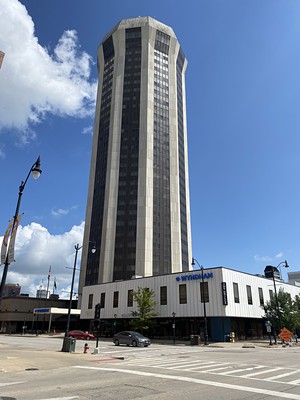 Mayor Jim Langfelder said the developer, David Mitchell of GoodHomes, submitted a new proposal after the City Council's 5-4 vote Aug. 3 on a zoning variance that would have allowed for more than 200 apartment units in the 30-story site at 700 E. Adams St. and 100 hotel rooms.

Because the plan didn't receive enough votes from the Springfield Planning and Zoning Commission, seven votes were required from City Council members for the measure to receive final approval.

Mitchell on Aug. 9 filed a new proposal allowing for 275 apartment units and 125 hotel rooms. The new zoning request is scheduled to be heard Sept. 21 by the zoning commission and Oct. 18 by the City Council.

Mitchell "can bring resources to Springfield that we currently don't have," Langfelder said.

The mayor usually doesn't take part in council votes but voted "yes" on the zoning measure Aug. 3 along with council members Shawn Gregory of Ward 2, Roy Williams Jr. of Ward 3, Lakeisha Purchase of Ward 5 and Joe McMenamin of Ward 7.

Voting "no" were Chuck Redpath of Ward 1, John Fulgenzi of Ward 4, Erin Conley of Ward 8 and Jim Donelan of Ward 9.

"I was hoping it would pass, of course," Langfelder said.

Absent were council members Kristin DiCenso of Ward 6 and Ralph Hanauer of Ward 10. They both had opposed GoodHomes on July 19, when the council voted 5-5 on a slightly different proposal from the company. Langfelder didn't participate in that vote.

Langfelder said he helped convince Mitchell and the hotel's current owner, Al Rajabi, to return to city officials a third time. "If it weren't for me, they'd be long gone," the mayor said.

He said the project, which involves preserving a downtown building, expanding downtown living options and preserving some hotel rooms, is worth his time.

"It's of huge importance to the city, not just the downtown, but the whole city," he said.

Comments from council members indicated they continue to worry that the proposed conversion would result in Springfield losing out on some money-making conventions in 2023 and 2024 because of fewer hotel rooms available downtown.

Groups often book conventions at the Bank of Springfield Center, at least in part, for the convenience of housing all convention-goers at the Wyndham and the Abraham Lincoln DoubleTree Hotel across the street without anyone needing to walk or take a shuttle bus to other hotels, according to Scott Dahl, director of the Springfield Convention and Visitors Bureau.

The Aug. 3 proposal from GoodHomes would have the company buying the 400-plus-room hotel from Rajabi of Texas-based Tower Capital Group.

At the end of the renovation, GoodHomes would use a third party to operate 100 units on floors two through seven as hotel rooms. Three hundred apartments would be created on floors eight through 29, and there would be an observation deck and food court for the general public on the top floor.

The previous proposal called for 80 hotel rooms and 320 apartments.

Conley flipped her vote from "yes" on July 19 to "no" on Aug. 3. She said her "yes" vote "was tentative at best the first time this came forward."

Conley said she voted against the plan after "getting a better feel for the proposal" and "a better feel for the impacts on our city at large. ... I talked to more people who raised additional concerns and issues. Seeing all of those hotel rooms lost in a building that has been really a mainstay in terms of hotel space, in the end, was not the right decision for me.

"I would like to see more downtown housing. We absolutely need more apartments, but we have a lot of buildings that could be renovated and could be converted into apartment space."

Mitchell told the council his study of the downtown rental market showed only a handful of units available for rent.

"Most of the apartments had long waiting lists," he said.

Langfelder said he informed council members ahead of the Aug. 3 meeting that they could propose an amendment to the zoning variance to increase the number of hotel rooms beyond 100. No one proposed such an amendment before the vote.

GoodHomes says it has developed and financed more than $10 billion in development in the United States the past 15 years.

Ryan McCrady, president and CEO of the Springfield Sangamon Growth Alliance, took no stand on the company's Springfield proposal but said Mitchell is a "qualified developer" and has completed comparable projects in communities similar to Springfield in size.

Rajabi, who acquired the Wyndham in a bankruptcy proceeding in 2019, told the council July 19 that he had a major payment due on his loan for the property Aug. 10 and doesn't plan to give up the property to the lender.

He said the reduction in hotel business associated with COVID-19 in 2020 and 2021 prevented him from finding a lender willing to finance renovation of the 49-year-old hotel into a Delta by Marriott hotel that he originally planned after the acquisition.

Rajabi attended the Aug. 3 council meeting but didn't speak; he told the council July 19 that if he was unable to sell to Mitchell, he would convert the building into 200 government-subsidized apartments for low-income renters and no hotel space.

McMenamin said, "Unless we reach a compromise on the zoning, we face the risk of losing all the hotel rooms."

He said the loss of the building as a hotel and its potential conversion to low-income housing would be "a devastating blow to our downtown ... It's a death kiss."

Asked whether she believed Rajabi would carry through on his threat of converting the building into low-income apartments, Conley said: "I'm not convinced that'll happen.

"I think that the building itself is of more value as a hotel and not as 200 Section 8 apartments. ... I'm not sure if it was a bluff. ... I'm hoping that common sense will rule out and the hotel will be allowed to be sold to someone who will make an investment and actually run it as a hotel."

Dahl said hotel occupancy citywide is at 66% and in line with pre-pandemic levels. He said occupancy probably will rise in 2023 and 2024 with the expected opening of the Scheels Sports Complex near Interstate 72.

Because of the positive trend, Dahl said he would encourage Rajabi to reconsider renovating the hotel. The hotel currently rents 27 units as apartments.

Langfelder said after the Aug. 3 meeting that he had empathy for Rajabi.

Regarding Dahl's advice, Langfelder said, "That's nice when you're talking about somebody else's money, but when you're talking about your own bankroll, that gets a little difficult to say: 'Oh, just wait. You stayed open for the pandemic, and you had major losses, you owe the city $1 million in utility bills, but we want you to hold on for another two years for the what-if.'"

The city has a lien against the Wyndham property, so the $1.1 million owed to City Water, Light and Power would be paid by the new owner if and when the building is sold.