Things to do with bacon fat 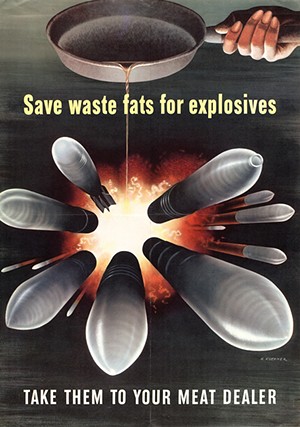 My love of bacon has been my biggest deterrent to embracing full-out vegetarianism. When I was attending the University of Illinois College of Dentistry, I had an apartment in Oak Park, home to 25 Frank Lloyd Wright structures. In the early morning I'd go for a run through the historic Frank Lloyd Wright District, and my route would take me through the back alleys behind some of the houses he designed. From the alley behind one of these houses, I was always greeted by the smoky aroma of bacon frying. This was my morning ritual for four years. This sensory memory has stayed with me for 45 years.

Back around 2005 I started hearing a lot of buzz about Benton's Country Hams. High-profile New York chefs, including David Chang of Momofuku, were singing the praises of the heavily smoked bacon and hams coming out of a dingy cinder block smokehouse located 40 miles south of Knoxville, Tennessee. Intrigued, I ordered an assortment of Benton products – ham, bacon and prosciutto – and had them shipped to my dental office. I was in a treatment room working on a patient when I detected a wonderful smoky aroma. UPS has just delivered my package, and even through the insulated box, the smell of smoked pork products had filled my clinic.

Benton's bacon is expensive, but not outrageous. It's about $8 a pound, but the $24 shipping cost makes it too pricey for everyday use. When I discovered that the restaurant I was working for in Oklahoma City was ordering Benton's hams through their purveyor, I asked if I could add six packages of bacon to their order to avoid the shipping costs. When the order arrived, my jaw dropped. For restaurant accounts, Benton bacon comes in 10-pound packages. I had just ordered 60 pounds of bacon. Over $400 worth!

I've always kept a jar of reserved bacon fat in the back of my fridge. I add new bacon fat to my jar at about the same rate as I use it up. But after the Benton bacon debacle, inflow exceeded outflow and I soon had several quarts of delightfully smoky Benton bacon fat taking up valuable real estate in my fridge. The time had come to use it or lose it.

I've used bacon fat to caramelize onions and roast garlic. I've added it to mashed potatoes in place of butter. Warm bacon fat, when combined with apple cider vinegar and a dash of maple syrup makes a tasty vinaigrette for a wilted lettuce salad. I've used it to sear steaks, salmon and scallops. But with such a large amount of smoky Benton bacon fat living in the back of my fridge, I decided to search the internet for other uses.

I learned that bacon fat could be used to make mayonnaise. Before the availability of commercial mayonnaise, anyone making mayonnaise at home would have used whatever fat they had on hand and bacon fat would have been common in American kitchens. So I made a batch of mayo with my smoky Benton bacon fat and it made a killer BLT.

The most interesting use I found for my smoky bacon fat... bacon-infused bourbon. Back in 2007, a bartender at a speakeasy in New York's East Village became enamored with the Benton's hams and bacon being served at David Chang's Momofuku Ssam Bar. He asked them to save the bacon fat so he could try "fat washing" bourbon to infuse it with a smoky aroma and taste. Because fat is soluble in alcohol, he found that by mixing an ounce of warm bacon fat with a bottle of bourbon, letting it infuse for four hours, then chilling and straining to remove the solidified fat, he could create a bourbon with a smoky essence. He'd use the infused bourbon to make a "breakfast"-themed Old-Fashioned by adding maple syrup, Angostura bitters and an orange twist.

Bacon Mayonnaise
This recipe is from Zingerman's Guide to Better Bacon by Ari Weinzweig.
Makes about 2 cups

Chill all the ingredients and utensils (including your mixing bowl) down to about 40 degrees F. Don't skip this step or the mayonnaise may break.

Put the egg yolks, mustard and 1½ teaspoons of the lemon juice into a blender or mixing bowl. Beat on high for two minutes, until well blended.

Add in the bacon fat (no need to add gradually if everything's properly chilled), continuing to beat until the mixture is thick. Depending on how thick and rich you like your mayonnaise you may or may not need the entire amount of fat.

Slowly blend in the remaining lemon juice, sea salt and pepper, whipping it pretty much continuously throughout. Adjust seasoning to taste.

Use extra-smoky bacon such as Benton's. Oscar Meyer won't infuse your bourbon with enough flavor.

Ingredients:
4 slices bacon, or enough to render 1 ounce of fat
1 750-ml. bottle of bourbon (I like Four Roses)

Preheat the oven to 400 degrees.

Place bacon on a wire rack set inside a rimmed baking sheet. Bake, rotating the baking sheet occasionally until the bacon is brown and crisp, 35-50 minutes (depending on the thickness).

Eat the bacon and reserve the rendered fat.

Pour bourbon into a wide-mouthed container.

When bacon fat has cooled a bit, strain about 1 ounce into the container and infuse for four to six hours at room temperature.

Place the container into an ice bath or in the freezer until all the fat is solidified.

With a slotted spoon, remove fat and strain the mixture through a cheesecloth or fine mesh strainer back into the bottle.

It will keep in the fridge for approximately two months.

To make a bacon-infused Old-Fashioned:

A different way to eat a peach