A cougar is spotted in Morgan County 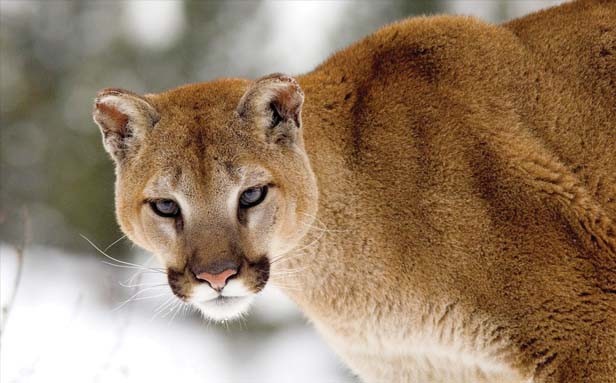 Everybody read about it – a high-tech hunter got video evidence that confirmed the presence in a Morgan County woods of an adult cougar, only the fourth known to have been sighted in Illinois since the 1870s, according to the state Department of Natural Resources.

The DNR staff are good scientists who don’t let their conclusions get ahead of their evidence. But less-than-scientific evidence of the big cat’s presence has been piling up for years, and for years was dismissed by wildlife experts. In deep southern Illinois, for instance, cougars are seen more often than sober college students. One would think that it was be easier to mistake a Democrat for a doughnut than to mistake a dog for a cat but lots of people do. Most of the animals reported as cougars in Illinois have probably been coyotes or feral dogs. However, the habitat and the food supply is there, so why shouldn’t the cats be there?

These days we know wild animals only from the sanitized images from TV wildlife documentaries and the zombie-like specimens trapped in zoos. We no longer appreciate their wildness or their strength, as is confirmed by the regular reports of grown people sticking their hands into the cages of zoos.

That wouldn’t be a problem if the only place people encountered cougars was the zoo. But the construction since the 1980s of exurban subdivisions surrounded by nature preserves and leafy stream bottoms means that people and cougars increasingly share the same habitat. The cats in such areas dine regularly on household pets, which they regard sort of like fast food. Cougars’ appetite for dogs is the best argument I know for strong wildlife protection laws.

In a 2004 article for Illinois Issues magazine, I noted that in old Illinois the big cats were known almost universally as panthers. The mappers of the U.S. Geological Survey list more than a dozen “Panther Creeks” along with their forks and branches, plus a Panther Grove, a Panther Hollow and a Panther Den, but not a single landscape feature in the state is officially named after the cougar.

But while we know why yesterday’s Negroes are now known as African-Americans and why yesterday’s Democratic Party is now known as Mike Madigan, it is not clear why the panther is now known as the cougar. I speculated that “panther” was much the commoner usage in the American South, and the early preference for the term in Illinois no doubt owes to the Southern origin of so many of the state’s settlers. (The cat is still popularly known as the panther in southern Illinois.)

The Morgan County folks interviewed by the SJ-R expressed unease at the idea of cougars in the neighborhood. True, the cat is astonishingly agile, strong and quick; California wildlife experts tell hikers that there is no point being alert to a cat attack in the wild, because you’ll never know they’re there until they’re on your back. However, frontier dwellers were more afraid of the gray wolf, mainly because wolves, like legislators, hunted in packs.

In settled areas, the cats are shy and withdrawing. In the summer of 2010 I got a chance to learn a little about life on the cougar-suburb interface in northern California. They feed mainly on deer in the wooded hills that surround so many subdivisions. In doing so they fulfill the ancient and honorable role of the predator by culling wild herds of sick or weakly animals. This fact alone endears the cats to nearby homeowners, since deer sneak down from the hills at night to lunch on garden plants like Bluto going down the cafeteria line in Animal House.

Cougars thus are seen in northern California nearly as often as coyotes are seen in Illinois, and often in surprisingly populated spots. A jaded public usually reacts with curiosity rather than alarm. When an adult cat was spotted in daylight within yards of a middle school, the school did not respond by locking down the campus. It merely reminded anxious parents that their favorite tax deductions have been taught how to behave when confronted by a cougar. Which is, try to make yourself look bigger than you are and make a lot of noise. That’s pretty much how schoolkids act all the time, which explains why cougars out there fear schoolkids in the same way that schoolkids fear math teachers.

And what should you do if you are confronted by a cougar and you are too embarrassed to behave like you’re a fifth-grader? You could try imitating a candidate for Congress; they also make a lot of noise and try to look bigger than they are, and the cougar is probably as sick of politics as you are. If it actually attacks you anyway, do what everyone else does – blame Obama.