These pear trees are pretty but problematic 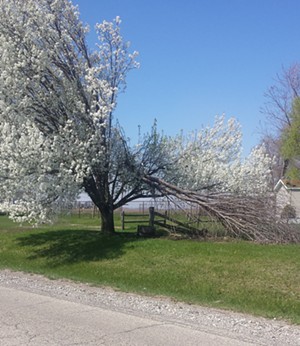 An ornamental pear with storm damage, a frequent occurrence with these trees.
Spring has sprung in Springfield. Redbud, dogwood, magnolia and other flowering trees are, or soon will be, in bloom. One flowering tree dominates the streetscape along many major streets and downtown. Although their prolific white blooms may appear pretty, ornamental pear trees have become a huge problem. They have been overplanted, spread easily and can overtake acres of land.

The Bradford pear tree is a thornless cultivar of the Callery pear, which is native to Asia and first introduced to the U.S. in the 1950s. Bradford pears became popular ornamental trees. As they grew, the trees suffered damage during windstorms due to their weak structure, and other pear cultivars were introduced. Although sterile, the Bradford pear can cross-pollinate with other pear cultivars, and seeds are transported widely by birds. Over time this has resulted in a proliferation of invasive pear trees with thorns several inches long that disrupt growth of other plants and insects. They provide no species diversity and also create problems for power companies. Some say the flowers smell like dead fish.

City arborist Jeffrey Reim says the city of Springfield considers the Callery pear invasive/undesirable and no longer plants it. According to a recent tree inventory of just the city's northeast quadrant, there are 183 pear trees on city property. Most local nurseries stopped selling them. Some states have banned them. Reim recommends redbud, serviceberry, American plum and flowering dogwood as alternatives.

This is just one example of an imported species having unintended consequences. To learn about the benefits of native species, join a program on Zoom on April 7 at 7 p.m., Oak Tree Research and the Advantage of Native Plants, presented by Amy McEuen and Lucia Vazquez from University of Illinois Springfield, moderated by Alderwoman Erin Conley. https://us06web.zoom.us/j/84702898868?pwd=dVZFaVJITDdGZzJHVkhnZzhPQTBnUT09