Read the decision. Other rights are in jeopardy. 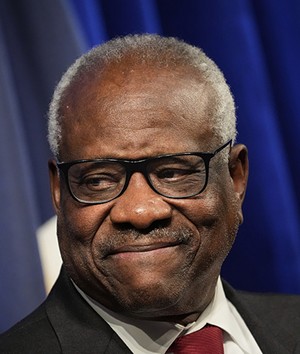 Associate Supreme Court Justice Clarence Thomas
When the decision of Dobbs v. Jackson Women's Health Organization was announced on June 24, I went online read it for myself rather than depend on the interpretation of various analysts and politicians. In the 213 pages there were many striking comments but one caught my attention more than any other.

"The resolution of this case is thus straightforward. Because the Due Process Clause does not secure any substantive rights, it does not secure a right to abortion." – Justice Thomas, page 118.

Whether you are pro-life or pro-choice, these words used as part of the rationale for the decision to overturn Roe v. Wade should give you serious pause. It suggests that the rights that many of us assume we have that protect us from the government (local, state or national) intruding into our private lives may not exist in the opinion of this court.

The Due Process Clause is the part of the 14th Amendment that states "nor shall any State deprive any person of life, liberty or property, without due process of law. ..."

Substantive due process is a legal principal that has been used in the past to define and protect rights (consistent with the undefined concept of liberty) that are not specifically mentioned in the Constitution from government interference. Since the rights have not been identified clearly in the Constitution, some question the validity of this concept.

An alternative view of the Due Process Clause would argue that it only guarantees a process whereby the executive and judicial branches of government fairly assure compliance with any legislative acts that deprive a person of life, liberty or property. In such a view, the Due Process Clause does not forbid the government from interfering with liberty-based rights, only that the government follows due process in the interference.

So whether you are happy or sad about the overturning of Roe v. Wade, stop and think about how else this rationale by the court can be applied to other rights that you thought you may have that are not specified in the Constitution. This is not just a theoretical exercise. Justice Thomas calls on the court to further evaluate the validity of other substantive due process rights.

While Justice Kavanaugh tries to reassure us (p. 132) that overturning Roe does not cast doubt on similar substantive due process rights involving marriage and contraception, I have to remember that this was a person who emphasized respect for precedent during confirmation.

Finally, the main opinion written by Justice Alito also considered what the right to abortion was when the 14th Amendment was ratified, including an appendix of 1860s state laws on abortion. Are we supposed to go back to when women could not own property?

So where does this decision leave us? It leaves us with a U.S. Supreme Court without true moderates that is tilted strongly to the right. It also leaves us with a fall election that will have a disproportionate impact on the future of personal liberty and perhaps democracy.

So when you consider your vote for U.S. Senate, remember the Mitch McConnell Rule: The president only gets to appoint Supreme Court justices if his party controls the Senate. We need a balanced court.

When you consider your vote for U.S. and state legislatures: Does the candidate still spout nonsense about the election being stolen and vow to "improve election integrity"? That is the candidate who is likely to attack your voting rights.

For all offices: Does the candidate attack vulnerable populations (LGBTQ, those wanting to use contraceptives, immigrants)? That is the candidate who someday may propose legislation attacking your substantive due process rights that you think are so safe.

So now is the time for activism in volunteering and financially supporting moderate politicians who can see both sides of a problem, as opposed to those with unidirectional blinders on.

The alternative is to passively sit on our butts and watch our freedoms and democracy slip away. And there are forces today that pray that this is exactly what we do.

Stephen Soltys, M.D., of Springfield, is a retired physician who is a political moderate and believes we need more moderates in office. He encourages you to read the decision for yourself at: https://www.supremecourt.gov/opinions/21pdf/19-1392_6j37.pdf

In a democracy, voters deserve a choice