The Watcher is slick, but muddles the ending; Bob's Burgers a pleasant distraction 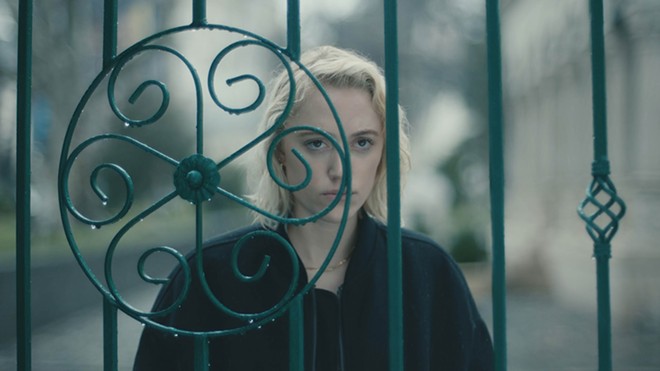 Is Julia being paranoid or is she simply feeling out of place? Having moved to Bucharest with her husband – a native of the country who's landed a job with great potential- she's had a hard time settling in. Grappling with the language, unemployed and without any friends, feelings of alienation threaten to overwhelm her. The fact that a serial killer is on the loose certainly isn't helping her feel secure, and neither is the fact that she can't shake the feeling that she's being followed by the creepy guy who lives across the street, the one who has a bad habit of looking in her window. Surely, the ever-mounting feeling of dread is all in her head...isn't it?

There's a great deal familiar about Chloe Okuno's Watcher, a slickly produced feature that relies on the viewer's previous knowledge of "women-in-danger" thrillers. All of the tropes are here, from the gas-lighting husband (Karl Glusman) to disbelieving police officers as well as a red herring or two to throw us off the scent. And while the viewer may experience a sense of déjà vu, there’s no question Watcher is executed with great skill as Okuno, aided greatly by composer Nathan Helpern, creates a genuine sense of unease.

As Julia, Maika Monroe does a masterful job portraying this woman as she slowly come apart at the seams, her initial sense of shaky confidence chipped away at by her fear and the indifference of those around her. She and her co-star, Burn Gorman, as her "maybe he is, maybe he isn't" stalker deserve better than the ending Okuno settles on. In keeping with the metaphor of whether they stick the landing or not, let's just say the film's legs shatter beneath it as its preposterous conclusion plays out after an otherwise exceptional 90 minutes. In theaters.

There's a sense of optimism about Loren Bouchard and Bernard Derriman's Bob's Burgers Movie that, amidst the turmoil of our everyday lives, you'll likely be eager to embrace. For the uninitiated, the animated series, now in its 12th season, focuses on Bob Belcher, his wife Linda, and their three children Tina, Gene and Louise, their lives revolving around the titular restaurant, which is eternally in peril.

As their big-screen adventure unwinds, we're told the Belchers will be foreclosed on unless they can pay off their loan in seven days, Tina is dealing with an unrequited crush, Gene is concerned about his future as a musician and Louise has to contend with a group of bullies who have made her feel self-conscious about her ever-present pink, rabbit-ears hat. (I know, it doesn't sound like much, but it's a rather big deal to an 8-year-old).

If you don't like word play such as the store next to Bob's being named "Sensu-Wool," which refers to its inventory of lingerie made from wool, then this is not the movie for you. However, if this tickles your funny bone, you'll likely respond to the rapid quips and clever puns that are dispensed with wicked frequency as the Belchers try help their landlord Mr. Fischoeder's (pronounced "Fish Odor"), who's been falsely accused murder. The jokes and gags are consistent throughout, but it's the sense of optimism each of the characters cling to that has the most lasting effect. Yes, it's just a silly cartoon, but its adherence to promoting the strength of family and faith in our bleak age ends up being the through-line that sustains our interest in, and hope for, the Belchers. In theaters.