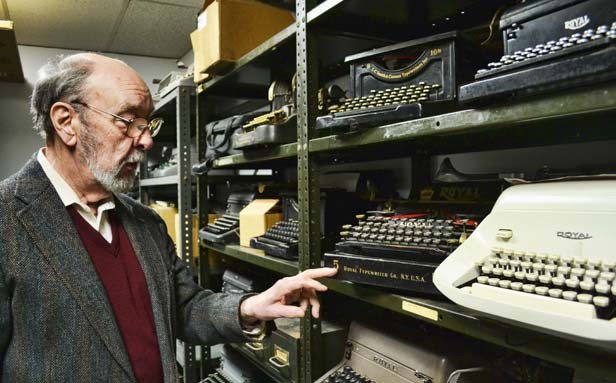 In February of 1949, at the age of 18, Ben Bushnell started working for Royal Typewriter Company in Springfield. He had no idea then that his job would lead to a lifelong hobby.

Bushnell began his career as a delivery boy for Royal and eventually became a service technician, but in May of 1974 he was given a new opportunity. After he had been with the company for 25 years, Royal closed. Bushnell bought the business, acquiring all the office equipment, including the typewriters.

He began building his office equipment business as he continued to acquire equipment when local businesses closed. Now located on South Dirksen Parkway, he owns 35 to 40 typewriters, including machines from Royal and Oliver typewriter companies. His oldest typewriter is a German machine made by Blickensderfer Manufacturing Company in 1889. He said he thinks his Blickensderfer is worth $400 to $500.

With three models displayed in his office, he said the old typewriters are a good conversation starter. “I joke around with the customers and say, that typewriter is older than you, or you look older than the typewriter, and it starts a rapport and lets me talk to people,” he said.

He doesn’t see antique typewriters often, but he has seen them on display in pharmacies and various stores. He said he has even noticed moviemakers from Hollywood on the hunt for typewriters to enhance scenes when they are trying to recreate certain decades in their movies.

Bushnell, now 82 years old, reflected on his time with Royal Typewriter Company and said his experience was pleasant and it allowed him to see much of the world.

He said society’s transition from typewriters to computers was predicted for quite some time, but he didn’t think it would ever happen. “They told me years ago that the newer typewriters would just have key switches on them and buttons, as opposed to the lever and springs, but then it came along real quick,” he said. He was approached with an opportunity to market computers, but he was not interested.

“I wonder about kids in school today, how do they learn anything? They don’t have books, they don’t have typewriters, everything’s on a computer and a computer has all the answers,” he said. However Bushnell did admit to being intimidated by computers and offered this piece of advice. “Everybody tells me if they buy a computer and they don’t know how to use it they just ask their 5-year-old grandson and he’ll know everything about it,” he said.

He said he still uses his typewriters to fill out forms, type on envelopes and for personal notes.

Although his business is predominately repairing modern office equipment like copy and fax machines, along with his Budget truck rental service, he sill gets plenty of calls to repair and help maintain typewriters. He said banks, post offices and State of Illinois offices still use typewriters.

What were we thinking?